Gary Gilmour, born June 26, 1951, was an Australian all-rounder whose obvious talent was never fully recognised due to a number of off-field issues.

Gary Gilmour, born June 26, 1951, was an Australian all-rounder whose obvious talent was never fully recognised due to a number of off-field issues. Shiamak Unwalla lists out 10 interesting facts about the man who was once compared to Alan Davidson.

1. Excellent domestic debut: The signs were there from an early age. Making his debut for New South Wales as a 20-year-old, Gilmour hammered 40 and 122, and took two wickets as well against South Australia.

2. Impressive on Test debut: Gilmour continued his trend of impressing on debuts when he hit a whirlwind 52 off 58 coming in at No. 9 before taking four for 75 as Australia beat New Zealand by an innings.

3. World Cup hero: The 1975 World Cup was a strange one for Gilmour. He missed out on all of the league games before finally getting a chance in the semi-final against England. Almost nonchalantly, Gilmour ended up taking six for 14 in 12 overs (the World Cup was 60-overs, with each bowler getting a maximum of 12 overs), taking the first six wickets to fall. He was far from done; coming in at 39 for six in the chase, he also top-scoring the match with an unbeaten 28-ball 28. The semi-final was not a one-off affair either; he lit up the final with 5 for 48 as West Indies made 291, and was looking good during his brief innings of 14 before getting out. He had the highest batting strike-rate of the match. West Indies won, but with 11 wickets in two games, Gilmour was probably the most outstanding player of the tournament.

4. The best ever: The semi-final spell against England was rated as the greatest-ever ODI spell in history by Wisden.

5. Revelling in revelry: Doug Walters and Gilmour once spent all night drinking and resuming (yes, they were the unbeaten batsmen overnight) their innings the following morning, very much still under the influence of alcohol. The match in question was against New Zealand at Christchurch in 1977. Walters had spent the eve of the Test getting drunk, and unfortunately had to bat quite early due to a spate of early wickets. Walters and Gilmour were the unbeaten batsmen at the end of the day. The duo then hit the bottle again that night! The next morning, both still rather inebriated, proceeded to flay the New Zealand bowling to all ends of the ground in a record 217-run alliance as Gilmour scored his first and only Test ton.

6. Injury and decline: Despite the oodles of talent he possessed, Gilmour s fitness was never anything to write home about. He suffered a foot injury that was misdiagnosed, and his form waned after that. He was never able to break back into the side after being dropped, and retired from First-Class cricket at 29.

8. Helped by the skipper: Gilmour s health declined later in life and, in 2005, was in dire need of a liver transplant. He was helped immensely by his former captain Ian Chappell, who conducted an auction to help raise funds for the operation.

9. Tragedy: One of the saddest moments for Gilmour was the passing of his son Clint from brain cancer at the age of 33.

10. End of the journey: Gilmour himself passed away on June 10, 2014 aged 62. His former teammate Kerry O’Keeffe said of him, He didn’t pick up the bat to block. You can’t block with an axe. And so it was, for Gilmour was someone who played the game for the love of the game. He did not care about stats, and was not disliked by anyone he played with or against.

Matthew Hayden in nude on top of a cable car! 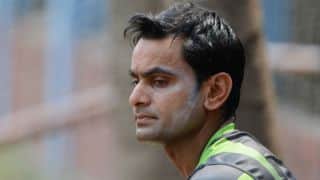