A TV studio rumored to be haunted by spirits and ghosts has been restored to normalcy after it was frequented by former international cricketers Danny Morrison and Navjot Sidhu for recording shows during the ongoing Indian Premier League (IPL) championship. A TV studio rumored to be haunted by spirits and ghosts has been restored to normalcy after it was frequented by former international cricketers Danny Morrison and Navjot Sidhu for recording shows during the ongoing Indian Premier League (IPL) championship.

Sources say that at least 23 ghosts resided in different corners of the studio when it was taken on hire by TV channel SET Max, but now all of them have left.

“They left after they couldn’t bear the shock waves originating from the vocal chords of Sidhu and Morrison,” claimed Satish, a cameraman who clearly remembered being slapped on his butts by a ghost during the first shoot.

Though his friends claimed it was Danny Morrison who pinched his butts, he claims it was a ghost. “No, Morrison was looking at Archana Vijaya at that time, I clearly remember that,” Satish clarified.

Owners confirmed that the studio was haunted by spirits and they were thinking of closing down the business when SET Max contacted them. “We had tried everything; including eating golgappa while sitting on camera tripods as was suggested by Nirmal Baba, but the ghosts didn’t leave the premises,” Irfan, the co-owner of the studio confirmed.

Irfan informed that the ghosts were first witnessed when the studio was used for shooting of the reality show “Rakhi Ka Insaaf“.

“We didn’t have any issues before that. But it seems that the ghosts, if they existed before, went totally crazy and mental after being exposed to Rakhi Sawant’s show,” Irfan revealed.

The studio then saw various minor incidents, spooking people at regular intervals during subsequent TV shoots – the spookiest being KRK (Kamaal Rashid Khan) talking about India’s foreign policy towards Latin American nations while he was shooting for a Bhojpuri song.

“We were shit scared,” Irfan said. “We knew that the ghosts were playing dirty games and the news was spreading in the industry. We were mentally prepared to shut shop when SET Max contacted us for IPL. There has been no incident in the last three weeks,” the visibly happy studio owner confirmed.

Experts claim that the ghosts had deserted the building after Morrison and Sidhu scared the unsuspecting souls with ghoulish guffaws and unnerving expressions.

“A ghost even left a suicide note,” claimed a spot boy, who was shouted down by Irfan.

“We just have to wait till the end of the IPL for Morrison and Sidhu to leave, and our studio will be free of all kinds of ghosts – dead or alive!” 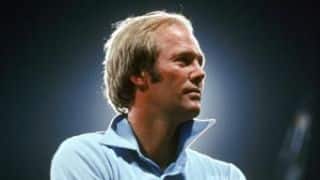