Successful captains like Ponting, Lloyd and Vaughan had to face defeat in their last Test.

South Africa fought tooth-and-nail until the last hour. For almost five years, South Africa had been unbeaten in Test series — in the midst of an amazing run that saw them surge to the top of the Test rankings. It was down to the last session as the tail hung on to give its leader a fine send-off. But, the Australians, the last team to beat South Africa in a Test series, were running in with their tails up. And, a victory in the dying minutes ended South Africa’s glorious run. That also put an end to Graeme Smith’s time at the helm!

Smith would walk into retirement life with an impressive resume as a captain in Test cricket. In 109 Test matches, he has won a remarkable 53, the most in history. In all, he has lost only 29 Tests. It was quite ironic that he ended his Test career with a defeat. For a man who led for almost 11 years, with an unparalleled winning record, it wasn’t the perfect ending. But, it is yet another instance where a successful captain has ended his captaincy with a defeat. Some of the names that immediately come to mind are Ricky Ponting, Clive Lloyd and Michael Vaughan.

Ponting, the most successful captain behind Smith, dominated with a world beating side at his disposal. However, once he lost his greats, he had a tough time maintaining the winning streak. During the Ashes 2010-11, he was in danger of losing a third series to the old rivals. And, during the Boxing Day Test, England trounced them by an innings and 157 runs. Ponting was ruled out of the next Test due to an injury and that paved the way for Michael Clarke to take over, a job he was handed full-time after the 2011 World Cup.

Lloyd played his last Test against Australia in 1984-85 at Sydney and had to endure an innings and 55-run defeat. It was due to the defeat in 1975-76 that Lloyd began that pursuit of domination. In 1984-85, he did win the series 3-0, but lost the last Test. That did end his glorious career, but his legacy lived on as West Indies remained unbeaten in a Test series for another decade.

However, the most interesting end involved Vaughan, as Smith was the man responsible for the end. Under pressure, during the 2008 series between England and South Africa in Old Blighty, Vaughan was trying to hold fort as the ground beneath his feet was shaky. And, when England had given South Africa 281 to win in the third Test at Birmingham, it was Smith who led the way with an unbeaten 154. Vaughan resigned and never returned to Test cricket again.

It is actually quite fascinating to note that Smith has seen three England captains resign. In 2003, Nasser Hussain quit after the first Test, famously forgetting Smith’s name in the lead-up to the game. Then in 2008, it was Vaughan who quit in the middle of the series. Andrew Strauss too ended his Test career and captaincy once Smith’s men stole the mace from England’s grasp in 2012. Smith’s own fortunes were a little different though. The mace stays with South Africa and he did announce his time before the game was lost. Nevertheless, it isn’t the perfect end for one of the game’s best skippers. 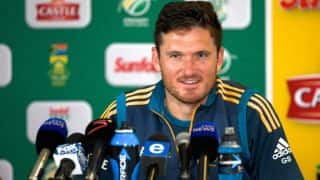 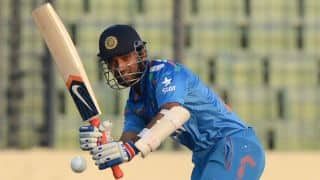