Graham Gooch saw Len Hutton stopping by him for a word of encouragement. The youngster needed courage and who could be better for that than one of the greatest batsmen in history?

An enthusiastic Graham Gooch had arrived in Birmingham in anticipation of a much awaited Test cap. However, on July 10, 1975, the day of the Test, selector Len Hutton asked himself a question that left him stumped. Abhishek Mukherjee recollects the one of the biggest psychological setbacks a cricketer faced on the day of his Test debut.

Australia had steamrolled England in the 1974-75 Ashes. Jeff Thomson had blown England away at The Gabba. Dennis Lillee was at his fiercest. Lillee and Thomson induced such fear that Jim Laker, sitting in the stands, was afraid that someone would be killed. Colin Cowdrey had to be summoned out of retirement. England captain Mike Denness dropped himself for the fourth Test, making way for John Edrich.

England were annihilated 1-4. As part of a surprisingly tight schedule, the Australians paid a return visit in 1975 for a 4-Test series and the inaugural World Cup. The series is typically remembered for two reasons: first, Michael Angelow, the first streaker at Lord s, made his appearance; secondly, a potential thriller had to be called off after four supporters of George Davis, a man sentenced to a 20-year sentence, had dug up the Headingley pitch.

But our incident dates before that, the first day of the series. The English selectors were obviously in search of a batsman who could stand up against pace. Len Hutton, one of them, spotted a young talent when the touring Australians played MCC.

The bowling attack had consisted of Lillee and Thomson (and Gary Gilmour, who had made a fantastic impression in the World Cup). The MCC batsmen had run into Lillee and had been reduced to 11 for 3 (Cowdrey included). David Lloyd had been holding up one end, but the rookie batsman soon overtook him. He had scored 75.

Hutton had seen what he needed to. A week later the youngster, Graham Gooch, made his Test debut at Edgbaston.

Gooch was obviously anxious. He used to look a lot different those days, without that trademark Zapata moustache (can you even imagine…?). True, his Essex captain Keith Fletcher was there in the side, but the nerves were certainly there. After all, he would be up against Lillee and Thomson, men who had wreaked havoc on his teammates earlier that year…

Finally, during a tense breakfast, Gooch saw Hutton stopping by him for a word of encouragement. The youngster needed courage and who could be better for that than one of the greatest batsmen in history?

Good luck, uttered Hutton, before going on to ask: Tell me, young man, have you played against the Australians before?

Gooch later admitted in his autobiography that he was sure Hutton had asked the question in jest. After a moment s indecision he blurted out: Yes, Sir, you re one of the selectors who picked me after I scored 75 against them for MCC at Lord s last week.

Exactly what impact Hutton s word had on Gooch is unknown. What is known, however, is that he edged one to Rod Marsh off Max Walker in the first innings and got a vicious lifter from Thomson in the second. In all he lasted 10 balls (3 and 7), and registered a pair on Test debut. 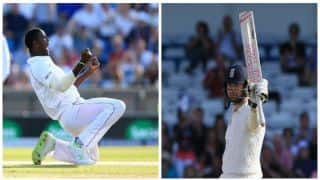 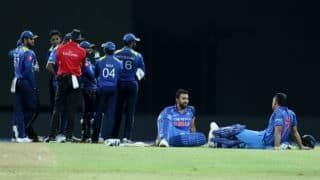