For a team that had topped the points table in the previous edition of the Indian Premier League (IPL) 2017, Gujarat Lions (GL) had a forgettable run in IPL 10.

For a team that had topped the points table in the previous edition of the Indian Premier League (IPL) 2017, Gujarat Lions (GL) had a forgettable run in IPL 10. Finishing at the second last spot in the IPL 10 points table, Gujarat Lions had a horrendous run this season with just four wins in 14 matches and defeats in the rest. Suresh Raina and Dinesh Karthik continued to wage lone battles for their sides, but could not do enough to take Gujarat Lions into the next round. Raina once again finished as the highest run-scorer for Gujarat Lions; whereas Andrew Tye played a mere six matches and ended up with 12 wickets as well as a few records. Let us take a look at how the Gujarat Lions players fared this IPL:

Ending up as the leading run-scorer for his team once again, Raina now has more than 800 runs for Gujarat Lions in the last two seasons. Raina smacked three fifties and averaged an impressive 40.18, but could not do more than that. As a captain, Raina tried leading from front but his selection of bowlers and their use could have been better.

The seasoned campaigner for Gujarat Lions, Karthik was left with a lot to do on several occasions. He made 361 runs at an average of 36.10 in 13 matches, and was effective behind the wickets with 8 catches as well. Karthik was involved in a 133-run unbeaten third wicket stand with Raina against Delhi Daredevils in their away game, which was the third-highest partnership for any wicket in the first round of this IPL.

The veteran batsman in the tournament bowed out midway due to an injury. McCullum did look promising at the start when he got a string of impressive scores, but his powers waned away soon. He scored 49 versus Rising Pune Supergiant, and in the next game made 64 against Mumbai Indians. In the next clash, McCullum smashed 72 against Royal Challengers Bangalore but had a string of low scores in the next three games.

Finch had an ordinary tournament, with just two half-centuries to his credit. In one of the matches, he had to sit out since his kit had not arrived at the venue in time. Finch s 34-ball 72 against Royal Challengers Bangalore was the only bright spot in a dismal campaign for him, which powered Gujarat Lions to a 7-wicket win.

The burly West Indian too was among the inconsistent performers for Gujarat Lions. With a 30-ball 47, Smith had helped Gujarat Lions trump Royal Challengers Bangalore (RCB) by 7 wickets. Later on, he scored 74 when Gujarat Lions were knocked out, against Kings XI Punjab (KXIP) showing signs that GL may spoil the party for the others. Smith scored two fifties.

For a batsman who showed a lot of mettle with his batting, Kishan made only one half-century. Kishan deserves rich praise for his aggressive batting at the top order, especially towards the ending stages for the team in the tournament.

In almost every match he played, Roy began aggressively but failed to capitalise. He left IPL midway to join England for their home series versus Ireland.

For someone who has had a fantastic build-up to the IPL 2017 tournament, it all proved to be a damp squib. Jadeja missed a couple of matches early on, but his joining had no impact whatsoever in the team s fortunes. For a bowler who had taken a plenty of wickets throughout the home season, Jadeja claimed a mere 5 wickets at a strike rate of 45.6 in 12 matches.

Faulkner s numbers in a way show why he has lost the central contract with Cricket Australia. With a mere 54 runs and 6 wickets in more than half matches for the team in the tournament, Faulkner looked a pale shadow of his best.

For a bowler who waited for close to three seasons in IPL to play his first game, Tye celebrated his debut with a hat-trick as well as best bowling figures for any bowler in his first match. Tye finished with 12 wickets in six games, proving himself as the best bowler for his side. He also had the best economy rate among all who played three or more matches, at 6.71.

The young Kerala pacer was very impressive in his debut IPL season. Though he could not bag a lot of wickets, but Thampi s ability to mix the deliveries and keep the batsman guessing was the standout factor. He also scored 28 runs with a highest of 13 not out.

The old warhorse did not get a lot of games and he remained ordinary with his bowling as well.

The left-arm pacer might have added more pace to his bowling and has been consistent with it, but none of it amounted to wickets in the tournament.

For a bowler who had played a match-winning role in one of the wins last year, Kulkarni had an ordinary run this IPL. He also proved expensive with an economy rate of 9.18.

Soni was drafted into the side in place of Shivil Kaushik, who bowed out of the tournament due to an injury. With a mere 2 wickets in seven matches, Soni does not appear to be a smart buy for Gujarat Lions.

For an all-rounder whose exclusion in IPL 2017 auction was created a lot of furore, the entry late into the tournament did not bring any good result. He featured in one match, bowled 2 wicketless overs for 26 runs and scored a mere 2.

He played only one game, against Kings XI Punjab (KXIP) and claimed 1 for 42 off his 4 overs.

He too was ruled out due to injury, but not before producing an impressive opening spell of 2-0-7-1 against Kings XI Punjab.

The veteran bowler made an ordinary return to the tournament after 1,426 days. His solitary wicket came against the former employers in Mumbai Indians (MI).

In his only game, against KXIP, he fell to KC Cariappa for a first-ball duck.

The bowler looked ineffective in all the games he played, and gave away runs at the economy rate of 9.54. 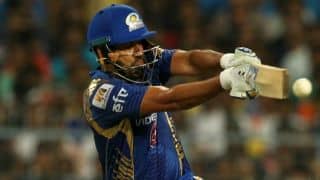