GL skipper Suresh Raina returns to the squad against KKR after the birth of his daughter.

Gujarat Lions (GL) will face Kolkata Knight Riders (KKR) in Match No. 51 of the Indian Premier League (IPL) edition 9. The match will be played at Green Park in Kanpur. GL were cruising to the playoffs of the IPL in the early stages of the tournament with 6 wins in 7 games. They however, went down the hill losing matches in succession and are now placed at 5th on the IPL Points Table, that too with a Net Run Rate (NRR) of -0.747. Captain Suresh Raina‘s return to the team will revitalize the team’s balance and as well as purpose. Lets look at the probable XI for GL against KKR for tonight. LIVE CRICKET SCORECARD: Gujarat Lions  vs  Kolkata Knight Riders , Live Score, 51st T20 Match, IPL 2016

Top Order: GL’s top-order with the likes of Brendon McCullum, Dwayne Smith and Suresh Raina in the top-3 can rip apart any bowling attack on its day. If McCullum and Smith can get GL off to a flyer, KKR might just be on the back foot. More so because their main strike bowler for this IPL season Andre Russell might have to miss out due to a leg injury. Suresh Raina on the other hand, needs just 16 more runs to become the second player, after Virat Kohli, to go past the 4000 runs mark in IPL. Raina meanwhile, also has been excellent while facing the leggie Piyush Chawla over the years and loves to thrash him. ALSO READ: Photo: Suresh Raina heads back to India to resume IPL 2016

Middle Order: The GL middle-order has been good in patches this IPL tournament. Dinesh Karthik contributed with half-centuries against KKR and DD and can certainly score some runs if he gets going. Aaron Finch ever since he has been coming in the middle-order hasn’t been able to contribute much. Replacing Smith with James Faulkner and promoting Finch as an opener might be a move that could reap benefits for GL. Dwayne Bravo, has been accurate with his bowling. His variations and the way he executes them are world-class. His batting though remains a concern for GL. The experimenting with Ravindra Jadeja didn’t pay off for GL and therefore he might be back to his spot lower down.

Bowling: The Gujarat Lions bowling unit will have to come back really strong against KKR after their poor show against RCB when Virat Kohli and AB de Villiers smashed them all-around the park. Praveen Kumar, Dhawal Kulkarni, Pravin Tambe and Bravo will have to have a plan against the KKR batsmen, especially Gautam Gambhir and Yusuf Pathan as they have been doing the major-run scoring work for the side. A change could be made in the spin department where Shivil Kaushik could make way for Sarabjit Ladda. 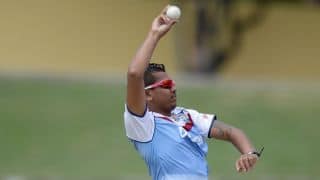