Habibul Bashar was Bangladesh’s mainstay in their era of building a side. Not only did he contribute with the bat, but his leadership also played a huge role in shaping the edifice of Bangladesh cricket.

Habibul Bashar, born August 17, 1972, was Bangladesh’s mainstay in their era of building a side. Not only did he contribute with the bat, but his leadership also played a huge role in shaping the edifice of Bangladesh cricket. Nishad Pai Vaidya profiles the former Bangladesh captain.

In recent times, Bangladesh has seen the rise of a young brigade led by Shakib Al Hasan. The results don’t really tell you a story, but there is no denying the fact that the current Bangladesh side has copious potential. Before the emergence of the current crop, Bangladesh were taking baby steps in international cricket — trying and testing numerous players. Through that difficult stage, Habibul Bashar was the mainstay of the batting and later became a captain who guided them to raise the bar.

Born in Nagakanda, Kushtia, Bashar first made it to the Bangladesh Under-19 side for the Asia Youth Cup in 1989. During that tournament he played alongside future internationals — Sourav Ganguly, Ajay Jadeja, Moin Khan and Marvan Attapatu to name a few. In September 1993, Bashar was part of a Bangladesh Cricket Board side that toured India to play some representative sides. He kept playing for Bangladesh’s representative sides until he was handed an ODI debut against Sri Lanka during the Asia Cup in Sharjah in April 1995.

Batting at No. 3, Bashar scored 16 off 35 balls as Bangladesh slumped to a 107-run defeat. In his next game against Pakistan, Wasim Akram was too hot to handle and he was bowled for a blob. From there on, Bangladesh had to wait for two more years for their next ODI in the Asia Cup in 1997.

Another duck against Pakistan followed, but he still made it to the Bangladesh squad for the tri-series also involving Kenya and Zimbabwe in Nairobi. In his first game there, he scored a brisk 70 — stroking 4 fours and 3 sixes — as Bangladesh were chasing 306 against Zimbabwe. They did not make it, but Bashar had certainly made a statement. Although, he did not score a lot in the remaining games, he did manage to book his spot for the tour to New Zealand that followed — where Bangladesh made their First-Class debut.

However, Habibul did not score consistently and the following year, he wasn’t in the squad for the 1999 World Cup. Later that year, he did return to face the West Indies in a short ODI series and also played for Bangladesh’s representative sides.

In October 1999, he had his first major success when he smashed an unbeaten 143 in the First-Class encounter against England A at Dhaka. It came against an attack comprising future internationals such as Paul Franks, James Kirtley and Chris Schofield. By the dawn of the new millennium, his form also picked up in domestic cricket and an innings of 85 against the visiting MCC strengthened his international prospects.

Bashar was now back, again for the Asia Cup, which was hosted in Dhaka in mid-2000. Against India, he managed to score 57, but the visitors were too strong. It was around then that Bangladesh were pushing for Test status. The victory against Pakistan during the 1999 World Cup had strengthened their chances and in November 2000, they strode out in the white flannels to face India.

With a huge crowd present at Bangabandhu, Bashar looked a part of the setting as he caressed and drove his way to 70 in his maiden Test outing. Aminul Islam was holding fort at one end, but Bashar essayed strokes through the off-side with ease. There was minimal footwork, just an initial shuffle, as he merely guided it with full timing.

However, throughout his career, he had this tendency of being a compulsive puller and hooker. At times, it would fetch him plenty, but would also plot his downfall. That is exactly what happened in the first innings there as he pulled a short one from Zaheer into the mid-on’s hands. Bangladesh did managed to give India a few scares, but could not sustain the pressure as they collapsed in the second venture — where Bashar scored 30.

In their initial days, Bangladesh were struggling to convince people of their Test status. However, Bashar looked a part of the setting as he was fairly consistent. There were losing games, but Bashar would be left to fight on his own. In one such game at Chittagong in 2001, he reached his first Test hundred against Zimbabwe as Bangladesh faced a mammoth 542 set by their opponents. They were made to follow on and even in that effort, Bashar stood out with 76. Later, when they played their first Test in New Zealand, he scored 61 in his first outing.

The victories were yet to come and Bangladesh had been severely criticised. The disastrous 2003 World Cup campaign was tough on them. Dav Whatmore was appointed the coach and Khaled Mahmud was captain. On the tour to Pakistan in 2003, Bashar was a class apart as he was the leading run-scorer in the series with 363 at 63.16. In the process, he had scored 3 fifties and 1 century — which came in the first Test at Karachi. In the third Test, Bangladesh gave Pakistan a scare and it was Inzamam-ul-Haq’s determined vigil that stole a one wicket victory.

Mahmud’s captaincy wasn’t inspiring much and before the tour to Zimbabwe in early 2004, Bangladesh appointed its most dependable batsman as the leader. In the third ODI (the first two were abandoned), Bangladesh recorded a shock eight-run victory over the hosts. Zimbabwe still had a strong side with the likes of Grant Flower and Heath Streak. However, Bashar led from the front as his innings of 60 helped Bangladesh post 238 — one they defended successfully. Later, they also managed to draw a Test match — which was a huge achievement for them.

Bashar’s captaincy brought some light into Bangladesh cricket. On their tour to the Caribbean in 2004, they nearly gave West Indies a scare. In the first Test, Bashar hooked and pulled his way to 113 in only 131 balls. Mohammad Rafique also chipped in with a ton as they posted 416. In reply, West Indies stumbled and were bowled out for 353. Bangladesh rarely found themselves in such situations and they collapsed in the second innings. Khaled Mashud’s ton saved the day and they managed to hold on for a draw.

It was clear that Bangladesh were gradually building their reputation. They could no longer be taken lightly as India found out on Boxing Day in 2004. A tsunami had struck that day and the Indians were also swept away by their opponents. Although Bashar did not score a lot in that game, his captaincy and coordination with the bowlers stunned the Indians by 15 runs. It was a historic victory and a triumph over their neighbours is one they always cherish. The foundations were being laid for later.

Then came the big one — a maiden Test victory. Weakened by their internal issues, Zimbabwe sent their side to Bangladesh for a 2-Test series and five ODIs. In the first Test at Chittagong, Bangladesh played like a unit with each member chipping in with crucial performances. Bashar led from the front with 94 and 55 as Bangladesh celebrated a 226-run victory. This was undoubtedly a huge moment in Bangladesh cricket. In the ODI series that followed, Bangladesh were 0-2 down, when they fought back to clinch the series 3-2. Even then, Bashar was consistent.

With all these renewed hopes, Bangladesh toured England in the middle of 2005. The Test matches were a rude awakening for them and they were humbled by the superior side. However, they nailed the big fish in the ODIs when they beat the World Champions, Australia at Cardiff in a thrilling finish. Mohammad Ashraful’s ton was the major force, but take nothing away from Bashar’s 47, which steadied the ship and allowed Ashraful to chance his arm.

The next year, Australia were given more nightmares at Fatullah in a Test match. Bashar’s 76 and Shahriar Nafees’ 138 took them to 427. Australia struggled, huffed and puffed to be bowled out for 269 — largely due to Adam Gilchrist’s 144. It was a situation they were rarely used to and Bangladesh collapsed for 148 in the second innings to leave Australia with a target of 307. Ricky Ponting essayed a captain’s knock to brush aside nerves and clinched a narrow 3-wicket victory.

It was then that Bangladesh also started focusing on the 2007 World Cup and brought in a new brand of youth. Players like Nafees, Shakib, Mushfiqur Rahim and Tamim Iqbal came into the side and established themselves before the big tournament in the Caribbean. When Bangladesh left for that tournament, Bashar was quietly confident although they were pitted with Sri Lanka, India and Bermuda.

What happened next was amazing. India were stunned by the young Bangladesh side and made it through to the second round at their expense. Bashar did not have a very good time with the bat, but oversaw the development of the side. During that tournament, they also managed to beat South Africa to further strengthen their reputation. However, Bashar’s time was running out.

India toured Bangladesh immediately after the World Cup and took away both the ODI and Test series. Bashar’s form was worrying and Bangladesh were unmistakably stepping into a new era. His ODI career finished after that tour.  He continued to play Test cricket until the South Africans visited in 2008, but a string of poor scores finished his international career.

Post his axing, Bashar did hone his skills in ICL, during which he captained Dhaka Gladiators and the ICL Bangladesh XI. He returned to Bangladesh’s First-Class cricket in 2010 and signed off with a century in his final game. Today, he is a selector with former teammates Akram Khan and Minhajul Abedin.

Although, he played in an era where Bangladesh were finding their feet, there is no denying Bashar’s contribution. He was the one who laid the foundations for the youngsters and they are building on it today. From 50 Tests, he scored 3,026 runs at 30.87 with 3 tons and 24 fifties. In 111 ODIs, he finished with 2,168 runs at 21.68 with 14 fifties. These are good figures for someone whose team was consistently found wanting against some superior opponents at the highest level.

Bangladesh cricket history will surely recognise him as a pioneer in this sport if they reach a level where they confidently lock horns with the superior teams on a consistent basis. It’s still work in progress for Bangladesh. 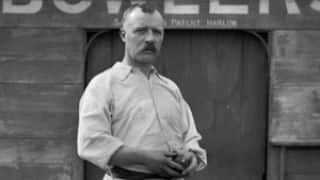