Rohit s heroics, Dale Steyn s fiery spell and a thrilling finish made the Deccan Mumbai game a memorable clash. Unfortunately, a controversy surfaced which took some sheen off the remarkable game. The sight of Harbhajan Singh and Munaf Patel arguing with the umpires over Kumar Sangakkara s dismissal was disappointing to say the least. 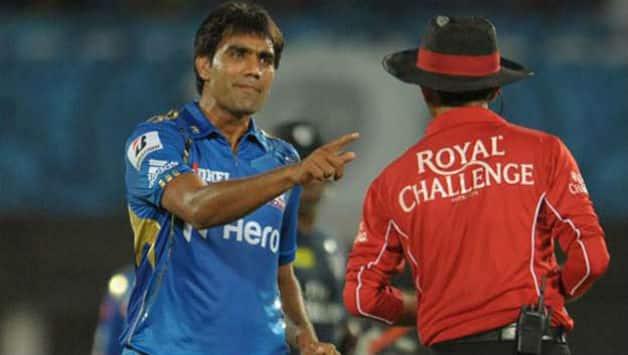 Rohit’s heroics, Dale Steyn’s fiery spell and a thrilling finish made the Deccan – Mumbai game a memorable clash. Unfortunately, a controversy surfaced which took some sheen off the remarkable game. The sight of Harbhajan Singh and Munaf Patel arguing with the umpires over Kumar Sangakkara’s dismissal was disappointing to say the least.

It is true that the umpire didn’t make the right call, but the duo didn’t have the right to react aggressively and almost bully the official. A polite but firm request may have been enough to deliver the point. However, Harbhajan charging towards the umpire and Munaf pointing fingers were acts that brought the game into disrepute. Deducting a few fairplay points wouldn’t be enough and they should be reprimanded.

Although the right decision was made in the end, the circumstances didn’t merit the result. Harbhajan must realise that Tendulkar has handed him a huge responsibility – one that the latter carried out with utmost dignity. With such displays, Harbhajan is tarnishing that legacy and spoiling his reputation. Munaf too is a senior Team India player and his involvement in the incident doesn’t set the right example for the youngsters.

Nevertheless umpire Johan Cloete has a few questions to answer. With technology available, wasn’t it his responsibility to rule out a contrary possibility despite being clear about his judgment? Even when umpires are certain about run-outs, they choose to go upstairs to avoid human errors. It is an unwritten code that has generally been followed, barring a few exceptions. Had he referred it immediately to the third umpire, we would have been spared of the ugly incident. However, that doesn’t absolve the two Mumbai players of their wrongdoings.

While the Mumbai Indians bask in the glory of their spectacular win over the Deccan Chargers, it is imperative that they do not ignore their fragility while chasing. It was only due Rohit Sharma’s brilliant knock that Mumbai crossed the line and avoided a recurrence of their previous defeat. While chasing, Mumbai look tentative and unsure of their approach – a tendency they have displayed for quite some time. With their eyes set on the Indian Premier League (IPL) title, they must address the crisis or face the ignominy of defeat.

If one goes through the Mumbai Indians’ records since the start of the 2011 season, one would find that they haven’t been the best of chasers. Most of the successful run-chases have occurred due to some late hitting which followed a prolonged struggle throughout the innings. When such extraordinary efforts haven’t come, Mumbai have fallen flat. This unwanted trend was responsible for their decline during the IPL 2011. Astonishingly, it continued into their victorious Champions League T20 (CLT20) 2011 campaign.

In the concluding phase of IPL 2011, Mumbai won two thrilling games that went down to the wire. In their final league game against Kolkata Knight Riders at Eden Gardens, James Franklin and Ambati Rayudu pulled a rabbit out of the hat as they scored 23 runs off the final over to win the game. A few days later, in the Eliminator against the same opposition, they inadvertently took the game into the final over after being in firm control of the run chase. The Royal Challengers Bangalore ensured that Mumbai didn’t get away with it in the Qualifying final.

The CLT20 2011 would be remembered for Mumbai’s fairytale triumph that came in the absence of their big players such as Sachin Tendulkar, Munaf Patel and Rohit. The campaign started off with two thrilling run-chases against Chennai Super Kings and Trinidad and Tobago. Against Chennai, Lasith Malinga and Harbhajan Singh snatched defeat from the jaws of victory with some unbelievable batting. The match against Trinidad was a shocker as they made heavy weather of a paltry target of 99 – one that was achieved on the last ball with one wicket to spare. It was their good fortune that they batted first in the semi-final and the final of the competition. The results may have been different had it been otherwise.

Let us fast forward to the ongoing IPL. A few days ago, Mumbai should have chased 130 against Pune Warriors India at the Wankhede Stadium. The pitch wasn’t the easiest to bat, but with the batting line-up they have the target shouldn’t have been difficult had the batsmen applied themselves.

Mumbai’s last two games may have contrasting results, but have two major similarities. In both the games, they lost early wickets and went into a shell. The defensive mindset got the better of them as the pressure intensified. The targets weren’t big and were made to look humongous due to some slow batting in the middle overs.

Quite a few people may argue that Sachin Tendulkar’s absence has a lot to do with Mumbai’s fragility while chasing. However, even when he was there during the IPL 2011, Mumbai had faltered during quite a few run chases. His comeback would certainly strengthen their top order, but they cannot rely on him alone to change their fortunes. The entire batting line-up has to lift their game in the face of a target.

As one of the favourites of the tournament, Mumbai have to be more positive while chasing and stamp their authority. The hallmark of a champion side is its dominance in all scenarios whether it is defending a total or going after it.