Hemant Kanitkar could bat, and performed a second role behind the stumps with his steady presence.

Hemant Kanitkar, born December 8, 1942, was one of the most eminent wicketkeeper-batsmen in Indian domestic cricket in the mid-1970s. Abhishek Mukherjee looks at a Maharashtra stalwart who could never get going at top level.

Hemant Shamsunder Kanitkar could bat, and performed a second role behind the stumps (if needed) with his steady presence. His peak, unfortunately, came in the mid-1970s, when the Indian batting line-up was dominated by Sunil Gavaskar and Gundappa Viswanath, among others. With Farokh Engineer (who eventually gave way to Syed Kirmani) controlling proceedings behind stumps, Kanitkar could never break through as a wicketkeeper either.

Despite that, Kanitkar had an impressive First-Class career. Standing at 5’9”, Kanitkar was brave, never flinched against pace, never seemed to panic (Gavaskar called him “calm, unhurried”), and had the technique to score 5,006 First-Class runs at 42.78 with 13 hundreds. He often kept wickets, and finished with 70 catches and 20 stumpings.

Born in Amravati, Kanitkar was the son of a building contractor. He made his First-Class debut three days before his 21st birthday, and had an immediate impact: against Saurashtra he slammed 151 not out. He became the second player to score a hundred on debut for Maharashtra (the first being Khandu Rangnekar). Kanitkar’s score also remains the third-best by a Maharashtra batsman on debut, surpassed by only Kaushik Aphale (158) and Vijay Zol (200 not out).

Kanitkar did not do much of note for the next few seasons. He eventually came back in emphatic manner in the Ranji Trophy quarter-final of 1970-71. He scored 250 and added 314 for the second wicket with Madhukar Gupte. It was the highest score by a Maharashtra batsman since Bhausaheb Nimbalkar’s 443 not out.

Maharashtra lost the final to Bombay, but Kanitkar was the top-scorer in that season’s Ranji Trophy with 687 runs at 98.14 with 2 hundreds. He would repeat the feat in 1973-74, this time with 629 at 69.88, again with 2 hundreds. Between the two seasons, Kanitkar was named Indian Cricket Cricketer of the Year in 1973.

When West Indies toured India in 1974-75, Kanitkar put up an excellent show for West Zone, scoring a brave 70 not out against Andy Roberts and Keith Boyce. He was drafted into the side for the first Test at Chinnaswamy, where he made his Test debut alongside two men who went by the names of Viv Richards and Gordon Greenidge.

Tiger Pataudi fielded first, and though West Indies finished Day One on 212 for 2, the second morning saw a turnaround. Bhagwat Chandrasekhar and Srinivas Venkataraghavan bowled out West Indies for 289. Kanitkar walked out when Roberts had Engineer caught by Richards at short-leg.

He faced a nightmarish delivery first up. Gavaskar later wrote in Sunny Days: “The first ball from Andy Roberts, which was a real scorcher, hit him bang on the gloves as he played defensively. To this day I wondered how nothing happened to his fingers. The blow was sickening even to me, at the non-striker’s end.”

Gavaskar soon fell to Vanburn Holder, as Richards plucked another catch out of nowhere at short-leg. Viswanath brought some stability, and as the partnership looked solid, there was a misunderstanding as both Kanitkar and Viswanath found themselves stranded at the bowler’s end, the bowler next to them, ball in hand. Then Kanitkar started running, and somehow managed to beat the bowler’s throw to Deryck Murray.

Kanitkar reached his fifty, and was eventually stumped when he tried to hit a half-volley from Arthur Barrett. He had scored 65 with 11 boundaries. Gavaskar wrote: “He batted really bravely in the first Test innings despite the punishment he received. When he came in, his chest was black and blue from bruises he had received…When he returned to the pavilion his face was as expressionless as ever.”

The West Indians did not falter a second time. Greenidge and Lloyd slammed hundreds, and India were set 386. With Pataudi out with a dislocated finger and Engineer with a blow just over his eye, India had been reduced to nine men. Whatever chance was there of a fightback disappeared with Gavaskar falling for a duck. Opening batting, Kanitkar scored 18 before Holder claimed him. No Indian batsman crossed 22 as they crashed to 118.

Engineer recovered before the second Test at Kotla, but Pataudi did not. Under Pataudi’s instructions, Gavaskar had led the field in his absence at Chinnaswamy, but his finger was broken by a lifter from Pandurang Salgaonkar between the Tests. There was a lot of confusion (with Engineer announcing that he was captain), but in the end the selectors dropped Chandra (the only man who had bothered Richards at Chinnaswamy), retained EAS Prasanna, recalled Bishan Bedi, and made Venkat the captain.

Sudhir Naik opened with Engineer; batting at three, Kanitkar hit two boundaries before Roberts trapped him leg-before for 8. India eventually folded for 220 before Richards, in the absence of Chandra, took over: he added 120 with Lloyd, 72 with Bernard Julien, 124 with Boyce, and remained unbeaten on 192 as West Indies amassed 493.

India were no match against Lance Gibbs, who ran through them with 6 for 76. Kanitkar was one of the six; he was bowled for 20. India were all out for 256, and Kanitkar never played a Test again. On a lighter note, Venkat was relegated to twelfth man in the next Test at Eden Gardens.

Kanitkar played for three more seasons. It was perhaps a tad harsh that he was never recalled, given that both his Tests came against a strong opposition. In 1976-77, his penultimate season, Kanitkar scored 278 at 69.50 with 2 hundreds (he had scored 2 more the previous season as well) from 5 innings, but he decided to hang up his boots shortly afterwards.

Having done his BSc, Kanitkar continued with his family business as a building contractor. His son Hrishikesh, born a week before Hemant’s Test debut, went on to play 2 Tests and 34 ODIs, and led Rajasthan to consecutive Ranji Trophy titles. Another son Aditya went on to become a golf professional, and is currently a golf coach. Aditya’s wife Radhika Tulpule is also a tennis player-turned-coach. India vs Australia past encounters: Part 4 of 4 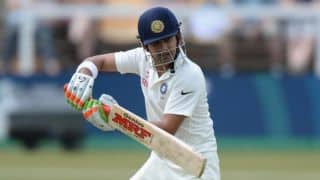