Indian batting has covered up glaring deficiencies in the bowling department. 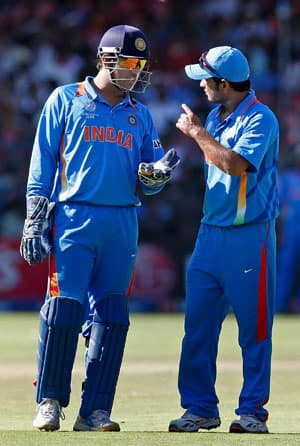 The optimists bracketed India among the pre-tournament favourties while the jingoists hailed the Men in Blue as champions-in-waiting. But only a miniscule minority of realists squeaked, amid the hype and hoopla, that’s India’s progress in the 2011 World Cup hinged heavily on the side’s anemic bowling.

For a long time now, the potency of the Indian batting has covered up glaring deficiencies in the bowling department. This weapon, many felt, would be considerably enhanced on the flat tracks of the subcontinent. There was also the belief that the subcontinent wickets would blunt the warheads of teams like Australia, South Africa and England that relied heavily on pace while at the same time place a team like India,  banking on three specialist spinners, in a favorable position.

As India found out quickly, reality check does not bounce! The first reality was that a total of 300-plus can no longer be considered a match-winning total – a point that was spectacularly hammered home by Ireland when they successfully chased England’s target of 327 and England’s near-successful chase of 338 in that tied game against India. The second reality check is that quality pace bowlers can cause considerable damage, whatever be the conditions as Mitchell Johnson, Lasith Malinga, Kemar Roach, Tim Bresnan and Zaheer Khan have proved so far in this championship.

India is sitting on top of the heap in Group B. But that position will give the team little comfort, given how the matches have panned so far.

So where have things gone wrong for India for me to strike the note of guarded optimism, if not downright pessimism?
The first mistake is a well-documented one: The resurrection of Piyush Chawla and the overlooking of a proven performer like Pragyan Ojha. Chawla was creamed by the English tailender that India almost lost from a winning position. He failed yet again against Ireland and was surprisingly chosen to play a third successive match – this time against Netherlands.

Chawla’s disastrous outings have read: 10-0-71-2 vs England; 8-0-56-0 vs Ireland; 10-0-47-2 vs Netherlands. In all three games, he was India’s most expensive bowler. It’s human to err, but it’s downright stupid to persist with an error. Foolhardy obstinacy can never be a virtue.

Harbhajan Singh was expected to be one of the two strike bowlers for India, alongside Zaheer Khan. But he has taken just two wickets from four outings in this World Cup and has been restrictive at best. When you factor the performances – rather, the non-performances – of the two spinners and juxtapose their report card with that of the Indian fast bowlers in this tournament, it does not augur well for India.

Shantakumaran Sreesanth was clobbered for 53 runs in five overs by Bangladesh and lost the confidence of the team management; Munaf Patel has been inconsistent while Ashish Nehra has been unimpressive in first outing in his own backyard of Delhi. One shudders to think the plight of the team had Yuvraj Singh not come to the rescue as a match-winning bowler.

Yuvraj is doing for India in this World Cup what Mohinder Amarnath did in India’s victorious campaign in 1983. But Amarnath played a great supporting role as a bowler; here Yuvraj is asked to be the lead actor! And that’s where they have to get it right if the script has to unfold to box office expectations.

Had India been chasing against Bangladesh, the script would have been lot different. That spirited performance by Bangladesh, against a mammoth Indian total of 370 for four, put the Indian bowling in proper perspective in the very opening game of the tournament.

The Indian batting machine, powered by Sachin Tendulkar’s hundred, scored 338 against England, but what seemed a match-winning score was made to look woefully inadequate as Andrew Strauss made mincemeat of the Indian bowling. It was only Zaheer’s genius with the old ball that brought about a dramatic transformation in the game and, in the end, allowed India to tie the game.

If there was further confirmation needed about the insipid Indian bowling, then successive matches against Associate nations Ireland and Netherlands gave ample evidence. In fact, had Mahendra Singh Dhoni or Yusuf Pathan got out early, India may well have lost the game to Ireland. And against Netherlands, India needed more than 50 runs with just the bowlers left to bat. But for the second time running, Yuvraj Singh bailed the side out if a possible ignominy.

The single biggest gain in the last one year has been Virat Kohli’s exemplary batting.

At No 4, Kohli is a sane and stabilizing influence in a side loaded with ballistic batsmen. But the run out against Ireland and the tinkering with his batting slot would have negated much of the confidence he had gained from that marvelous century on his World Cup debut. It will be suicidal for India to do anything that will dent the youngster’s confidence.

If sides like Bangladesh, Ireland and Netherlands have caused much grief to India, the alarm bells would be ringing in the Indian camp for the matches ahead. Dhoni has very little at his command to juggle around in case of bowling emergencies. In the light of frontline bowlers failing in a heap, it would make sense for India to abandon the four-bowler theory and go in for a fifth specialist bowler.

The team management cannot waste any further time in inducting the talented Ravichandran Ashwin in the eleven. Ashwin should open the bowling in place of Zaheer, who will be lot more dangerous with the old ball in the middle overs. And the time to unfold that strategy would have to be against South Africa on Saturday. It’s a game I would also like to see Sreesanth coming back into the team. He has done well against the South Africans in the recent series and it his confidence against the Proteas will be that much higher. Sreesanth is a strike bowler and if he finds his form and confidence, it will do immense good in the crucial matches ahead.

Matches are won on the field and not by TV hype. The team has to take their game to a higher level. If not, for at least four more years, Ritesh Deshmukh will not be able to eat chocolates, Sajid Khan will have to eschew non-veg, John Abraham will have to stay away from veg and Akshay Kumar will probably die of hunger! Get the point?!