With just 105 runs behind and nine wickets in hand, it’s Pakistan, who look sure to continue their good run on Day Three as well.

The first day of the two-match Tests series at the Sheikh Abu Naser Stadium in Khulna on Tuesday seemed to be a mixed day more or less, with a feeling that Bangladesh had outplayed the visitors. However, things completely changed on Day Two, and it was Pakistan who finished on top, but how? Ayush Gupta explains.

Bangladesh had battered Pakistan in all departments in the limited-over series, outplaying them in a way that seemed emphatic for the Bangladesh cricket. The first leg of the tour turned out to be a nightmare. READ: Mohammad Hafeez’s ton helps Pakistan end Day 2 on high against Bangladesh in 1st test at Khulna

However, Test cricket being a different ball game, a change was expected from Pakistan with the experience of Younis Khan and Misbah-ul-Haq in their ranks. Nevertheless, as the first day kicked off at Khulna, despite Pakistan gave a tough fight with the ball, as Bangladesh batsmen continued to make them sweat and signalled them that the Test series would be another tough battle for the tourists. At the end of the first day, Bangladesh had the advantage and it looked like they will be putting up a big first innings total. It was assumed that Bangladesh were going to continue their tough challenge the next day, resuming at 236 for four. SCORECARD: Bangladesh vs Pakistan 1st Test Day 2 at Khulna

However, as Day Two began, Bangladesh suffered a major damage in the form of their start all-rounder Shakib Al Hasan being dismissed for 25 by Zulfiqar Babar. However, the next pair of Mushfiqur Rahim and Soumya Sarkar was able to restrict Pakistan’s early celebrations, as they contributed 62 runs for the sixth wicket. It was the dismissal of Soumya for 33 by Mohammad Hafeez at the score of 305, that turned out to be the end of Bangladesh’s challenge. Just 24 runs were added following his dismissal  Bangladesh were bundled out for 332 in 120 overs, owing to some impressive show by Wahab Riaz and Yasir Shah, who claimed three each for 55 and 86, respectively.

Pakistan openers Sami Aslam and Mohammad Hafeez put up the opening stand for 50 runs.  The first wicket that Pakistan lost was of Aslam, dismissed for 20 by leg-spinner Taijul Islam.

Bangladesh would have fancied some more wickets, but it was just the beginning of misery as the pair of Hafeez and Azhar Ali seemed to be unstoppable and unbeatable. Both the men put up a 177-run stand for the second wicket by the end of the day and Bangladesh bowlers were just simply clueless on how to get rid of this pair. READ: Bangladesh tour of Pakistan 2015: Bilawal Bhatti to replace Rahat Ali

This is where the batsmen utilised the opportunity to attack by demoralising them and not giving them a single chance to get a breakthrough. They occasionally played strokes and were also defensive to good bowlers like Shakib and Rubel Hossain.

Bangladesh used a total of eight bowlers throughout the day, but none of them were able to deliver that could have brought smiles back to Bangladeshi faces. With just 105 runs behind and nine wickets in hand, it’s Pakistan, who undoubtedly looked to be at the top of their game and are sure to continue their good run on Day Three as well.

Pakistan acted like a world-class team, utilising the opportunity and attacking the weak spots of the Bangladesh team. Full points to Pakistan, especially their skipper Misbah-ul-Haq who showed some great captaincy skills, bringing on right bowlers at the right time.

The credit also goes to Hafeez and Azhar, who  batted brilliantly throughout the innings, and would be interesting to see how they go about their job,  and where does the ship end its journey. 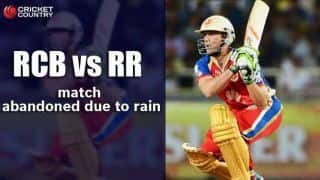