The post-tea session saw a good game-play from the Pakistan batsmen.

Pakistan finally came out of their mild poor start to the Test series on the opening day of the first Test of the two-match Test series against Bangladesh, at Sheikh Abu Naser Stadium in Khulna on Wednesday. Mohammad Hafeez‘s century and Wahab Riaz‘s three-wicket haul put Bangladesh on the back foot on Day 2 as both the team are well positioned to win this encounter, at present. LIVE Scorecard: Bangladesh vs Pakistan 2015, 1st Test at Khulna, Day 2

Earlier, Bangladesh batsmen, Mushfiqur Rahim and Shakib Al Hasan started the day with the score on 236 for the loss of four as they finished on Day 1. However, they lost wickets in a flurry at the closing stages before lunch and were eight down for 325. Shortly after the lunch, they were bundled for 332, with Mohammad Shahid dismissed for 10 by Wahab Riaz and Rubel Hossain, being the last man to be dismissed by the same man. Imrul Kayes was the highest scorer of the team with 80 runs, while Wahab was the highest wicket-taker in the innings with a figure of 3 for 55.

Following Bangladesh’s innings, it was Pakistan’s turn as the openers, in the form of Hafeez and Aslam walked out and batted good as they put-up the opening 50-run stand. However, Aslam was dismissed shortly after the stand and it was the pair of Hafeez and Azhar Ali, who took charge for rest of the session as Hafeez also scored his 11th half-century and Pakistan finished on 84 for the loss of one at tea. LIVE Updates: Bangladesh vs Pakistan, 1st Test, Day 2 at Khulna

The post-tea session saw a good game-play from the Pakistan batsmen as the on crease batsmen continued to bat through out the remaining session and put up a 127-run stand. During the innings, Hafeez scored his eighth Test century and also became the oldest opener in Tests cricket to score a century. It was also followed by Azhar, who scored his 19th half-century in Test cricket, as Pakistan closed the day on 227 for the loss of a wicket, with Hafeez unbeaten on 137. 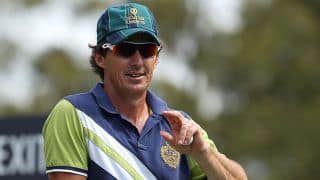