Huge pressure on Duncan Fletcher and Team India; it could be a make-or-break series for many

Huge pressure on Duncan Fletcher and Team India; it could be a make-or-break series for many

It's not easy to fill in the crater created by the retirements of two greats, Rahul Dravid and VVS Laxman. But it's extremely important that Team India's Generation Next quickly establish themselves in the Test arena. In that respect, the India-England Test series starting on Thursday is critical for the home team.

Captain MS Dhoni (left) and coach Duncan Fletcher will have to ensure that India wins, and wins emphatically against England in the Test series. It s a battle for survival, especially for coach Fletcher © Getty Images

It’s not easy to fill in the crater created by the retirements of two greats, Rahul Dravid and VVS Laxman. But it’s extremely important that Team India’s Generation Next quickly establish themselves in the Test arena. In that respect, the India-England Test series starting on Thursday is critical for the home team.

The series is equally important for Duncan Fletcher. His two overseas series in England and Australia as India coach have been an unambiguous disaster. This series against England is his first serious challenge in the familiar home conditions. He has absolutely no margin for error. It’s a fight for survival for the man who has lost all too quickly that the team gained under Gary Kirsten.

Expectations were high when Fletcher took over from Kirsten. The team was on an unprecedented high and his own reputation was formidable, after making England a force to reckon with. Before he could settle down, he was with Team India in the West Indies. The Indian team’s performance was way below par for a team that was till recently ranked No 1 in the ICC Test rankings. Fletcher got time to assess the Indian players on that tour. As a modern day, high-profile coach, he would have studied videos of all the current and prospective Indian cricketers  to spot talent and chalk out strategies for the England series that followed the Caribbean tour.

Having coached the English team, it augured well for India to have the services of Fletcher on the tour of England. But England were a step or two ahead of Fletcher. They, too, were aware of his thought process. England went on to dissect the Indian batting as well as bowling with the discipline of a well-oiled machine and comprehensively outclassed them in all departments of the game.

In England, swing and seam plotted India’s downfall. And on the tour Down Under, it was bounce and pace which destroyed India. The Aussies bounced each and every Indian batsman on Day One of the First Test, and then kept the ball up from the following day. The Indian batsmen, waiting for the short stuff, were a bit too long on the back foot; they could not get on the front foot in time. The Aussies shrewdly used the short ball and got the Indians out to swing and seam. In both overseas series, the Indian batsmen failed to counter the strategy and tactics of their opponents and were caught napping. ‘Expect the unexpected’ should have been the mantra. Unfortunately, Fletcher did not prepare the team for the unexpected.

The Board of Control for Cricket in India (BCCI) should be complimented for giving Fletcher a long rope. The Indian board has prevented him from speaking to the media, and that has worked in Fletcher’s favour. Had he spoken to the Indian media, he would have found it difficult to get some of them off his back. He would have to face tough questions after the 0-8 drubbing in the two overseas series against England and Australia.

I sometimes wonder what would have happened had it been an Indian coach in place of Fletcher. The BCCI, the Indian fans and the Indian media have shown immense patience, like never before. But the volcano is on the brink of eruption. Only a series win can cool it down.

Fletcher could have opted for Indians to be his assistant coaches, batting and bowling. Their job could have been well defined: to monitor the progress and mentor young bowlers and batsmen in domestic cricket. They would have been an excellent source of feedback of the progress of the players. He could have implemented his plans through them — the task of grooming young cricketers on how to handle international cricket. But most foreign coaches have shown more faith in overseas personnel to be their assistant coaches as it works well for them to get into a comfort zone. This policy has deprived Indian coaches of international experience and exposure. They are relegated to work with First-Class teams or coach at the National Cricket Academy (NCA) and other cricket academies. Foreign coaches hardly watch domestic cricket to understand the socio-economic problem and psyche of Indian cricketers to understand them.

Fletcher has to deliver now. He can’t complain that he is not given the same power that England had entrusted him with; he was well aware of the terms and conditions when signing on the dotted line. He is one who raised the bar, with his past record, and thus the expectation of him by Indian fans is justified.

In the series ahead, he should be the first one to raise his hand and be counted. If the statements of some of the Indian cricketers are true that they have benefited from Fletcher’s inputs, it would be safe to assume that the team is in sync with the coach. The new selection committee would also like to establish their credentials and have selected the best available talent. Sandeep Patil & Co. have bravely provided their shoulders from which the coach could fire by denying the English batsmen quality spinners to face in the warm-up games before the first Test. Now it’s entirely up to Fletcher and captain MS Dhoni how effectively they utilise the resources that favour the home team.

It’s a make-or-break series for many in the Indian team. It won’t come as a surprise to see many heads roll, should things go out of hand. The Indians are as much under pressure as England, but the pressures are not the same. I hope and pray that the Indians will pull up their socks and begin a new chapter in the history of Indian cricket with an emphatic series win. Self-belief is the key. 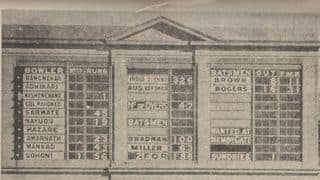