The David Hussey episode does not seem to be going off the radar. And it may get consigned to the bins only if India pull off a victory over Sri Lanka in their final game with the bonus point, and the Aussies put it across the Sri Lankans in their last game before the Commonwealth Bank (CB) Series finals. 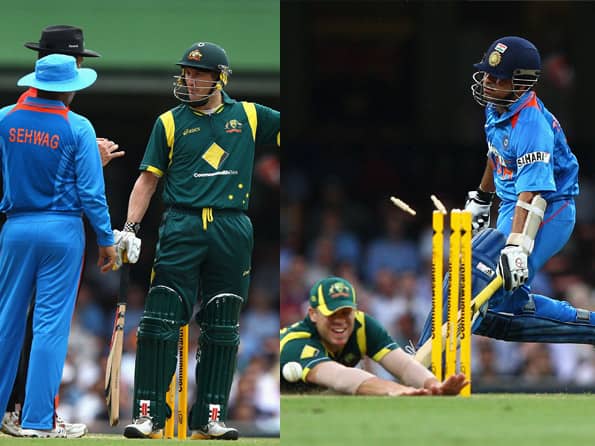 The David Hussey episode does not seem to be going off the radar. And it may get consigned to the bins only if India pull off a victory over Sri Lanka in their final game with the bonus point, and the Aussies put it across the Sri Lankans in their last game before the Commonwealth Bank (CB) Series finals.

Mahendra Singh Dhoni was emphatic that David Hussey was indeed run out. He minced no words in expressing that the David Hussey and the Sachin Tendulkar incidents went against India.

The wordings of the law, one that was debated when the match was on, and the other ‘handling the ball’ law that got into focus after the game got over, have been scrutinised over and over again, and there will not be a final word as either party, arguing in favor or against, seem to be convinced of their view point.

Had the David Hussey incident gone to a law court, Dhoni’s attorney may have argued that the moot point is how much was the arm ‘extended’ in the case of David Hussey and where it was positioned when the flight of the throw was interrupted. The attorney may well argue, “My Lord, anyone protecting himself from injury would place his palm or hand to a part that is close to where he felt the danger was — perhaps cover his face or protect his ribcage and not extend his gloved hand far enough to come in the way of the sizzling throw from one of India’s best outfielders! If you were to see the slow motion replays, My Lord, it would be very evident that David Hussey is running with his eyes on the ball and his hand is below his shoulder level when he is patting the ball down! A batsman intent on avoiding injury to his person would have swayed away from the line of the ball or ducked or did whatever in that instant, and not put his hand out to stop the ball, Your Honour!

“David Hussey is quoted in the Sydney Morning Herald as saying, “I just saw it and thought, ‘Oh no, it’s going to hit me in the head,’ and I just put my hand up to stop the ball”. The hand was never put UP, Your Honour! It was BELOW his shoulder level, and the distance between body and the interrupted ball is a foot plus. It was a malafide act, and you need to rescind the decision of the ignorant umpires and award India the wicket, and order a replay of the game from that point onwards, My Lord!”

And yes, the learned counsel will also probably argue the case of Sachin Tendulkar vs Brett Lee with the following argument:  “Learned Judge Sahib! Here is the video replay of the incident, My Lord! You can see Brett Lee bowling around the stumps to left-handed Gautam Gambhir, who pats it down for a single. And what does Brett Lee do, My Lord? He crosses the pitch when there is no possibility whatsoever for him to field the ball, and then plants himself right in the path of Tendulkar with absolute intent to impede him from reaching the crease, My Lord!  As you can see there was absolutely no intent other than blocking Tendulkar from reaching the crease!”

Whilst nothing can be done over what has happened, right or wrong, the only positive aspect of these incidents could be the learning derived, and how they can be applied to ensure that similar situations are either avoided in future or handled without any team feeling bitter, again whether with justification or not.

But will the International Cricket Council (ICC) wake up? Very unlikely.

Let us look at the fiasco at the toss during the World Cup game between India and Sri Lanka at Mumbai in April 2011. There was confusion over who had won the toss. How was it resolved?  By the suggestion of Ravi Shastri, there as a TV Presenter, and going beyond his mandate by suggesting a re-toss!

Did the ICC learn from it and include a provision in the October 2011 amendments? No! The law only speaks of a toss, and does not provide for anything in case there is some dispute or mishap during the toss.

Does the law provide for a third umpire to reverse his decision by displaying the appropriate light, to indicate either “out” or “not out”? No!

Does the law provide for how to deal with a ball bowled short in an innings? No!

Imagine what would happen if the umpire called it an over after five deliveries, in the last over of a match in a close game? Would no one convey to him that there is yet another delivery to be bowled? You can bet your last buck that there would be some communication from some quarter and the last ball will be bowled. Right? How then, can an over bowled short during the middle of an innings, be any different from the last over of the game?

It is time for the ICC to ensure that they not only plug any grey areas in the laws, but also provide for illustrative examples on how the law will be applied. Providing explanatory notes and visual aids as collateral to help understand the law and how it is to be applied to respective Boards, with the objective that it is the Board’s responsibility to educate their cricketers could be a positive step. Neither Mahendra Singh Dhoni, at the post-match press conference, nor Sunil Gavaskar, as expert on NDTV, seemed to be aware that in this tournament the net run rate will not be applied in case two teams were on level points!

Playing cricket in the spirit of the game? Let us take a hypothetical situation, ridiculous as it sounds. A batsman, unaware that one of the shoe spikes has come off, steps out to play a shot; loses foothold, slips and falls; missed the ball completely, and is stumped. Would any captain recall him to continue batting in the ‘spirit’ of the game?

The game has changed and is no longer what it was in very many aspects. As for the much- vaunted ‘spirit’, it may be best for the rival teams to get together after the game, and enjoy the ‘spirit’ that comes out of either bottles or aluminium cans! Let the game on the ground go by rules.