Over six Ranji seasons, the allrounder has made 3621 runs and taken 204 wickets in 58 matches but in that time has played for India A six times.

Since the 2012-13 Ranji Trophy season, allrounder Jalaj Saxena has scored over 300 runs each year, including 821 and 768 runs on two separate seasons – and claimed over 20 wickets every time, with returns of 45, 39 and 44 wickets underlining his potency.

Not many specialist batsmen and bowlers have managed to rake up the numbers that Saxena has during this time. He has been the highest wicket-taker in a season, has won the best allrounder award multiple times, and even took Kerala, as an outstation player, to their first ever Ranji Trophy knockouts last year.

But the 31-year-old, during the aforementioned six years, has so far turned out for India A in just four List A matches and two first-class games. He has represented the Indian Board President’s XI three times, twice this year in July and September. So when Saxena says he does not have an answer to why he has had so few opportunities, you better believe him.

“The last time I played or India A [In 2013], I took six wickets against New Zealand A – the highest. After that, I never played for India A in a one-day,” he tells CricketCountry. “I don’t know what has happened. I cannot do anything about it. I can only focus on what is in my control. I look to enjoy my cricket now and do things that are in my control.”

But the desire still burns bright.

“I always dreamt for playing for the country. I still  harbour that dream and I strongly believe that if something has to happen it will happen and I still believe I will play for the country,” he says. Is it a case of the selectors favouring a better, younger allrounder than him? Is he not better than the best? Saxena is quick to respond.

“R Ashwin is the best offspinner in the world, but many offspinners have played after him [in the Indian team],” he explains. “So I don’t think that if there is any one particular player already in the setup, I don’t have a place. I still hope I get what I deserve.”

In these past six years, Saxena played four for his home state of Madhya Pradesh before making the move to Kerala. In 2016, when he moved shifted states, Saxena had told this writer that he hoped a solid performance for a smaller team like Kerala, helping them to the knockouts, maybe leading to people recognising his performances. He finished as the highest wicket-taker last season and Kerala made the knockouts.

Yet that opportunity never came. India A toured England, played a host of matches in India last year and are set for a tour of New Zealand. Saxena’s name has not featured in any of those squads.

“Yes, I came here thinking that it is a smaller team and if I help them qualify for the knockouts, my performance will be recognised, and in theory the idea sounded right, but I have got an award for that, but the hope is I get the reward for it as well,” says Saxena, who scored 522 runs for Kerala at an average of 52.20 and picked up 44 wickets at an average of 17.11 last season.

However, another season has gone by and another one is about to start and it is back to the grind for the Indore-born cricketer. “Kerala has the potential not only to compete but qualify for the knockouts again and I have a belief that this team will do it again,” Saxena says about the Sachin Baby-led team, who are pooled in Elite Group B this season.

Personally, Saxena doesn’t set any goals and whatever he can contribute to the success of the team is the goal achieved.

“To be very honest, I don’t set goals and never have,” he says. “I take it match by match and try to do the best that I can for my team. It is a team game and my success is also my team’s success. If I am taking a wicket, there has to be another bowler who is bowling good lines and putting pressure on the batsmen at the other end. While I am batting there is a teammate running those runs for me as well. It is team game and as a unit we have to do well, click together and support each other.” 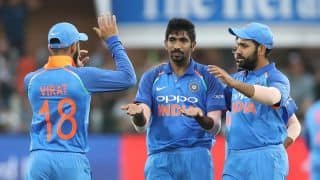