A county veteran, Ian Gould played 18 ODIs for England. Today, he is a respected umpire on the international circuit.

Ian Gould, born August 19, 1957, was a county veteran who played 18 ODIs for England. Today, he is a respected umpire on the international circuit. Nishad Pai Vaidya looks back at Gould’s cricketing journey.

An umpire can easily go unnoticed on the field of play — unless he commits an atrocious howler. However, the game has also seen a few characters in the white coat who became crowd favourites due to their actions on the field of play. Billy Bowden’s idiosyncratic movements made him more of an entertainer, whereas David Shepherd’s Nelson superstition heightened the buzz around the number 111. However, Ian Gould is one umpire who loves to share a laugh with the players and sees the lighter side of things. Sometimes, it is easy to forget that he was a player.

Born in Buckinghamshire, England, Gould’s first experience at the representative level came at the age of 13, when he turned up for the Buckinghamshire Young Amateurs against the Hertfordshire Colts in the Hilda Overy Trophy 1971. In his maiden outing, he scored 47 while opening the batting. In his next game, six days later, he scored 75. At that young age, his talent was recognized and a year down the line, he made his second XI debut for Kent, which wasn’t a very happy outing.

Gould continued to play for Buckinghamshire Young Amateurs until he was called up to the Middlesex Second XI in 1974. Consistent performances there won him a First-Class debut for the senior side in the County Championship in 1975 against Nottinghamshire. He walked into a Middlesex dressing room that featured the likes of Mike Brearley, Mike Gatting, Phil Edmonds and Mike Selvey. In Gould’s first season, he played only three List A and three First-Class matches. With John Murray handling the gloves for a major part of the season, Gould’s chances were limited.

During the 1976 season, he was away for some time in the Caribbean playing for the England Young Cricketers. On that tour, he played alongside Gatting, David Gower, Paul Allott, Bill Athey and Chris Cowdrey. It was only in 1977 that Gould became a fixture in the Middlesex. In 1978, he recorded his first hundred in First-Class cricket when his innings of 128 rescued Middlesex from dire straits against Worcestershire. Middlesex were reduced to 57 for 5 when Gould walked in to take on an attack spearheaded by Vanburn Holder. From there on, he lifted Middlesex and took them to 314 — which allowed them an 80-run lead. During that season, he also recorded 55 dismissals with the gloves.

Gould also travelled to New Zealand in 1980 to play for Auckland — not a very successful stint. Interestingly, he also played for an International XI that toured Pakistan in 1981. The side featured Michael Holding, Eddie Hemmings, Colis King and Rohan Kanhai. The 1981 and 1982 seasons were very prolific for Gould behind the stumps and that helped him earn a call-up into the England side for their tours to Australia and New Zealand as an understudy to Bob Taylor. During the latter season, he switched counties and moved to Sussex — a move that instantly worked wonders.

At the Ashes Down Under, Gould did not get an opportunity to don the Test cap, but he did have his moment in the sun. The dramatic fourth Test at Melbourne is remembered for the way England stole the game by 3 runs after a spirited last-wicket stand between Allan Border and Jeff Thomson. Chasing 292, Norman Cowans had severely dented the hosts with a six-for. One of those wickets should be credited to Gould as he took a magnificent low catch to dismiss Greg Chappell, the Australian skipper, for only two runs.

Gould finally made his international debut during the Benson & Hedges World Series that followed the Ashes. In his maiden outing, which was against New Zealand, he opened the batting and scored 15. It was an encounter dominated by Gower as his brilliant 158 off only 115 balls masterminded an England victory.

Gould also went on to feature in ODIs during the New Zealand tour and the 1983 World Cup — which was his last international assignment. Although he did not perform too well with the bat, there was one notable innings during his 18-game ODI career. Against Australia at Sydney, his quick innings of 42 gave England impetus towards the end in a rain reduced match — an encounter the visitors clichéd by 98 runs.

Post his international days, he continued to play for Sussex and his batting performances did improve in the years ahead. In 1985, in a County Championship match against Leicestershire, Sussex were in deep trouble while chasing 288 in the fourth innings when they were reduced to 65 for 4. Gould took control and scored 101 to lay the foundation for a narrow two-wicket victory. Then, in 1986, he captained them to victory in the domestic one-day tournament — the National Westminster Bank Trophy.

Gould continued to play for Sussex until the completion of the 1990 season. He then returned to his original club, Middlesex, albeit in a different capacity. He continued to turn up for their second XI until the dawn of the new millennium.

Following his cricketing career, Gould switched to umpiring and made good progress. He first made it into England’s First-Class panel in 2002. In 2006, he was elevated to ICC’s international panel and officiated in his first ODI in June — which was between England and Sri Lanka at the Oval. Two years later, he made his Test debut at Bloemfontein when South Africa took on Bangladesh. In 2009, he was inducted into the Elite Panel of Umpires.

Away from cricket, Gould has a keen interest in football and was a goalkeeper in his early days — representing Slough Town and Arsenal. That also allowed him to become the chairman of Burnham Football Club in 2009. A character of sorts, he has his own ways of getting things going. To count the balls in an over, he has six Bahraini Dinars on him.

Speaking about umpiring and possible errors, he told Gulf News, “Giving Sachin Tendulkar out for 99 in a one-day match at Bristol was a mistake. Matt Prior took the catch off Andrew Flintoff’s bouncer and I felt it flicked the glove, although replays showed it hit the arm guard. You would love to get every single decision right, but that doesn’t always happen so you just have to forget about any mistake you may make and concentrate on getting the next one right.”

The cricket world certainly needs likeable men like him on the field of play. 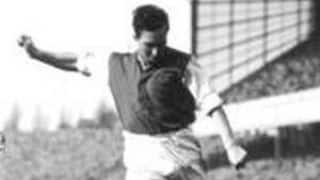 Ashes 1953: England clinch ‘The Test to win all Tests’ to end two decades of sorrow