England played arguably its poorest game in the last couple of years and sadly for us home fans, it meant there was really only one team in it.

As I said in my last column, you never know what Pakistan side you re going to get and yesterday in Cardiff to the cost of England we saw the very, very best of it. Add to that, England played arguably its poorest game in the last couple of years and sadly for us home fans, it meant there was really only one team in it. Make no bones about it, Pakistan was fantastic. From the first over, where they were hugely unlucky not to get an early wicket, it controlled the match and deservedly won the game by some margin. The aggression of its bowlers was really impressive, and our batsmen struggled against Pakistan s pace and variation. Full cricket scorecard: England vs Pakistan, ICC Champions Trophy 2017, Semi-Final 1 at Cardiff

The bowlers hit the pitch hard, but also mixed it up with an array of slower balls at the right times. Combined with England s apparent issues with the pitch, Pakistan didn t give them a sniff. For Ben Stokes, of all people, not to hit a boundary in 64 balls, and only get 34 runs in total, shows just how impressive the Pakistan bowling attack was. We didn t hit one six yesterday, despite hitting 23 in our group games. Pakistan kept England well and truly where they wanted them to be. In many ways, Pakistan gave England a lesson in tournament cricket. Unlike the home side, which saved its worst performance for the knockout rounds, Pakistan got its out of the way early in its defeat to India.

Ironically, it could be India against Pakistan in the final and it ll give them the chance to avenge that earlier defeat. And if it performs how it did yesterday, you wouldn t bet against it. But amidst all the disappointment in England s performance and rather unexpected premature competition exit, we shouldn t lose sight of how far this team has come and the potential it holds. CT 2017, PAK vs ENG, Semi-Final 1: Hasan s eventful 3-35 and other highlights

It ll be more gutted than anyone that it didn t go on and win the competition, as like many of us, it really believed it was a contender, but this might be the catalyst it needs to go on and win the World Cup in a couple of years time. Our white ball sides have had a couple of close calls in recent times, what with this and last year s World Twent20 final loss, so the key is taking the experience gained and ensuring we don t make the same mistakes next time around. That s what the great sides do, and this England side has the potential to be a great side, no doubt about it.

It s a really good time for English one-day cricket and I m excited to see what the next couple of years has in store. For instance, we ll see players like Joe Root and Ben Stokes get even better, if you can believe it, and other players come into the reckoning. Someone like Jason Roy, who obviously didn t have the best tournament in the world, will undoubtedly come back into form and hopefully, establish himself as one of the most exciting and explosive players in the world. ICC CT 2017: England is not where it wants to be just yet

We also shouldn t forget how important an absence of Chris Woakes was. That s not to criticise our other bowlers, I hasten to add. I was really impressed with the England bowling attack throughout the competition, but when you lose a guy of Woaksey s quality, it s always going to negatively affect you. Not just with the ball either, as he s a fine batsman too.

Sometimes in sport, you have to concede it simply wasn t your day and for England, sadly that s just what happened yesterday. As for Pakistan, Sunday is going to be massive. The atmosphere at The Oval is going to be sensational and whoever their opposition, it s going to be a wonderful occasion. 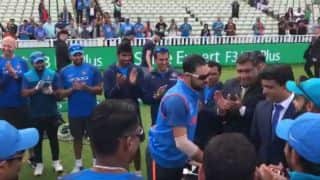