"Sri Lanka is a potential banana skin for any side, with the energy and skill its side has, and it was noticeable that the track wasn t coming on as well as players have come to expect at the Oval," says Graeme Smith

After what was a convincing win against the Sri Lankans, it s hard to find fault in what was a very professional performance from the South Africans.

Sri Lanka is a potential banana skin for any side, with the energy and skill its side has, and it was noticeable that the track wasn t coming on as well as players have come to expect at the Oval.

AB De Villiers will be thrilled with the overall performance, and from my point of view it was pleasing to see a selection which was based around aggressive, wicket taking bowlers. South Africa would have been desperate to bat first, and although I felt it could have pushed on towards 330, you ll win more games than you lose once you ve put 300 on the board.

Being tested early in the tournament is great for the guys in terms of gelling together, and Sri Lanka certainly didn t make batting easy for the South Africans. Amla and De Kock were forced to work hard in the first 10 overs or so, but Hashim showed his class in what proved to be the glue to the South African innings.

Even in the modern era where we re used to players going hard from the first over of the game, there is still so much to be said for players who enable others to play around them and bat deep in to an innings. Hash can score freely as well, of course, but his strength is batting long and playing match winning knocks. FULL CRICKET SCORECARD: Sri Lanka vs South Africa, ICC Champions Trophy 2017 Match 3 at The Oval

Another man I was pleased to see get some runs was Faf Du Plessis. For me, Faf is the key cog in the South African batting line up. The way he goes about his game with such intent gives the innings momentum, and I thought he batted beautifully in game one. Both he and Hash did well to assess the conditions, in that upping the rate on that surface wasn t particularly easy. What Faf did fantastically was to take scoring pressure of Hashim and just allow him to bat.

I just can t fault Hashim. His preparation, temperament and sheer appetite for runs are what has allowed him to race to 25 ODI hundreds as quickly as he has. Having your batsmen hit form early in a tournament is always key to winning tough games, so to see them go about their work with so much conviction was exciting for the remainder of the tournament.

If I m being hypercritical, which is tough when South Africa put 299 on the board, I didn t think its reading of key moments during the innings was as clinical as it could have been. There were points in the game at which South Africa could have looked to really heap pressure on Sri Lanka.

When both Faf and Hashim were well set, and facing the spin of Gunaratne for instance, I was looking to one or both players to take the attack to him. Those key periods are what can turn 300 in to 330 plus, and that may make the difference against some of the stronger batting line ups.

When it was our turn to bowl, I was pleased to see how aggressive the South African bowlers were. As a unit, they created pressure brilliantly and other than Niroshan Dickwella at the top of the innings, I didn t see how any of the other batters unshackle themselves to go on to challenge South Africa s total.

I ve spoken a lot about how key Imran Tahir is for South Africa, and I d go as far to say that Imran is our greatest asset in ODI cricket. He s performed so consistently, and is undoubtedly now the best short form spinner in the world. Against Sri Lanka, he bowled skillfully to both right and left handers and he bowls so few bad balls. For AB, that means he can often afford an extra fielder in the inner circle, enabling the team to create more pressure by preventing singles.

It appears to be a theme both in this tournament and in world cricket generally, however, that captains are becoming increasingly wary of picking their spinners for one day cricket. We saw Eoin Morgan choose to leave Adil Rashid out of the side, having played him for a long period of time. Steve Smith also seems reluctant to pick Adam Zampa, and I think there s an issue with captain s understanding of how to allow spinners to play an important role and bring them in to the one day game.

It s clear to me that South Africa has worked on specific plans as a bowling unit. That requires both intelligent and brave leadership, as well as the bowlers to execute those plans. New Zealand really impressed me in terms of how it went about bowling to the likes of Finch and Warner in its washed out game. Bowlers need courage in a game where often it can feel as though everything is in the batsmen s favour.

All in all, I m looking forward to this week s game against Pakistan after what was a thoroughly convincing performance against Sri Lanka. 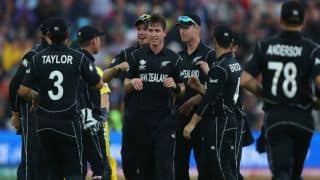 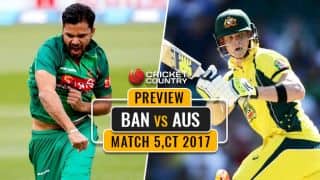