ICC Champions Trophy 2017: Bangladesh bowed out of the marquee event after a crushing defeat against India at Edgbaston on Thursday.

It was always obvious that for Bangladesh to make it to the final, it had to do something stunning, something special against India. It had the opportunity to do so, but it didn t grab that opportunity, and in a match like the semi-final of an ICC event, that can be decisive.

After losing two quick wickets, Bangladesh came storming back into the contest through a brilliant third-wicket partnership between Tamim Iqbal and Mushfiqur Rahim. That stand, based on commonsense batting and excellent stroke-play, had set the tone for a total in excess of 300, but that wasn t to be. You could say that given the way India batted and the way Bangladesh bowled, even that total may not have been enough, but no matter the conditions, when you post 300-plus on the board in a knockout game, there is always a chance of pulling off victory.

That s why the missed opportunity will hurt Bangladesh. In a game such as a semi-final, these mistakes are very difficult to rectify and clearly, 265 was not a big enough target on a flat pitch where there was no joy for the bowlers. You simply can t expect to win a semi-final on a good batting surface with just 264 on the board.

I thought the bowling too was pretty average. Bangladesh didn t bowl well at all, we did not bowl enough wicket-taking balls. Shikhar Dhawan and Rohit Sharma batted superbly during their opening partnership, the openers just took the game away from us and I suspect we just gave it up after that first salvo. At least, that s what the body language of the Bangladesh boys suggested.

Virat Kohli proved once again just how good a player he is, and especially in a run-chase. Had Bangladesh got another quick wicket after dismissing Dhawan, it could have tried to push India into a corner, but Virat simply shut the door in its face with calmness and authority. From that point on, it was always a case of when rather than whether and, in the end, it was a sad story because Bangladesh had come within one step of the final for the first time ever, but found that step too steep to negotiate.

I think the pressure of the big game played on the minds of the Bangladesh players. India s biggest advantage is that it has been here before, and it knows how to handle this pressure. It knows how to perform in these kinds of situation. By contrast, because it was the first time at this stage of a major tournament for Bangladesh, it was fairly obvious that it could not handle the pressure of the stage, of the occasion.

When you reach the final stages of a tournament, what matters is how well you can absorb the pressure and respond to situations. Bangladesh s strongest suit is its middle-order batting, but it just collapsed, which is unusual. Shakib Al Hasan, Mahmudullah and Mossadek Hossain are all genuine, proven performers but they frittered away a great platform.

At Edgbaston, after the first five overs, the surface rolled out into a batting beauty. There was simply nothing in it for the bowlers, and even a very good India bowling side had no answers on how to staunch the flow of runs.

In that situation, giving away two wickets to Kedar Jadhav, a part-time off-spinner at best, was almost unpardonable. If Bangladesh had made the most of Jadhav s overs and treated him in the manner in which it should have, then it could have easily got to 320. Like I said before, that doesn t guarantee anything against this quality Indian batting line-up, but who knows what might have happened? Bangladesh succumbed to the pressure it put on itself, but it is of course not all gloom and doom.

The next time it is in such a situation, Bangladesh will know how to handle it better. It can take a lot of positives from the ICC Champions Trophy 2017. It had a few good days, a few good games, and it made an historic first entry into a global semi-final. The players showed that they are capable of holding their own in big matches, in big tournaments. In so many ways, this was a very good rehearsal for the ICC Cricket World Cup 2019. Bangladesh can take plenty of lessons from this tournament, and use them to prepare itself better for the big one in two years time, also in England and Wales. It will have a better idea of what to do in these conditions and in a big tournament, priceless learnings for a young and developing team.

The stage is now set for a rip-roaring if unexpected finale to the tournament. When we were young lads growing up, we heard a lot of stories about India-Pakistan matches, there was so much romanticism attached to it.

In my view, an India-Pakistan final in a big tournament is like Brazil and Argentina battling it out in football s World Cup final. Television viewership will go off the charts, that s for sure.

I firmly believe India is far ahead of Pakistan. Up to some ten years back, the two teams were fairly evenly matched but India has marched ahead since while Pakistan is not the same team as it was earlier. India has experienced batsmen, proven match-winners and good bowlers. I would give India a 70-30 chance to win the final, but no team uses its 30 percent winning chance better than Pakistan, so I would not like to hazard a guess about the outcome.

Finals of big tournaments have tended to be lop-sided; I am just hoping we have a well contested last game to round off what has been an excellent competition. 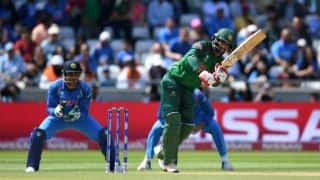