England had to beat Australia to make sure of their place in the Super Sixes. With 12 overs to go in the match, they looked likely to pull it off with plenty to spare. But Andy Bichel, who had ripped through the English batting, proved to be a thorn in the Pommie flesh with the bat as well.

March 2, 2003. England had to win it to make sure of their place in the Super Sixes. And with 12 overs to go in the match, they looked likely to pull it off with plenty to spare. But Andy Bichel, who had ripped through the English batting, proved to be a thorn in the Pommie flesh with the bat as well. Arunabha Sengupta looks back at the incredible Australian win at Port Elizabeth.

What constitutes a great, great side?

A pool of champion batsmen, fantastic wicketkeeper who is also one of the greatest with the bat, a mix of supreme pace bowlers and an all-time great spinner?

Australia under Ricky Ponting during the first few years of this century had all that; and then some more. They had fringe players who brimmed and bristled with talent, who could burst onto the scene as the anticipated weak link and produce performances that could leave the world short of words and breath.

Andy Bichel managed just 19 Tests and 67 ODIs with commendable results, but was not really in the same league as some of the others in the side. He was a useful enough member of the squad, who carried drinks and ran out with messages with the air of cheerful bonhomie, and when asked to don the baggy green cap did so with a lot of gumption and gusto. Yet, he was deemed to remain one of the lesser members of the great Australian side.

But for some days when the gods of cricket touched the second string, and right on cue Bichel would run in and resonate, producing performances fit for the grandest of stages.

As he did on that afternoon at Port Elizabeth, first with the ball, his weapon of choice, pitching it immaculately on that slow turf and then with the willow, with which he was always handy, scooping his side out of doldrums tottering near capitulation.

The haul of seven

England needed to win to make sure of their place in the Super Sixes, and started in a manner that promised much.

Marcus Trescothick, so far in horrid nick in the tournament, struck the ball well and often, taking full advantage of a surprisingly wayward Glenn McGrath. Nick Knight, another strokeful left-handed opener, was fluent in his approach. Brett Lee was expensive as well, Trescothick pulling him over long leg for six. The partnership galloped to 50 in 45 balls, and stood at an imposing 66 without loss after nine overs when Bichel was given the ball.

And then things changed drastically. Off the fifth Bichel delivery, Knight tried to steer fine and was caught by Damien Martyn in the lone, wide slip.

Off the first ball of his next over, Bichel induced a thin edge off Michael Vaughan. And five balls later, Nasser Hussain got a ripper of an out-swinger that pegged back his off stump.

Two balls later, McGrath had Trescothick edging, to the wide slip once again. It was to be the only England wicket not taken by Bichel that day. England were suddenly on 74 for 4, and the situation was back to the familiar tale of humiliation that had started in the late 1980s.

Five struggling overs followed, during which Paul Collingwood tried to hit his way out of trouble by slogging Brad Hogg for six. It did come off, but he tried the same strategy against Bichel, slashing hard at a rather ordinary delivery. Bichel was on a wave when performance and fortune were combining in bumper returns, and the thick edge was taken by Adam Gilchrist behind the stumps. 87 for 5. England were sliding towards a disaster.

Alec Stewart and Andrew Flintoff steadied the innings with some sensible batting. Bichel was played with caution and care, and was rested with figures of 6-0-12-4. The other bowlers were milked for runs. Hogg and Darren Lehmann were nudged around, and Flintoff lofted Andy Symonds for a four and a six.

When on the stroke of the 40th over Stewart struck a boundary off Lehmann and both batsmen stood in their forties, the reconstruction had been effected almost to perfection. It was signal for Bichel to be brought back. He was and struck in his second over. Flintoff aimed for the stands behind square leg, the ball spiralled up and landed safely in the gloves of Gilchrist. An over was bowled with Lehmann sending down his left-arm spin to brother-in-law Craig White. And then Bichel sent one down straight which Stewart played across the line and was the stumps were rattled.

The Queenslander started his last over with figures reading six for 18, and the first ball was driven by Ashley Giles into the air. Michael Bevan timed his jump to perfection at mid-off. Bichel had seven. But, neither was it the end of his magical match, nor was it to be the last time he and Bevan would combine. He ended his spell with figures of 10-0-20-7. A splendid exhibition of accurate bowling, pitching it straight and up, while getting enough movement to trouble every batsman. It would have been the best ever World Cup bowling figures, but for the previous match in which McGrath had taken seven for 15 against the hapless Namibians.

And then with the bat

England ended their essay at 205 for 8. And when Gilchrist pummelled James Anderson for three fours in the second over, it had all the signs of a cakewalk.

Andy Caddick, however, had other ideas. He went a long way in replicating Bichel’s efforts for Australia. His bouncer grew big on Matthew Hayden and the pull was taken at mid-on by Giles. Gilchrist responded with another couple of boundaries, but then Caddick pitched short again and the southpaw’s slash went high to third man where Vaughan juggled with the ball and held it.

Three balls later, Martyn shuffled across, was hit high on the front pad and was given leg before. The batsman was hardly amused, but the Englishmen and their plenty of fans in the stadium were positively delighted. They were winning.

Ponting struck Anderson for a boundary, and played a maiden off Caddick. In his fifth over, Caddick pitched short and Ponting swivelled to pull him out of the ground. Something urged Caddick to repeat the same delivery, and Ponting repeated his stroke. However, Giles at long leg hardly had to move before throwing it up. It was the ninth over and Australia were 48 for 4. Caddick’s figures read 5-2-19-4.

Lehmann and Michael Bevan, left-handers both, went through a period of consolidation, sedate, secure, pushing the ball into gaps. Flintoff and White sent down probing and tidy fast medium, Giles provided the spin with a couple of overs from Vaughan. The two men put on 63 from 20 overs against some accurate bowling. And then White, asking difficult questions all the time, accounted for his brother-in-law by inducing a fatal snick. 111 for five in the 30th over.

A run later new batsman Symonds drove Giles hard and the bowler held a low catch on his follow-through. The big all-rounder walked back for a duck. In the very next Giles over, Hogg went for a cut and was taken by Stewart behind the wicket. 114 for 7.

With Brett Lee joining him, Bevan responded slogged Giles out of the ground, timing it to perfection. The two batted for a while with composure and common sense before White sent in a searing throw to catch Lee short of the ground.

135 for 8 in 37.4 overs, 71 to win from 74 balls, two wickets in hand. Andy Bichel, wondering whether all his stupendous work would come to nothing, joined Bevan in the middle. Only Glenn McGrath sat padded-up in the pavilion.

One of the greatest finishers of all time, Bevan was not prone to lose his cool. And Bichel was blessed with Midas touch for a day. As if to prove it, he creamed Anderson for a boundary. And Bevan picked fours off Anderson and Giles.

The singles were run with precise placements, and an over each by Flintoff and Caddick resulted in a boundary apiece. They were gaining on the target, while the overs were slowly running out. The match could not get any closer.

With 17 runs required off the last three, Giles sent down six tight deliveries. Only three were managed off the over. Australia were 191 for 8, 14 to win off the final two.

One perhaps has to back such hunches. Only, they are very prone to go wrong very often.

Bevan managed a single off the first delivery. The second was a slower. Bichel reached out bending his knee, swung his bat and dispatched it over the scoreboard at mid-wicket. Hussain’s disbelieving eyes followed the ball and looked vacantly at nothing in particular, wondering about the fickleness of fate.

Anderson ran in again, pitched almost on the block-hole. Bichel’s left foot was planted towards the leg, the bat came down, the ball went not too far from Caddick at mid-on, but fast enough to beat the paceman. And it gained pace all the way to the boundary. The last two balls had changed the equation to 3 required off 9 balls. The next ball brought a single and the following two nothing. But the damage had been done, and the destroyer with the bat had also been Andy Bichel.

It was Flintoff who ran in to send down the final over with two runs needed. Bichel stood in front of him, having won everything during the day.

The first ball was dead on target, and a tense dot was registered. Bichel drove the second hard, but Flintoff stooped down and his hand checked the ball. Another dot. Was there going to be some final twist in this already fascinating tale?

And Flintoff ran in again and Bichel played to mid-on, the ball travelling in leisurely pace, straight to Vaughan at mid-on. And in some incredible manner it went through his legs for a run.

The bowler stood with hands on his waist. Bevan had the strike. The scores were tied. The field was brought in. Hussain, looking dazed, jaded, waited for fate’s final strike. Bevan provided it, hitting through the on-side for four. And the two batsmen ran off, ecstatic with elation. They had put on 73 in 12 overs. It was Australia’s record 12th win in succession.

Neither Hussain nor Stewart would play for England again. Bichel’s bravado had perhaps been the last straw for these two noble knights, hailing from a generation of Australian dominance over their eternal rivals.

Man of the Match: Andy Bichel. 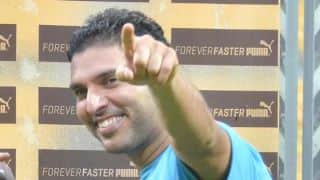 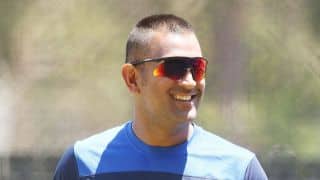