India put up an exceptional team performance to clinch the title in the 2011 World Cup.

The Australian juggernaut finally came to an end in ICC World Cup 2011 when Pakistan defeated them by four wickets at Premadasa. They were also beaten by India in the quarter-final: it was the first time since 1992 that they did not reach the top two, or even the top four, while India and Sri Lanka, runners-up in the previous two editions, thrived in familiar conditions.

As Australia plummeted for the first time in two decades, the others made hay: led by Yuvraj Singh (362 runs at 90.50, batting strike rate 86.2, one hundred, four fifties, 15 wickets at 25.13, economy rate 5.03, one five-wicket haul), India put up an exceptional team performance to clinch the title; Sachin Tendulkar, Virender Sehwag, and Virat Kohli all scored hundreds, Zaheer Khan topped the wickets chart, and the rest of the team chipped in with crucial contributions.

Openers were on a roll throughout the tournament: Dilshan and Tharanga put up two double-hundred partnerships (one of which resulted in a ten-wicket victory), while New Zealand won by ten wickets twice and Pakistan once. The Sri Lankan and Pakistani wins both came in quarter-finals. On the other hand, several pacers (Zaheer Khan, Dale Steyn, Tim Southee, Kemar Roach, Malinga, and Kyle Mills, to give a few examples) found help on subcontinent wickets that were expected to assist only spinners.

Dilshan was the only batsman in the tournament to make it to the 500-run mark (he scored exactly 500, which was 18 more than Tendulkar’s tally and 35 more than Sangakkara’s). A surprise entry was Jonathan Trott’s: he finished fourth on the list with a tall of five fifties from seven innings.

Despite Yuvraj’s phenomenal numbers, Sangakkara led the averages tally with 465 runs at 93. As expected, when One-Day International (ODI) numbers are considered, you cannot leave AB de Villiers out of the equation, while Asad Shafiq made an appearance to remind what he is capable.

Kieron Pollard biffed his way to a strike rate of 150, scoring 180 off a mere 120 balls in the tournament. O’Brien and Stirling made it to the top three as well, while the usual suspects, Sehwag and de Villiers, complete the top five.

ICC cricket World Cup 2011 witnessed a whopping 24 hundreds, still a record for any ODI tournament. Tendulkar scored two of these, taking his World Cup tally to a record six; the others with hundreds each were Jayawardene, ten Doeschate, de Villiers, Dilshan, and Tharanga (do note the Lankan dominance).

Though the pacers met their presences felt, the wickets list was dominated by spinners. Zaheer and Shahid Afridi topped the list with 21 apiece, but the surprise entry had to be Robin Peterson’s: with 15 wickets at 16 apiece, he topped a South African attack that consisting of Steyn, Morne Morkel, and one of the surprises of the tournament — Imran Tahir.

Though Peterson got a wicket more, Tahir, with 14 wickets at 11, had the best average, with Afridi (21 at 13) hot on his heels. Roach, equipped with a hat-trick, found himself up the list as well, and though South Africa did not make it to the semi-finals, Peterson and Steyn made the cut.

The top four names on the strike rates table is the same as on the averages table, while Malinga replaces Steyn as fifth.

None of the most economic bowlers of the tournament — Ajantha Mendis, Ray Price, Mohammad Hafeez, or Saeed Ajmal (sigh) — managed a lot of wickets, but all of them did excellent jobs, conceding less than 3.60 an over on absolute featherbeds. The Afridi-Ajmal-Hafeez trio was better than it met the eye, but it went in vain.

There were nine five-wicket hauls in ICC World Cup 2011, which was the second-best in World Cup history after 2003 (when there were 12 spells). Afridi became the fourth bowler (after Gary Gilmour in 1975, Ashantha de Mel in 1983, and Vasbert Drakes in 2003) and the first spinner to take two five-wicket hauls in the same edition of World Cup cricket. Surprisingly, four of these nine have come against India.

Roach was the first to take a hat-trick in ICC World Cup 2011, following which Malinga was at it again. Malinga became the first bowler to register two World Cup hat-tricks. He almost did another four-in-four, but Elijah Otieno played out the next ball; he got his four-in-five, though. The corresponding spells of Roach (six for 27) and Malinga (six for 38) were also the best in the tournament.

Following Adam Gilchrist’s retirement, the wicketkeeper’s table had a new leader: Sangakkara had 14 dismissals, though Brad Haddin topped the catches tally with 13. Sangakkara also led the stumpings list with four, a feat he shared with Kamran Akmal.

If Sangakkara is there, can Mahela be far behind? Jayawardene’s eight catches were a record in the tournament, two clear of anyone else’s aggregate.

As mentioned, Dilshan and Tharanga put up two double-hundred stands. Though the 231-run unbroken stand against England resulted in a ten-wicket victory in the quarter-final, they had earlier added 282 against Zimbabwe; it remained the tournament record for any wicket. The tenth-wicket record was shared between two pairs, one of which was Nehemiah Odhiambo and James Ngoche: they are brothers.

Once again India registered the highest score of the tournament, 370 for four against Bangladesh at Mirpur in the opening match. The fourth- and fifth-highest scores came in the same match, when England and India piled up 338 each in the tie at Chinnaswamy.

While Mirpur saw the highest score of the tournament, it also witnessed the lowest and third-lowest, both by the home team. Bangladesh were bowled out for 58 by West Indies and for 78 by South Africa. Kenya found themselves sandwiched in between, being skittled out for New Zealand at Chepauk for 69. 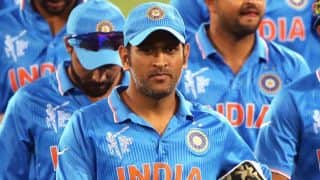