The ICC T20 World Cup 2014 has seen some batsmen’s reputation cut to ribbons and some coming of age, and Ahmed Shehzad belongs to the latter after a whirlwind unbeaten 111 against Bangladesh, becoming Pakistan’s first T20 centurion.

It is not that it stood apart from any of the other T20 hundreds scored so far but Shehzad’s innings possessed all the attributes that you want from your top order batsmen— courage, determination, a wide array of strokes with a single-minded will to stay there and finish the job that he started. His excellent strike rate is another valuable weapon in his arsenal.

Shehzad has been a stroke maker all his life, right from his Under-19 days when he was penciled to do great things or the kind of fearless rage of shots that was on display, despite being one of the younger member of the Pakistan set-up and an attitude that that oozes a will to win get on top of a bowling attack.

Being drafted into the national team at a tender age of 17 with the team still looking for personnel and big shoes to fill after retirements, match-fixing scandals and horrific terror attack that banned Pakistan from hosting any matches at home, Shehzad was seen as a player with the right kind of technique and mentality to take the team forward in to the next decade.

In the recent past, however, the promise and range of shorts took a backseat and it was the inability to post big scores that took center stage and the knives were out. It came as no surprise that Shehzad successfully turned a corner and got the monkey off his back with the blistering ton — he went on to dedicate the knock to his critics that have been hounding the 22-year-old.

The signs of correcting the minor glitches in the dashing right-hander’s armour were witnessed in the One-day International series (ODI) in Dubai against Sri Lanka. A stellar hundred that put his team on course for a series win and yet another pulsating knock against Bangladesh in the Asia Cup 2014 showed signs of greater consistency and application at the crease.

His strike rate has constantly been on the ascendency and once Shehzad gets his eye in, there are shots that he produces, especially square of the wicket which his special zone that produces lots of runs. For all the Virat Kohli comparisons that is coming in the way of the Lahore batsman, aggression and the adrenaline rush of a battle is a hallmark too. It’s noteworthy that that the opener has scored ODI centuries in South Africa, West Indies and New Zealand as well. .

In this World T20, Shehzad’s reputation has grown further and with Pakistan’s middle-order shedding their ‘brittle’ tag recently to pacing their innings with designated roles for each of them. Umar Akmal and Mohammad Hafeez to build and stay till the last overs, and senior players Shoaib Malik and Shahid Afridi to use the long handle and clear the ropes in the last overs of the innings. A lot is expected from Shehzad at the top of the order.

This sort of calculated block-by-block forethought from the team management has already resulted in posting two huge scores that set Pakistan up for victory. Led by the wizard Saeed Ajmal and the wise calm head of Zulfiqar Babar, Pakistan tied down the Australians despite the carnage from Glenn Maxwell in the middle overs. With an all or nothing game against West Indies coming up, there will be a lot riding on Shehzad to give Pakistan a bright start against the likes of Krishmar Santokie and Sunil Narine.
ICC World T20 2014 Points Table and Team Standings 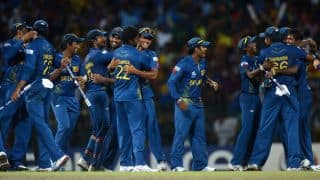