Kumar Sangakkara and Mahela Jayawardene share 26,811 limited-overs international runs, 35 hundreds and 172 half-centuries between each other, but, frustratingly, zero ICC-event trophies. Can they put one over the fence this time? Karthik Parimal writes.

The following snippet of statistics may not necessarily boggle your mind, but it certainly will elicit a sense of admiration for the Sri Lankan team: they’ve qualified for the semi-final of an International Cricket Council (ICC) tournament 11 times thus far, and have surged to the final of the ICC World Twenty20 (T20) on three counts. In the Holy Grail of events — the 50-over World Cup — they clawed for championship on the last couple of occasions, only to be mauled by the better team on the night of the finale. Their cabinet boasts of only one coveted, glistening trophy, wrested almost two decades ago by the wizardly willows of Arjuna Ranatunga and Aravinda de Silva, amongst others.

In the ‘others’ were absent two 19-year-olds who, at the time, were boisterous at the penultimate level. The right-handed Mahela Jayawardene donned the flannels for Sinhalese Sports Club, all the time plundering runs at a rate that propelled him to a stage within touching distance of the top brass. The southpaw, despite his embryonic technique, instilled a healthy dose of amazement every time he unfurled a cover-drive for the Nondescripts Cricket Club. Kumar Sangakkara, adept at scoring in domestic tourneys, was shortly promoted to Sri Lanka’s ‘A’ team that toured South Africa in 1998–99. An unbeaten 156 against Zimbabwe’s ‘A’ team during a One-Day match provided the selectors the reassurance they were looking for.

In due course of time, Sangakkara and Jayawardene became household names, individually and as one of the best sporting pairs, not just in the island nation. While their predecessors certainly put Sri Lanka on the cricketing map, this duo was touted to not just take over the mantle, but steer the side to a greater realm. In their first major ICC tournament together, the 2002 Champions Trophy, Sri Lanka breezed into the final, held at home, against India, but rain intervened and the trophy belonged to none. It was appropriate, one felt, that there was no one winner. “It was a disappointing, if fair result, with the two teams most adept on slow, turning pitches sharing the $300,000 prize,” noted Wisden.

It was the first of many forgettable finals Sangakkara and Jayawardene would feature in, although rain never played a part in any of the rest, rendering the outcome more poignant each time. Between each other, the two share 26,811 limited-overs international runs, 35 hundreds and 172 half-centuries, but, frustratingly, zero ICC-event trophies. While the latter doesn’t gloss the rich legacy they’re undeniably going to leave behind, it could well be a potential source of regret after they bid adieu to all forms of the game.

Which is why the final of the ICC World T20 2014 becomes significant, as Sri Lanka — in the final yet again — will be hoping they put at least this one over the fence, for two of their most revered players. Sure, the ICC World Cup 2015 Down Under is yet to arrive, but it’d take a gallant man to put his money on a team from subcontinent riding this far into the tournament in unfamiliar confines.

It was a hailstorm that prevented Sri Lanka from winning their first title with Sangakkara and Jayawardene in the squad, and it’s a hailstorm this time around that has ensured their safe transit into the finale of the ICC World T20 2014. One would argue Sri Lanka’s victory was inevitable, given the West Indies required an improbable 81 to win off 37 balls, but has this format ever bordered along realistic lines? It was West Indies who thwacked 82 off the last 30 deliveries against Pakistan in their previous fixture; who’s to say they couldn’t have replicated the same with seven extra balls and one less run needed this time? Perhaps, like us, the gods up their want to see the most gifted pairs of hand clasp the trophy this year. “Today, there were two gentlemen [Sangakkara and Jayawardene] who gave a lot not only to Sri Lankan cricket but to cricket as a whole. May be the Almighty wants them to win a World Cup and leave on a high. Probably, God wants them to win a World Cup and that`s why He put his hand in this so that they get another match,” Darren Sammy, too, sportingly stated at the post-match conference.

Sangakkara and Jayawardene are seldom mentioned in the same breath as India’s Sachin Tendulkar, and one would say rightly so, for very few can emulate the deeds of the latter and deserve to feature on the same cricketing podium as him. But it will not take a considerable stretching of that bracket to fit the two in. Going by the literal definition of “World Cup”, this was the duo’s sixth appearance in one: the same count on which Tendulkar finally managed to lay his hands on the gold. They have been of invaluable service to Sri Lankan cricket, but it’s a win in a World Cup — T20 or 50-over notwithstanding — that inspires young blood back home to take up the sport, more often than not. Sangakkara and Jayawardene have always been the bridesmaids, never the bride. Can they don the crown at least this time? By all means, they deserve to. 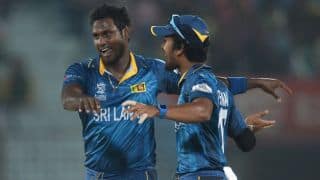