Kiwis have always entered big tournaments as dark horses who punch above their weight.

New Zealand enter the ICC World T20 2014 as a team not many know what to expect off. They will be seen as strong contenders who on their day can surprise the best. But with no clear-cut favourites for the T20 World Cup, New Zealand stand a chance to go all the way. Shrikant Shankar previews the Kiwis.

Once the qualifying matches of the ICC World T20 2014 come to a close, the main draw will commence. There are two groups with five teams each. A total of eight teams are already a surety with two teams joining them from the qualifying phase. Those two teams will not be the favourites despite their propensity to cause an upset. There are no absolute favourites for any T20 World Cup. But there will be those who are more likely to do well.

The authour feels that amongst those eight teams already there, one can draw out two sets of favourites. One set of four teams who stand a better chance to win the competition and the other set of four teams who have stand a slightly lesser chance. Defending champions West Indies, Sri Lanka, Pakistan and Australia come under the first category. India, South Africa, England and New Zealand come in the second. Since it is a T20 tournament, the margin between the teams is lesser as matches can be decided in a matter of only one over.

This is where New Zealand stand a good chance to win the World T20. In the 50-over World Cups, the Kiwis have done exceptionally well till they reach the semi-finals. South Africa are known to be chokers and rightly so. But New Zealand cannot come under that category as they have always punched above their weight. South Africa have almost always been favourites. New Zealand have lost those semi-finals to superior teams almost on each occasion.

New Zealand’s record at T20 World Cups is mixed. They reached the semi-finals of the inaugural World T20 in 2007. But have failed to do so ever since. This time around they are a different unit. Much work has been put into the overall setup as New Zealand will co-host the ICC World Cup 2015 with Australia. A good showing on home soil is necessary. As the team pulls along towards that goal, the Black Caps have become a better unit.

They are led by the talismanic Brendon McCullum. He will have his confidence on a high after his triple century against India in February 2014. That will put him on a high pedestal amongst his teammates and they will believe more in him as a leader. The Kiwis have some power hitters and good limited-overs bowlers. Corey Anderson holds the record for the fastest international century ever off 36 deliveries. Although that was in the 50-over format, anything like that will light up the T20 World Cup.

Martin Guptill, Kane Williamson and Ross Taylor make up the rest of the batting power-house. The likes of Anton Devcich and Colin Munro complete the batting. Luke Ronchi is a good wicketkeeper who can do his fair share of hitting with the bat. Apart from Anderson, New Zealand have some very handy all-rounders in Nathan McCullum and James Neesham.

The bowling department looks promising with Trent Boult, Mitchell McCleneghan, Tim Southee and Kyle Mills. Ronnie Hira is the only genuine spinner, but he is not well-established. Like any other team, there are strengths and weaknesses for the Kiwis. Lack of true greats has been an issue for New Zealand, but they seldom had such players and still impressed in major tournaments.

The Black Caps begin their Super 10s against England in Group 1 on March 22. They then face a tough contest against South Africa on March 24. New Zealand will face a qualifier on March 29. Their last match in the Super 10s is against Sri Lanka on March 31. As eluded to above, according to the author, there is only one team from the top set in Group 1 in Sri Lanka.

So, New Zealand’s chances of progressing to the semi-finals of the World T20 is quite good. They played a warm-up match against Pakistan and lost by seven wickets on March 17. They have one more against Australia on Mach 19. New Zealand are not expected to waltz away with the title come April 6, but since there is a clear lack of genuine favourites, they stand a chance of going all the way. They could be termed as the Dark Horses of the tournament. 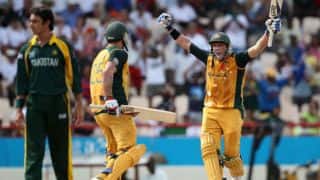