In a nutshell, South Africa have the team which has all it takes to become the world champion. But ultimately, it will come down to how they handle pressure in crunch situations and whether or not they ‘choke’

Since 1996, there has hardly been any major ICC tournament, which the South Africans have not entered as the title frontrunners. Their first ever World Cup appearance in 1992, which came after decades of cricketing isolation, was a pleasant surprise for world cricket as they emerged out of nowhere and made it to the semi-final. A farcical rain-rule ended their dream run, but they went out with their heads held high and a new-found reputation. From there on, they have been serious contenders in virtually every World Cup they participate in, but have somehow failed to cross the final hurdle thus far. ICC World T20 2016, Sri Lanka overview: Difficult transition hurting the team

Over the years, the way they have lost the games at crucial junctures have earned them the tag of ‘chokers’. The 1999 World Cup semi-final tie against Australia and the subsequent ousting; crashing out of the 2003 World Cup after tie against Sri Lanka; disastrous performance in the 2007 World Cup semi-final against Australia and going out after losing their only match in the tournament against India in the inaugural World T20 2007 firmly established their reputation of being chokers and their performance in the further editions of both 50-over and T20 World Cups only enhanced it.

They showed some signs of getting rid of their infamous tag in ICC World Cup 2015, when they won their first ever knock out match in World Cups. But before they could capitalise on the moment and look for a berth in final, the charged-up New Zealand sent them packing in the semi-final, causing yet another heartbreak for the rainbow nation. And like always, as they stand on the threshold of another World T20, they are yet again termed as the firm favourites to win the tournament. And why would not they be? ICC World T20 2016, Pakistan overview: The unpredictable team in an unpredictable format

Here they are, with a batting line-up boasting of the likes of ‘Superman’ AB de Villiers, the ever dependable Hashim Amla and Faf du Plessis, the finishers David Miller and JP Duminy and the young gun Quinton de Kock. In attacking bowlers like Dale Steyn, Imran Tahir, Kagiso Rabada and the all-rounders David Wiese and Chris Morris, they have a bowling line-up that has the fire power to go all the way. Their past record notwithstanding, the teams can take them lightly only at their own peril. But will they win the much elusive title this time around?

Well, as always, there is no reason why they can’t win it. They have a settled unit and though they lost to Australia 1-2 in the T20I series that concluded on Wednesday, they have little to worry as the conditions will not be the same at World T20. They did well recently against India in their own backyard, beating them in both ODIs and T20Is last October. Almost all the players named in their squad play in the Indian Premier League (IPL) and have rich experience of playing in Indian conditions. So in a nutshell, they have the team which has all it takes to become the world champion. But ultimately, it will come down to how they handle pressure in crunch situations and whether or not they ‘choke’ — a tag, as much as they ridicule, they will desperately look to shed. 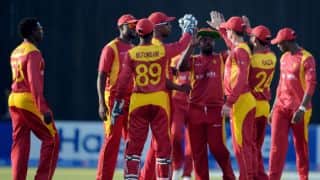