England have not won a single T20 World Cup game against West Indies till date.

The second day of ICC World T20 2016 is set to witness a double header, with Bangladesh and Pakistan clashing at Kolkata and later in the day two former champions West Indies and England taking on each other in Mumbai. Although on current form and with a settled unit England look favourites heading into the match, the past history suggests a different story. Both the teams have met thrice so far in World T20s and the Caribbean side has emerged victorious on all three occasions. These wins came in 2009, 2010 when England won the title and in 2012, when West Indies were eventual winners. Let s take a trip down the memory lane and revisit those encounters. Full Scorecard: England vs West Indies, 15th T20 Match, Super 10 Group 1

1. ICC World T20 2009, Super 8 match at the Kennington Oval, London: Both these sides did not meet in the inaugural edition in 2007. Their first meeting came during the 2009 edition at the Kennington Oval in London during the all important Super 8 stage. Winning the toss, England opted to bat first. In Ravi Bopara, Luke Wright, Owais Shah and Adil Rashid, they had a team loaded with T20 specialists while on the other hand, West Indies fielded the old warhorses Ramnaresh Sarwan and Shivnarine Chanderpaul besides T20 specialists like Kieron Pollard, Darren Sammy and Lendl Simmons.

Batting first, England could manage 6 for 161 from their 20 overs. Bopara (55) and Kevin Pietersen (31) were the main contributors. When West Indies came out to bat, the floodgates of the heaven opened and the target had to be revised. The new target for them was 82 runs from 9 overs and its pursuit, they were reeling at 5 for 45. T20 was a game for young legs they said, but eventually it was the duo of Chanderpaul and Sarwan that guided West Indies home with four balls left.

2. ICC World T20 2010, Group D match at Providence Stadium, Guyana: For the second time in row, rain spoiled the English party. This time around, West Indies won the toss and elected to field first. The decision seemed to be going wrong when Eoin Morgan s 35-ball 55, Wight s unbeaten 27-ball 45 and useful contributions at the top of the order by Michael Lumb, Criag Kieswetter and Pietersen helped them to a huge total of 7 for 191 from the stipulated 20 overs. For West Indies, Suleiman Benn, Sammy and Nikita Miller were bright spots in an otherwise poor bowling display.

When West Indies came out to bat, rain made its way once again, bringing down the target to 60 runs in six overs, which they achieved losing two wickets and one ball to spare. Gayle blasted 25 off just 12 balls and Chanderpaul remained unbeaten on 15. England were unlucky second time on the trot as they could have fancied their chances of winning had it been a complete game. As it happened, England went on to lift the World Cup beating Australia in the final. West Indies vs England, T20 world Cup 2016, Match 15 at Wankhede: Key Battles

3. ICC World T20 2012, Super 8 match at Pallekele Stadium, Pallekele: England s hopes of being third time lucky were once again dashed; this time in Sri Lanka. This time however, they could not complain as they were beaten in a full game devoid of any rain interruption. Also they were beaten by the eventual winners; a fact that gave them some solace. Winning the toss, West Indies decided to bat first and riding on the on-lsuaght by their openers Gayle and Johnson Charles, posted 179 on the board. While Gayle scored 35-ball 58, Charles was more brutal with his 56-ball 84.

In reply, England had their moments as Alex Hales and Morgan crafted brilliant half-centuries but eventually their side fell short by 15 runs. A collective effort by the West Indian bowling unit stopped them from going past the winning line, even though they lost just four wickets in the process. Charles was adjudged the Man-of-the-Match for his knock and his team went on to beat hosts Sri Lanka in the final to win a World Cup after 33 years. 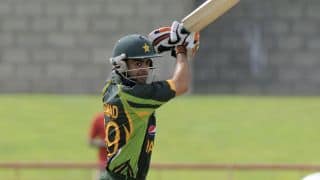