Take a look at the top 11 bowling spells from the erstwhile five editions of the tournament.

ICC World T20 is the most prestigious international Twenty20 tournament. T20 cricket is known for all the slam-bang action, packed in a tiny three-and-a-half-hour capsule. Although the format is known to be considerably tilted in favour of the batters, it has often been the bowlers who have come up with conspicuous bowling spells which had utterly demolished the opposition. On some occasions it has even turned the tide in their favour while in a few others even such excellent bowling spells did not lead the team to victory. Bhaskar Narayan looks at the top 11 bowling spells from the erstwhile five editions of the tournament. Let’s go through these spells in a sequential order begining 2007.

1.  RP Singh (India) 4 for 13 versus South Africa at Kingsmead, Durban in ICC World T20 2007: India managed only 153 for 5 after electing to bat first. They needed some special bowling performance later on to help them win the match. RP Singh was lethal from the very start as he sent both the South African openers — Herschelle Gibbs and Graeme Smith back to the hut when the scoreboard read only 12. He later cleaned up middle-order batsmen Shaun Pollock and Albie Morkel. His scintillating bowling helped India win the match by 37 runs. Even today this bowling spell ranks as one of the best in a T20I by an Indian fast bowler against a top team.

3.  Umar Gul (Pakistan) 5 for 6 versus New Zealand at Kennington Oval, London in ICC World T20 2009: Umar Gul took a five-wicket-haul and gave just six runs in the endeavour from three overs. He picked up the key wicket of Scott Styris, who also happened to be New Zealand’s top-scorer in the match as they were bowled out for measly 99. Pakistan eclipsed the target in 79 deliveries with six wickets remaining.

4.  Charl Langeveldt (South Africa) 4 for 19 versus Pakistan at Beausejour Stadium, Gros Islet, St Lucia in ICC World T20 2010: This was perhaps the best bowling performance of the 2010 World T20 considering Pakistan had some quality batsmen in their ranks for the shortest version of the game. Charl Langveldt tore Pakistan’s middle-order apart taking four key wickets — Mohammad Hafeez, Umar Akmal, Shahid Afridi and Misbah-ul-Haq. Pakistan could manage only 148 for 7 in their allotted 20 overs. It was a close match. Tragedy for Langveldt was that his bowling did not help his team win the contest. South Africa could only score 137 in their full quota of overs. Pakistan’s Saeed Ajmal took a four-wicket-haul as well. However, Player of the Match award went to Umar for his 51-run knock off only 33 balls.

5.  Ajantha Mendis (Sri Lanka) 4 for 12 versus West Indies at R Premadasa Stadium, Colombo in ICC World T20 2012 Final: Another superb performance in a losing cause, came from Mendis in 2012. It was the final of ICC T20 World Cup 2012. Mendis’ four wickets at an economy of 3 helped restrict West Indies to 137 for 6 in 20 overs. In reply, the Lankans were bowled out for 101 as Sunil Narine scalped three wickets in 3.4 overs. In this low scoring match, Marlon Samuels‘ 78-run knock stood out, and he was named Player of the Match.

6.  Harbhajan Singh (India) 4 for 12 versus England at R Premadasa Stadium, Colombo in ICC World T20 2012: India capitalising on Gautam Gambhir‘s 45 and Rohit Sharma‘s unbeaten 55 off 35 balls posted 170 for 4 after being asked to bat first. England, in reply folded for 80 within 15 overs. Harbhajan took the crucial wickets of Eoin Morgan and Jos Buttler. Harbhajan got good purchase from the surface, and he utilised it to good effect. Irfan Pathan also chipped in with a couple.

7.  Ajantha Mendis (Sri Lanka) 6 for 8 versus Zimabwe at Mahinda Rajapaksa International Cricket Stadium, Hambantota in ICC World T20 2012: Ajantha Mendis scripted his name in record books by becoming the first bowler to take six wickets in a T20I match, a record which still stands. Though the opposition was weak, it does not makes Mendis’ achievement any less significant. Giving just eight runs in four overs and taking six wickets against any batting line-up is commendable. Inexperienced and not very talented Zimbabwe batsmen were found wanting against Mendis’ off-breaks and carrom balls. Sri Lanka won the match comprehensively by 82 runs.

8.  Lasith Malinga (Sri Lanka) 5 for 31 versus England at Pallekele International Cricket Stadium in ICC World T20 2012: This was a thrilling encounter in which Malinga’s lethal yorkers and variations made the difference at the end. Malinga took a fiver giving 31 runs in his four overs. He scalped the top four English batsmen — Luke Wright, Alex Hales, Jonny Bairstow and Samit Patel. He came back in the 14th over and sent Buttler back to the dugout, and with it completed a five-wicket-haul. England could score only 150 falling 19 runs behind Sri Lanka’s score.

9.  Rangana Herath (Sri Lanka) 5 for 3 versus New Zealand at Zahur Ahmed Chowdhury Stadium, Chittagong, ICC World T20 2014: This is perhaps the finest bowling spell of the five seasons of ICC World T20. Sri Lanka were folded for a paltry 119 after opposition captain Brendon McCullum invited them to bat first. For New Zealand, Trent Boult and Jimmy Neesham picked up three wickets each. New Zealand, in response folded for an insignificant 60. Herath wrecked havoc as the left-arm orthodox bowler notched up a fiver, giving only three runs in his 3.3 overs.

11.  Ravichandran Ashwin (India) 4 for 11 versus Australia at Shere Bangla National Stadium, Mirpur in ICC World T20 2014: It was an enigmatic display of spin bowling against a quality batting line-up. George Bailey won the toss and invited the Indians to bat first. India scored a competitive 159 for 7. Yuvraj Singh scored a blistering knock of 60 which had five boundaries and four gigantic sixes. Australia found the Indian spinners very tough to handle and were scuttled for 86. Ravichandran Ashwin took a four-wicket-haul in his 3.2 overs. He picked up the wickets of top-order batsmen Aaron Finch and David Warner. Later, he scalped the destructive Glenn Maxwell and tailender James Muirhead taking his wickets tally to four.

[Note: All of these are not necessarily the best bowling spells from the point of view of statistics. Things like the match situation and other intangibles have been taken into account along with the stats.  A good bowling performance against a gifted batting line-up and in pressure and tough conditions may make the cut. At least one bowling spell from each of the five seasons has been included in the final 11 list.] 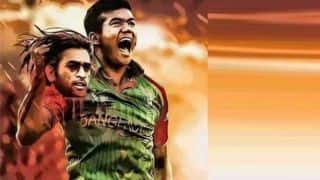