India has not seen a cricket autobiography like Imperfect. By that I do not mean that it is the best book written by an Indian cricketer. What makes Imperfect stands out is its unflinching, refreshing honesty in an era when books are typically written to please.

I played cricket because it served a purpose at that time and not really because I deeply loved the game. No amount of coaxing has got me to play after retirement.

Wham. Sanjay Manjrekar destroys the clich , that of being passionate for cricket uttered by players, journalists, and fans alike, just like that. And this is just the Author s Note.

We, followers of Indian cricket, often complain that the cricketers seldom take to writing. Sunny Days was useful and informative, but that was about it. Rusi Modi and Tiger Pataudi wrote decent books, and perhaps Aakash Chopra is the best of all.

But India has not seen a cricket autobiography like Imperfect. By that I do not mean that it is the best book written by an Indian cricketer. What makes Imperfect stands out is its unflinching, refreshing honesty in an era when cricket books, especially autobiographies, are typically written to please.

If a bookstore ever decides to have a shelf full of candid cricket autobiographies irrespective of quality, space, and time, Imperfect can sit alongside Over to Me (Jim Laker), To the Point (Herschelle Gibbs), Captain s Story (Bobby Simpson), and the daddy of them all, Save the Last Ball for Me (Chris Pringle).

Imperfect begins with Sanjay s strained relationship with Vijay Manjrekar. I won t get into the details of the chapter, for a part of it was published online some time back. It takes courage to reveal your not-too-nice feelings towards your father in print, especially if both of you have been cricketers of some renown at the highest level.

Sanjay Manjrekar has not held his emotions back, and yet he has been fair in his assessment of his father, the person. While he has dark memories, he also explains the possible reasons behind his father s temper. The same chapter also reveals his strong feelings for mother Rekha and the tormented days the siblings faced due to their father s temper. But then, there is also despite all her travails, I think she liked being the wife of the famous Vijay Manjrekar and then the mother of another Test cricketer.

Manjrekar does not follow the conventional linear chronology of matches by scorecard (a redundant concept in the internet era). Instead, he opts to describe his journey with anecdotes and behind-the-scene incidents the reader wants from an autobiography.

As the book unfolds, you cannot help but admire the unabashed confession of emotions. Some of these are so honest that they almost make you do a double-take. Let me cite one. While waiting for his turn to bat in a Deodhar Trophy match in his early days, Manjrekar realised that he won t get to bat for long. It was a lose-lose situation every aspiring cricketer despises, since quick cameos rarely get noticed but failures do. So he requested for a demotion in the batting order, trying to ensure he would not have to bat.

He dissects the problems he went through in 1992, in Australia and South Africa. He criticises himself for being over-defensive and failing as a result. He mentions failed attempts at aggression. He refuses to place the blame on others, for he knows where and how he went wrong, and why he was failing. Not many autobiographies feature sentences like I was rightly dropped. That patch of low scores justified my exclusion.

He dedicates an entire chapter to his Struggles, my favourite from the book. He doesn t hesitate to point out how he was too proud a batsman to look ugly while batting, of how he always wanted good-looking runs . At times he focused so much on defence that he forgot all about scoring; and when he did, it was too late.

At times the honesty is almost unnerving. He compares himself with Dravid, pointing out how he failed to hit the occasional boundary that Dravid could: My 38 not out would be Dravid s 54 not out.

There are some delightful stories, about the first sightings of Harbhajan and Zaheer as net bowlers, why Rajdeep Sardesai decided to not pursue cricket, carrying cricket kits in crowded Bombay locals at peak hours, Khanna Winsrex balls, Srikkanth (then captain) getting into an on-field fight with a fan in Pakistan, getting reprimanded by Vengsarkar before Test debut, Tendulkar hitting Bantoo Singh on the face with a bouncer, slightly unconventional WhatsApp messages from Shoaib Akhtar, and more.

And then, there are the opinions, brutally honest ones: I just wish the cricket fans there [Eden Gardens] had a better understanding of the game than just following it passionately . Or the reason he took to commentary: it would keep me in the public eye. It s something all former cricketers want, even if we don t want to admit it. The sad hierarchical state and poor support staff quality of the Indian teams of the late 1980s and early 1990s are also described in detail.

Despite his immense respect for Gavaskar (it is evident throughout the book), Manjrekar doesn t hesitate to point out that the Little Master s 1971 exploits were against a weak West Indian side. Not many men growing up in the 1970s had been as unromantically frank.

The respect for Imran and the West Indian cricketers is evident, but that is hardly surprising. It is easy to be in awe with these greats. What stands out is his mixed feelings towards the two enigmas of Indian cricket: Azhar and Prabhakar. He played alongside both, respected both for different reasons, and yet, was honest in criticising and describing his love-hate relationships with both.

Manjrekar doesn t hesitate to bring the unsung heroes to limelight either: from Arshad Ayub to Kiran Mokashi to umpire Vijay Gaundalkar, they have all found a place in Manjrekar s world. Mumbai cricket finds a different chapter, with repeated references to its relative innocence compared to the complicated world of Test cricket.

There are some factual errors. For example, Pakistan never toured England in 1990 (did he mean 1992?); the 1996 World Cup was not the first time a world-class crew covered cricket in India (Doordarshan used TWI images during the 1992-93 home series against England); Raj Singh didn t wait for a year after the Pakistan tour to ask Azhar mian, kaptaan banoge? and so on. However, these can easily be taken care of in the next edition.

He also repeats himself at times (how Prabhakar introduced reverse-swing to India, for example), but again, there is nothing too glaring. There are too many pluses in the book to make one ignore these; and hey, isn t it called Imperfect?

Some lines deserve to be quoted. Sample this: The other thing about cricket that I first fell in love with was the flap of the pad above the knee roll, how it would go back and forth when a batsman walked. It would fascinate me … When I had my first set of pads, I was so caught up in their flaps movement that I worried they would distract me from watching the ball.

Or I just loved that clanky, metallic, rhythmic sound the cricketers made with their spiked boots as they would tread carefully on the smooth, hard floor.

But my favourite has to be Religion has no place in my life. I feel it s an outdated concept.

All in all, it s a breezy, intriguing read. It may make you forgive, even get over that WG Grace-Sunil Narine comment. 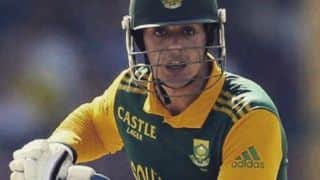