New Director of the Indian team, Ravi Shastri, would have reasons to smile.

The One-Day Internationals (ODIs) have begun, and if the second ODI (the first was washed out) was anything to go by, it showed how the Indian team is much more comfortable with the shorter format of the game. The World Champions showed every bit of grit and confidence that was missing in the abject surrender of the Test matches, indicating the possibility of a turnaround in fortunes in England, says Dhananjay Devasper.

Newly appointed Director of the Indian team, Ravi Shastri would have had multiple reasons to smile as the team produced a world class effort in every department of the game. The start was anything but ideal with Shikhar Dhawan scratching around before getting out. Virat Kohli is fast going from Hero to “Zero” with the number of ducks that he has scored on this tour. But this is Kohli’s comfort zone and he can be expected to make a comeback in the remaining  ODIs.

What would have gladden the hearts is that for once there was no abject surrender or middle order collapse. The batting performances of Ajinkya Rahane and Rohit Sharma would have come as welcome relief. But the day belonged to Suresh Raina in who produced a spectacular innings where he was at his fluent best. Even the short ball did not seem to deter him as he compiled a well deserved century. MS Dhoni produced yet another of his typical ODI knocks giving perfect support to a rampaging Raina as India piled up 304 runs.

The bowling was the surprise element of the game which left England reeling at 85 for five. Alex Hales and Alastair Cook began the innings promisingly putting on 54 for the first wicket. But the Indian seamers had other ideas. Mohammed Shami producing an incisive spell of pace and swing took two quick wickets. Cook was unfortunately adjudged leg-before to a ball which pitched outside leg stump and Ian Bell completely misjudged the line of a Shami in-swinger. After Joe Root was foxed by a Bhuvneshwar Kumar special, which swung in through his defence, India were back in the game.

It was then the turn of Ravindra Jadeja to completely turn the screws on the game. Getting the kind of purchase he was unable to get in the Test Matches, he ran through the English side to pick up four wickets, aided in part by the climbing run rate. England were well and truly outplayed and India picked up an emphatic victory.

While the start is good, Indian fans will be hoping that there is no repeat of the Test Matches where India were off the blocks and then capitulated to one embarrassing defeat after another. Shastri seems to have “directed” this one well and it is a dream debut for him in his “Directorial” venture. Now he will certainly be hoping that then next few efforts will script success and will not flop.

Over to Trent Bridge. 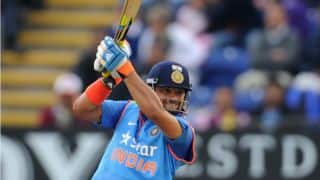 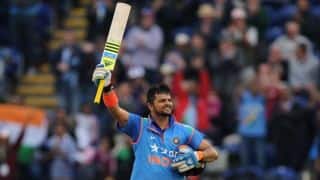