With the current side playing as well as they have been for so long, this Indian team could go on to achieve great things.

It took 22 years, but India finally won another series in Sri Lanka. It was also their first overseas series win since beating West Indies 1-0 in 2011. What was most encouraging for India was not just the 2-1 result but the manner in which they played in each Test. Their defeat at Galle was mainly due to one magical spell from Rangana Herath on a turning Day Four track, but they had dominated most of that match as well. Shiamak Unwalla feels India’s new ‘aggressive’ mind-set has worked wonders, and will likely continue to do so. Full Cricket Scorecard: India vs Sri Lanka, 3rd Test at Colombo (SSC)

Most teams struggle for a few years after going through a transitional stage once the senior members of their side retire. Australia were just about getting through one stage of retirements with the likes of Matthew Hayden, Justin Langer, Adam Gilchrist, Shane Warne, and Glenn McGrath leaving the side in the mid-2000s, but now face a similar upheaval with Michael Clarke and Chris Rogers’ retirements. The once all-conquering West Indies have yet to recover after the depletion of their pace attack in the 1990s, while Sri Lanka now face a massive challenge in the batting order without Kumar Sangakkara and Mahela Jayawardene. READ: India beat Sri Lanka by 117 runs in 3rd Test at Colombo (SSC), win series 2-1

On the other hand, India managed to recover from the retirements of Rahul Dravid, VVS Laxman, and Sachin Tendulkar, and the loss of form of Virender Sehwag, Gautam Gambhir, and Zaheer Khan quite well. India have not done well in overseas Tests since 2011, when all of the above mentioned players were still active. There were fears that India would struggle in the post-“Fab Four” era, but the emergence of young players like Virat Kohli, Murali Vijay, Ajinkya Rahane, Cheteshwar Pujara, and Shikhar Dhawan ensured the transition was fluid. READ: Ishant Sharma takes 200th Test wicket on Day 5 of India vs Sri Lanka 2015, 3rd Test at Colombo (SSC)

The results might not have been coming, but India were playing good cricket overseas. The South Africa tour of 2013-14 was India’s first series without Dravid, Laxman, and Tendulkar. India dominated South Africa for the first four days of the opening Test at Johannesburg before Faf du Plessis and AB de Villiers turned the tables. The match ended in a high-voltage draw but India had shown they would not be pushed around. They lost the second Test at Durban, and the series 1-0, but it was not a tame surrender. READ: Did Ishant Sharma and Dhammika Prasad really cross a line in India vs Sri Lanka 2015, 3rd Test?

Then came India’s tour of New Zealand in 2014. The Kiwis were a side on the upswing even though no one — maybe not even themselves — knew it at the time. The first Test saw India come back from behind to bowl out the hosts for just 105 after they posted 503 in the first innings. India lost by 40 runs, but it was again a respectable one. India dominated the second Test as well, reducing New Zealand to 94 for 5 in their second innings, still trailing India by 152. They were thwarted by Brendon McCullum (302), BJ Watling (124), and Jimmy Neesham (137*), but drew the match comfortably. It was another 1-0 series loss, but again India managed to hold their heads high. READ: KL Rahul has talent, but lacks the consistency needed for Test cricket

The tour of England that followed was to be India’s acid Test. It was the venue where India’s prolonged slump in overseas Tests began, after all. The first Test at Trent Bridge saw saw India post 457 and 391 for 9 decl., but the match ended in a draw. The second Test at Lord’s was a historic one for India; they beat the hosts at Lord’s for the first time since 1986, and it was India’s first overseas Test win since the West Indies tour of 2011. India had finally taken a 1-0 lead, but they had run out of steam. A resurgent England smashed India in each of the next three Tests, bowling out the visitors for meagre scores of less than 200 in five of the six innings that followed. The Indian batting had suffered a collective failure once again, and there were apprehensions that they would once again fall apart. READ: Cheteshwar Pujara emulates Rahul Dravid, Virender Sehwag, Sunil Gavaskar in India vs Sri Lanka, 3rd Test

It was not to be, though. Under Kohli, India showed a brave new attitude. Going for the chase on the final day against Australia in the first Test at Adelaide, they managed to come within 48 runs of pulling off a massive win. Though they lost, the message they sent was clear: writing off India was not an option opposing teams could consider. India also put in a good performance in the second Test at The Gabba, scoring 408 after batting first and taking six Australian wickets in a small fourth-innings chase. It was another loss, but a fighting one. India drew the next two Tests, with Kohli, Vijay, and Rahane all batting wonderfully. READ: Cheteshwar Pujara’s century could push Rohit Sharma out

After dominating Bangladesh in familiar Asian conditions, rain played spoilsport to deny India a win. Coming to Sri Lanka, India were finally in with a serious chance of pulling off an away win. They dictated terms to Sri Lanka for the first four days of the first Test at Galle but Rangana Herath spun them out in one magical spell on a turning track to undo the good work of Dhawan, Kohli, and Ashwin. Kohli ensured there was no let-up after that, finishing off the next two games at P Sara Oval (PSS) and Sinhalese Sports Club (SSC) to help India win their first series in Sri Lanka since 1993. READ: Virat Kohli’s first win as Test captain vindicates ‘aggressive’ approach

It was Kohli’s first series win as captain and India’s first overseas series victory since 2011. It was also the first time in their history that India won an away series after trailing 0-1 (they have won two series at home after being 0-1 down). It may have taken some time, but India finally broke free. With the current side playing as well as they have been for so long, it is not inconceivable that this Indian team could go on to achieve great things. This is certainly a good way to start. READ: Kumar Sangakkara vs Ravichandran Ashwin: The final four dismissals of the legend’s career 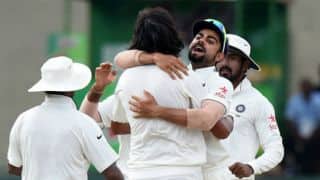 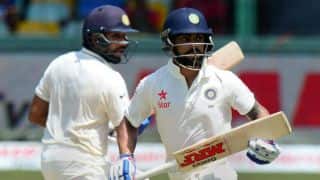