It took just three balls with the new ball for Ishant Sharma to drill the final nail into Sri Lanka’s coffin when he had Angelo Mathews out LBW for 110 on Day Five of the third and final Test at Sinhalese Sports Club (SSC), Colombo. Mathews, who had battled for 240 balls, was struck in front after frustrating the Indians since the last session on Day Four. It was Ishant’s 200th Test wicket in his 65th match. Ravichandran Ashwin then got rid of Rangana Herath and Dhammika Prasad in the same over before the last wicket was taken by Amit Mishra as Sri Lanka were bowled out for 268 and India won by 117 runs. It was India’s first overseas series win since beating West Indies in 2011, and their first Test win in Sri Lanka since 1993. Cricket Scorecard: India vs Sri Lanka, 3rd Test at Colombo (SSC)

Angelo Mathews and Kusal Perera put on a wonderful 135-run partnership that frustrated the Indian bowlers for close to 40 overs. Perera became the second Sri Lankan to score two fifties on Test debut, the first being Dinesh Chandimal. Perera was finally dismissed going for a reverse sweep that went right into the hands of Rohit Sharma at point. Rohit celebrated and it seemed as if Perera was given a send-off by some fielders. It was Ashwin’s second wicket and the only one that fell in the session. READ: Ishant Sharma takes 200th Test wicket on Day 5 of India vs Sri Lanka 2015, 3rd Test at Colombo (SSC)

Mathews and Perera batted wonderfully on a pitch that eased out after being lively for the pace bowlers for the first three days. Perera made sure that comparisons between him and Sanath Jayasuriya were accurate, hitting 70 off 106 balls with 11 fours. Mathews completed another century, his second of the series, and was unbeaten on 110 at tea. Cricket Updates: India vs Sri Lanka, 3rd Test, Colombo, Day 5

Mathews batted resolutely for Sri Lanka, but India took two crucial wickets in the morning session. Mathews went to lunch unbeaten on 56 with Kusal Perera at the other end as Sri Lanka reached 134 for 5, trailing by 252 runs after Umesh Yadav and Ravichandran Ashwin took one wicket each in the morning session to further India’s chances of a series win in Sri Lanka for the first time since 1993. Amit Mishra, Stuart Binny, and Ishant Sharma bowled well also after Mathews and Lahiru Thirimanne resisted for over 15 overs. India now need five wickets to win while Sri Lanka will be hoping for rain to interrupt once again. READ: Kusal Perera creates record during India vs Sri Lanka 2015 3rd Test at SSC, Colombo

Umesh struck early on Day Five, getting Kaushal Silva to pull a quick short ball. Silva was unable to get it off the middle of the bat, and ended up offering a simple chance to Cheteshwar Pujara at midwicket. Thirimanne and Mathews then batted together for over 15 overs, scoring just 33 in the partnership. Thirimanne was finally done in by an excellent reaction catch from KL Rahul off Ashwin’s bowling. Thirimanne looked to turn the ball on the leg side but got a leading edge. Rahul at short leg reacted immediately, sticking out his left arm over his head and popping the ball up in the air before accepting it again. Mathews and Perera then played out till lunch. READ: Ishant Sharma, Dhammika Prasad, Dinesh Chandimal, Lahiru Thirimanne charged with breach of ICC Code of Conduct in third Test between India and SL in Colombo

Earlier, Ishant Sharma and Umesh Yadav struck early in Sri Lanka’s innings to reduce the hosts to 21 for 3 before Kaushal Silva and Angelo Mathews took them to 67 for 3 at stumps, 319 behind their target of 386. Tensions had escalated toward the end of India’s innings with Ishant having a run-in with Dhammika Prasad, Lahiru Thirimanne, and Dinesh Chandimal. India’s pace spearhead had a stare-down with Dhammika, who kept bowling bouncers at him. Ishant ducked a few times, and then took a single, angrily taunting Dhammika while taking the run. Ishant also brushed past Chandimal along the way. The situation looked like an explosive one but luckily it did not escalate into anything ugly as Ravichandran Ashwin was the last man to be dismissed for a defiant 58 as India were bowled out for 274. READ: Did Ishant Sharma and Dhammika Prasad really cross a line in India vs Sri Lanka 2015, 3rd Test? 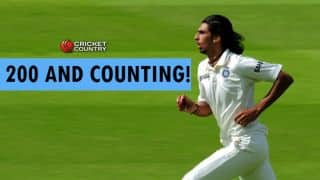