One bad day, one bad decision could knock India out of the World Cup!

India have had an excellent outing at ICC Cricket World Cup 2015. They’ve made it to the quarter-finals after going undefeated in the group stage. All of this will count for nothing if they fail to beat Bangladesh in the quarter-finals. Pramod Ananth feels India must not get complacent moving ahead in the tournament.

Nobody can deny the fact that India have performed extremely well in ICC Cricket World Cup 2015 so far. Their batsmen have delivered and the bowlers have given them breakthroughs when the team required it. They now take on a spirited Bangladesh in the quarter-final at Melbourne and if everything goes well, they’ll return to the same venue to play the final on March 29. LIVE SCORECARD: India vs Bangladesh ICC Cricket World Cup 2015 Quarter-Final 2

After a torrid tri-series leading up to the World Cup, not many would have expected India to do so well. But they have started peaking at the right time and have won all six games in the group stage convincingly. The opening game against Pakistan was a tense affair, but India came out well on top, riding on a century from Virat Kohli to win the game by 76 runs, thereby maintaining their record of not losing to Pakistan in World Cups. That was India’s first international victory on Australian soil since their tour began in December 2014. That propelled India to achieve success in the remaining matches. ICC Cricket World Cup 2015: SCHEDULE & MATCH DETAILS

Skipper MS Dhoni has been shrewd in picking his team. He has not tampered with the winning combination, and has continued the same playing XI in all matches except the one against West Indies, where Bhuvneshwar Kumar replaced Mohammed Shami due to injury. In spite of guaranteeing a spot in the last eight, Dhoni did not try to experiment by bringing in other players like Stuart Binny, Ambati Rayudu, or Akshar Patel into the team. While addressing the press after India’s four-wicket win over West Indies, Dhoni was asked whether the bench strength will be tested in the upcoming games. To that, he bluntly replied, “Bench strength will warm the bench”.

The bowling is finally managing to live up to its talent. Shami and Umesh Yadav have been fantastic with the new ball. They have 22 wickets between them and with the inclusion of Mohit Sharma, they have become even stronger. Mohit with his change of pace has troubled the batsmen and has 10 wickets to his name. ICC Cricket World Cup 2015: Complete Coverage

It is not always one sees an off-spinner from the sub-continent do so well in Australia and New Zealand, but Ravichandran Ashwin has picked up 12 wickets with some clever bowling. His best performance came against United Arab Emirates (UAE), where he picked up four for 25 —his best figures in One-Day Internationals (ODI). He has varied his pace well, asked questions with his carom-ball, and has chipped in with a few seam up deliveries as well.

Shikhar Dhawan, Kohli, and Suresh Raina too have been among the runs. Each of them have scored at least one century apiece so far. Dhoni too has also been doing what he does best—finishing off the match coming down the order. The form of Ravindra Jadeja is a concern for India, as the left-arm spinner has picked up only seven expensive wickets and has a bad time with the bat. The inclusion of Stuart Binny or Akshar Patel in the quarter-final will not be all that surprising.

It has been an excellent turnaround by India so far, but they have to realise that one bad day, one bad decision could knock them out of the World Cup. Dhoni, having led India to success in the previous edition at home, must ensure that he and his team does not take things lightly. India cannot afford to rest now, the real battle has just begun! 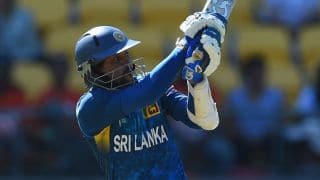