India must focus on other areas rather than changing captain after disastrous tour.

India began an extremely critical season with a forgettable outing in South Africa, followed by the disastrous tour of New Zealand. The tour of New Zealand, wherein the tourists failed to win even a single match, did no good to the Indian side keeping in mind the tough assignments that lie ahead in England and Australia. The Indian cricket board and team management will have to look at the right areas for improvement, rather than changing leadership role, in order to bring an end to the ignominy that resides with them when they go abroad. Devarchit Varma has more…

When India reached South Africa for a truncated tour in December last year, there began a very critical season for the Mahendra Singh Dhoni-led side. They had not won a single Test match overseas since that humiliating tour of England in 2011 and the side has been revamped with the new generation of players taking charge. But unfortunately, the results weren’t in favour and the team went down fighting hard. After losses in South Africa, the tour of New Zealand had the same story; the team went down fighting once again.

The Board of Control for Cricket in India (BCCI) and the Indian team management find themselves in trouble once again after these forgettable tours. While these tours presented Indians an opportunity to start afresh with new faces, the story remained same and the team certainly was found wanting time and again in certain areas. There are indeed some areas where the Indians need to look at, but change in captaincy at this juncture may not be the ideal move.

Dhoni’s critics would certainly launch an attack yet again, citing his unending poor record overseas but one also needs to consider the fact that handing over the charge to someone as young as Virat Kohli will not be the smartest of the moves right now. Martin Crowe, the former New Zealand cricketer is of the view that Dhoni must be released from the Test captaincy job and Kohli should take over. Kohli has been Dhoni’s deputy for quite a while and is touted to take over the leadership role. But the 24-year-old being India’s frontline batsman with the responsibility of scoring bulk of runs must be given more time to find his feet in international cricket. He should at least have the necessary experience of playing Tests in countries like England and Australia, where conditions are completely different, without the additional burden of captaincy and improving dismal overseas record that seems to be a humongous task.

It also must be considered that Dhoni, though being erroneous at times with his policies and decisions on the field, remains the best man to lead India across the formats. Bringing a change in the leadership role with just a year left for the ICC World Cup 2015 is not the need of the hour. Dhoni has been exceptional across all formats and he deserves to continue with his role, and like the many challenges that he has overcome in his nine-year long career, he must sign out — if he has to after the World Cup in 2015 as being said — with better shows in England and Australia.

Even if Kohli takes over the charge ahead of the England tour, the challenge will be too tough to someone as young as him in regards to leadership and on personal front. Instead, bringing him at the helm of leadership when India starts playing at home again will be the right way to induct Kohli in the role. Any player would be comfortable in starting his captaincy stint at home with favourable conditions and crowds behind him, rather than in alien conditions and against a hostile crowd. At the same time, if it has to be Kohli, he would be expected to score heavily as well. The major part of India’s overhaul in Test side began after the tour of Australia in 2011-12 with young players finding their feet in assignments at home, and Kohli too, must be awarded right opportunity to begin a new era. Changing leadership is one of the impending tasks in Indian cricket, which can be addressed at the right time.

Leadership role can be very demanding, and in the past it has been witnessed that players’ performance goes down a little bit with the additional responsibility coming in. Alastair Cook is the perfect example. A marvellous batsman couple of seasons back, he is not in the same form now and captaincy role, and the happenings in the England cricket has certainly put his batting on the backseat. India cannot afford to lose one of their frontline batsman, especially when the side is young and in rebuilding phase.

What the Indians can do in order to revive their fortunes at the moment is to look in the areas where they’ve been struggling — a formidable pace attack and letting go the opportunities that could help them make it big. Few sessions that cost India the series in South Africa (according to Dhoni), dropped catches in the second Test against New Zealand, Ishant Sharma’s see-saw form and an ordinary fast bowling attack has been one of the foremost reasons. The bowling though did surprisingly well in New Zealand, but it certainly hasn’t been up to the desired level. With the side struggling majorly due to an ordinary attack, the role of bowling coach Joe Dawes must be scrutinised.

With the young guns fielding has certainly improved, but the instances like Ishant’s hair coming in way of a simple return catch (of Brendon McCullum in  the second innings of the final Test, when he was batting on 36), are not only bizarre but also carry unwanted humiliation. The Indians certainly won’t like a repeat of any of this. 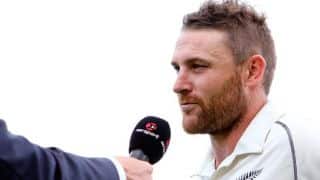