England have won 27 Tests at Edgbaston and lost 8. Their win-loss ratio here is 3.375, their best at a major home ground. On the other hand, India have drawn 1 and lost 5 of their matches here.

England have won 27 matches and lost 8 at Edgbaston, venue of the first Test against the upcoming series against India, which gives them a win-loss ratio of 3.375 at the venue. This is way higher than their performance at one of their six major grounds. To put into perspective, the corresponding ratio reads 2 at Old Trafford, 1.863 at The Oval, 1.656 at Lord’s, 1.32 at Headingley, and 1.294 at Trent Bridge. It is surprising that they have played only 50 Tests at Warwickshire’s home ground, the least among the sextet.

India have played only 6 times at the ground, and is one of two major English grounds where they have not won a Test (Old Trafford is the other). In fact, India have a pathetic record at Edgbaston, losing 5 Tests and drawing 1. At Old Trafford they have fared somewhat less worse, losing 4 and drawing 5. Let us have a look at India’s Test outings at Edgbaston over years.

It is a somewhat surprising that Birmingham, despite its South Asian population, never hosted India or Pakistan till 1962. When India were blanked 0-5 in 1959, Edgbaston was the only major English ground that did not host a Test. India finally played at Edgbaston in 1967 under Mansur Ali Khan Pataudi, whose father had both played for England and led India to England.

India played three Tests in early summer, at Headingley, Lord’s, and Edgbaston. By the time they reached Edgbaston the series was already lost. Worse, their seamers Subrata Guha, Rusi Surti, and Sadanand Mohol were down with injuries. All they had was Karnataka batting all-rounder Venkataraman Subramanya (whose 101 First-Class matches would yield 70 wickets at 44).

For the only time in history did India play their entire spin quartet Bishan Singh Bedi, Bhagwat Chandrasekhar, EAS Prasanna, and Srinivas Venkataraghavan. The wicketkeepers Farokh Engineer and Budhi Kunderan both played. Kunderan even opened bowling despite the fact Pataudi, by his own admission, had no clue what he bowled.

The series had been conceded at Lord’s, when Chris Old and Geoff Arnold had skittled India out for 42 in 17 overs. The defeat, along with the allegation of shoplifting on Sudhir Naik and being asked to leave by the Indian High Commissioner at London, had taken a toll on the Indians.

Further humiliation awaited them at Edgbaston. They were first bowled out for 165 by Arnold (3 for 43) and Mike Hendrick (4 for 28). Then they were made to chase leather for 140 overs before Mike Denness decided to end the humiliation by declaring on 459 for 2. Denness himself scored a round hundred while Dennis Amiss and Keith Fletcher both got fifties, but the massive innings came from David Lloyd (214 not out).

India were then rolled over for 216. To his immense credit, debutant Naik batted gutsily amidst the psychological pressure of the allegation, top-scoring with 77.

By an innings; again

India were the only major team that survived Kerry Packer. However, they were also approaching the end of an era: Pakistan had thrashed Prasanna into retirement, and both Bedi and Chandra were playing their last series.

They were up against a strong England outfit this time. England piled up 633 for 5, all five wickets falling to Kapil Dev the only Indian to have an impact of any sort. David Gower (200*) and Geoff Boycott (155) encashed on the feeble attack in contrasting styles, while Graham Gooch and Geoff Miller also got fifties.

Sunil Gavaskar (61 and 68) and Gundappa Viswanath (78 and 51) both scored twin fifties in response, but India sank without a trace against Ian Botham (7 for 156 in the Test) and Hendrick (6 for 81). They lost by an innings; again.

With victories at Lord’s and Headingley, India had already taken an unassailable 2-0 in the series when the last Test began. The Indian pace attack seemed more potent with Chetan Sharma back, but Mike Gatting thwarted them with an unbeaten 183.

England scored 390, and India got exactly the same number of runs. Then Chetan backed his 4 for 130 with 6 for 58, leaving India 236 to score. They reached 101 for 1 before Phil Edmonds struck. At 105 for 5 it seemed India might not pull it off, but Mohammad Azharuddin saw them through in the company of Kiran More, promoted up the order.

Cable television was still new in India when they toured England in 1996. That is probably the only reason Sachin Tendulkar’s fans rarely hail his Edgbaston 122 among his greatest.

The now-iconic Test debuts of Sourav Ganguly and Rahul Dravid were still a Test away. Under a cloudy Birmingham sky, Chris Lewis (2 for 44), Dominic Cork (4 for 61), and Alan Mullally (3 for 60) bowled out India for 214. It could have been lower had there not been a fight from an unexpected source: with a 65-ball 52, Javagal Srinath had lifted India from 150 for 8.

Srinath (4 for 103) and Venkatesh Prasad (4 for 71) then kept eating into the England batting line-up. England were reduced to 215 for 8, but India were hit badly by the lack of a third seamer at that stage. Srinath and Prasad had run out of the initial steam, and Nasser Hussain (128) ended up adding 49 for each of the last two wickets, with Min Patel and Mullally.

And then, starting 99 runs behind, India became 36 for 4. He dominated every bowler, played all around the wicket, executing almost everything to perfection on a pitch and under conditions offering plenty of movement. This time Lewis got 5 for 72, but Tendulkar stood firmly between him and others to push the Test to a fourth day.

Chef and a pair

MS Dhoni’s men had received a major blow at Lord’s, when Zaheer Khan hobbled out early in the Test. They fought hard at Headingley before Stuart Broad took the match away. There was little fight left in the Indians when the sides reached Edgbaston.

Virender Sehwag, touted to be India’s messiah on comeback, registered a king pair. India scored 224 and 244, Dhoni top-scoring in each innings with 77 and 74*, but India generally had no response to England’s fast bowlers Broad, James Anderson, and Tim Bresnan.

In between India’s two innings was a 13-hour marathon from Alastair Cook. England declared when he got out, 7 short of a triple-hundred. Eoin Morgan also got a hundred, and India sunk without a trace to their biggest margin of defeat on the ground by an innings and 242 runs. 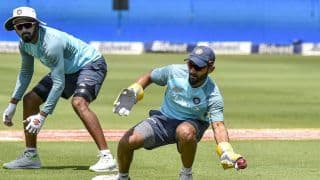 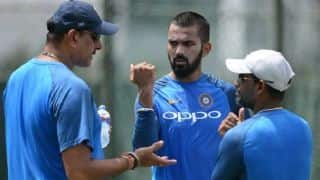