It won’t be easy for the Indian team to bestrode a New Zealand side in good form.

With India embarking on a tour to New Zealand, there are high expectations of the team doing well. Back in 2009, when they toured New Zealand, India won both the One-Day International (ODI) and the Test series. However, if we look at the upcoming tour with a bird’s eye-view, it won’t be easy for the Indian team to bestrode a New Zealand side in good form.

Over the years, one has come to expect seaming decks in New Zealand, where the ball tends to dart around a lot. Who can forget Shane Bond and company annihilating the Indian team in 2002-03 on some green tops! But as the clock has ticked by, the tracks, especially for ODIs, have become flat.

India are going to play their five ODIs at Napier, Hamilton, Auckland and Wellington (Westpac Stadium). These are relatively small grounds and the Indian batsmen in theory should have a whale of a time batting on those tracks. In fact, in 2009, India and New Zealand notched up some monstrous totals on the board with the swashbuckling opener, Virender Sehwag at the peak of his prowess, smashing opposition bowlers to shreds.

This time around though, New Zealand have few new faces in their ranks. Corey Anderson soared into the limelight and won thunderous applause for his marvellous and breathtaking striking during his record breaking effort in the recently concluded ODI series against the West Indies. Mitchell McClenaghan, the left-arm fast medium bowler, can generate decent pace and more importantly, extract bounce out of most surfaces. He also brings that much needed variety into the attack with his left-armer’s angle. The young fiery fast bowler, Adam Milne can bowl with serious pace. It is always a boon to have someone bowling with a burst of extra pace. When you bowl quick, you don’t need to worry too much about control.

On the batting front, Martin Guptill has shown an insatiable hunger to essay big scores in the ODI format in recent times. Kane Willaimson, with his steady batsmanship, brings a bit of solidity in the middle-order.

In the Test team, Trent Boult is making waves with his ability to swing the ball around the corners and by taking a slew of wickets. He belongs to the old school of swing bowling, as he believes in pitching it up and making the batsmen play with the new ball. Unlike other modern day pacers, he also uses the toe-crushing yorker to good effect. His partner-in-crime, Tim Southee, too can swing the ball with a cocked wrist. He has that change up off-cutter and a hugely underrated bouncer.

Hamish Rutherford, the son of former New Zealand cricketer Ken Rutherford, can play eye-catching strokes, but other that sparkling century on debut against England, he hasn’t made his presence felt in the top echelons of the game.

A few old hands like Brendon McCullum and Ross Taylor are still around. In fact, Taylor has been in the form of his life. He seemed to make batting look easy against the West Indies. McCullum has taken over the mantle of captaining the side. He tactically comes across as a fine captain, but would be disappointed by the fact that they didn’t deliver the knockout punch to England in the final Test of that series at Auckland and recently, in the first Test match against the West Indies.

India have a young and firebrand side that has plenty of self belief to conquer towering challenges. Their performance away from home though, hasn’t been up to the mark. Make no mistake, the plucky Kiwis would come out all guns blazing in their own patch and look to give a few seismic shocks to the Indian line-up. 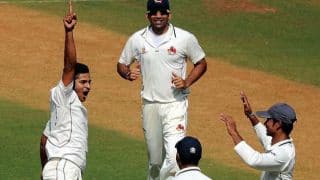