South Africans relax ahead of another tense game, as they look back on the last match.

Morning flights can be a pain. But despair turns to delight when you realise that the entire South African team is boarding the same plane as you. And your joy knows no bounds when you find Allan Donald on the adjacent seat. Never mind if he’s busy watching a movie on his iPad. You hope the 50-minute journey from Johannesburg to Durban takes longer.

South Africans love their Christmas holidays. Their cricketers are no different. Almost every member of the Proteas — including the support staff — has brought his family (WAGs and kids, even mums and dads) to Durban for the Boxing Day Test. “This is family time. It’s our annual ritual. It’s a pity we aren’t going to Cape Town for the New Year Test,” a member of the team management said. One should have helped him with N Srinivasan’s cellphone number.

Soon after check-in and security, you spot Morne Morkel checking into a restaurant. You follow suit. He orders three portions of a full English breakfast. “AB [de Villiers] is on his way,” he says, perhaps indicating he is not a big eater. So how’s the ankle? “It’s good,” he says. Will he play in Durban? “Let’s see.” The wide grin on his face suggests he won’t. The selectors have added Kyle Abbott, another tall pacer, to the squad. Soon, de Villiers walks in. His wife, Danielle, is by his side. They join Morkel at the table.

It’s now time to board the plane. Graeme Smith is rushing towards Gate D6 with Cadence and Carter, his little babies, who keep him busy. They are sleeping in a two-seater pram.

The eyes hunt for the hero of the match. They find him soon enough. Faf du Plessis is travelling with his wife, Imari Visser. “It was my call,” he says of the run-out made possible by a brilliant throw from Ajinkya Rahane. “With 16 runs to get from 3.2 overs, I can’t blame anyone. It was as superb piece of fielding. Next time, I will try to clear the infield instead of taking such a risky single,” he adds. But he’s smiling heartily.

“My target was to set it up for the last over. Once I got out, I did not know what was happening on the field. I was too drained,” he admits. Batting for two-and-a-half sessions can do that to you.

Apparently, he fell flat on his back in the dressing room.

It may be recalled that du Plessis had saved South Africa with a similar effort in Adelaide last year.

That was his debut. “It all started in Adelaide. There, I came to believe it is possible to bat four sessions in a Test match. But in Adelaide, we did not have a target. We just had to bat to save the game. Yesterday [Sunday], our plan was to bat out two sessions. We never thought about the win till we got to tea. But when AB got out, I knew the task was becoming difficult. I wanted to stay till the end.” He couldn’t, but so what? He played a knock for the ages. 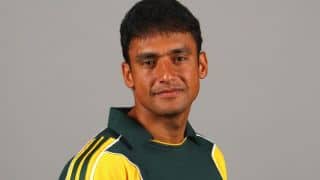