Ashwin produced a spell for the ages on a surface that offered him marginal assistance by way of turn.

ADELAIDE: As he stands at the top his bowling mark, twirling the cricket ball with his big fingers, you sense that he isn t just going to trundle up and let the little orb go. You can almost feel the wheels ticking inside his head, the brain plotting and commanding the body and the fingers to deliver the denouement with telling finality.

R Ashwin isn t your everyday offspinner. He can t be, not when he is the fastest to 300 Test wickets.

If there is one criticism that has accompanied Ashwin all his celebrated career, it is that he isn t as potent overseas as he is on responsive tracks at home. The numbers would seem to buttress that theory he has 102 wickets in 26 away Tests at 31.78, 43 of them having come in seven matches in Sri Lanka and Bangladesh. In stark contrast, at home, he has 234 scalps from 48 Tests, numbers that compare favourably with most of the spinners to have come out of the sub-continent.

While it might be unfair to expect Ashwin to stack up the same jaw-dropping feats overseas as at home, the engineer from Chennai isn t complaining. He has often been compared and pronounced to be found wanting – to Moeen Ali and Nathan Lyon but blessed with the remarkable ability to cut out all the noise, he has largely gone about his business focusing inwards rather than being distracted by extraneous judgement.

At the Adelaide Oval on Friday, the second day of the first of four Tests, the 32-year-old produced a spell for the ages on a surface that did offer him marginal assistance by way of turn, but which also negated his primary weapon through its increasing slowness. In a wonderful exhibition of control, guile, intelligence, awareness and economy, he tied up Australia s left-heavy top-order in knots, providing India with just the potency they were seeking after being restricted to 250 in their first innings.

With only four specialist bowlers in their midst, it was apparent that India would rely heavily on Ashwin to shoulder a heavy workload and complement the three-pronged pace attack of Ishant Sharma, Jasprit Bumrah and Mohammed Shami. Ashwin did all that and more than was asked of him, finishing the day with three for 50 from 33 wonderful overs during which he married parsimony and penetrativeness with rare felicity.

It helped that Friday wasn t anywhere near as hot as the previous afternoon, when the mercury hovered around the 40-degree mark and a cool wind wafted across the oval. That, however, didn t mean 33 overs in a day, even for a spinner, was commonplace. That Ashwin went at just above 1.5 runs to the over while cleaning up debutant Marcus Harris, the in-form Usman Khawaja and the experienced Shaun Marsh, all left-handers, was tribute to his skills as well as his physical and mental fortitude, further evidenced by an unchanged opening spell of 22-5-38-3.

Ashwin s mind, sharp as a tick and racing at the rate of knots, has occasionally been his worst enemy. He has been accused in the past of over-thinking and over-analysing, as well as over-experimenting. Perhaps, that s a fallout of being blessed with inherent intelligence and tremendous variety emanating from hours and hours of practice in the total anonymity of private space. But one man s perception is another s reality, or not, and Ashwin has maintained that, being his severest critic, he knows exactly what he is doing.

Falling into an excellent rhythm from the word go, varying his pace superbly once he had gauged the pace off the surface, and using the angles to brilliant effect, Ashwin asked questions of every batsman he bowled at while relying heavily on the stock off-break. There was no ripping turn, no magic ball that pitched outside leg (to the leftie) and flattened off. There were no dramatic puffs of dust exploding off the surface, no theatre and histrionics. Instead, and not unlike Cheteshwar Pujara the other day, Ashwin s was a display of patience and commonsense and understanding as he fell back on the basics and the reaped the rewards for persistence.

The not insignificant breeze wafting from right to left as he operated from the River End allowed him to get the ball to drift nicely into the left-hander, the revs exacerbating sudden dip, and the fingers imparting adequate turn to keep them guessing. Harris was foxed by a drifter that held up just enough to catch the inside edge and lob to silly point off pad, while Marsh was cleaned up for a fifth time by Ashwin with a tossed-up delivery that simply didn t arrive and therefore was deflected on to the stumps off the inside edge to an attempted slash-drive.

The dismissal that must have pleased Ashwin the most was that of Khawaja s, the most accomplished batsman in this relatively threadbare Aussie top-order. Khawaja had seen off three hours and 124 deliveries when lovely drift, wicked dip and ample turn caught his left glove and nestled in stumper Rishabh Pant s gloves. For an offspinner to get a set batsman thus on day two of a Test in Australia was awesome. Just awesome.

Obviously if I wasn’t happy with today’s spell, I won’t be happy with many other days, Ashwin laughed at the press conference post stumps. Another ‘happy spell’ over the weekend, and India could so easily find themselves 1-0 ahead. Australia are in a decent position: Marcus Harris 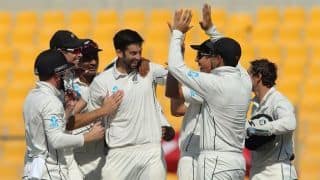