India and Australia are set to play five ODIs and three T20Is, starting from January 12.

India s ICC Cricket World Cup 2015 campaign was on a perfect road until they faced the hosts and eventual champions Australia in the semi-final at Melbourne. India played seven matches, bowling out the opponent in all the matches, before the unfortunate fixture against Australia happened that ended India s reign as world champions. The positivity that can be apprehended from that tournament in the favour of India is their bowling. The top five bowlers of the World Cup included two Indians Umesh Yadav and Mohammad Shami which shows how much India are going to miss the services of Shami in the upcoming five-match One-Day International (ODI) followed by three-match Twenty20 International (T20I) series Down Under. Full cricket scorecard: India vs Australia 2015-16, 1st ODI at Perth

Shami was India s leading wicket-taker for most of the World Cup finished with 17 wickets in seven matches. On the other hand, Umesh over took Shami to finish with 18 scalps with an extra game to his name. It is Umesh, who will have to take the major responsibility of the Indian pace attack in the series. He will be supported by Ishant Sharma, who will bring in both pace and experience and if the duo happen to click for India, the new Australian side will surely see themselves struggling.

The spin duo, Ravichandran Ashwin and Ravindra Jadeja, who have been in great form recently, will be the ones to watch out. Each and every batsman in the Australia ODI squad is a decent player of spin which will enforce immense pressure on Ashwin and Jadeja to bowl at their best.

Strengths: The dominance of the Indian side in the series will depend on the amount of contribution coming from Umesh s end, goes without saying. Since his debut in 2012, the pacer has played five matches against Australia Down Under and has managed 10 wickets from those games. Even in the semi-final in March 2015, Umesh was India s highest wicket-taker in the match with four dismissals. It was Umesh, who got the key wickets of Steven Smith, Aaron Finch, David Warner and James Faulkner. Each of those batsmen are counted among the most destructive batsmen in ODIs; however, his breakthroughs came too late as the opponents had already done the damage with Smith scoring a century, Finch 81 and Faulkner scored a quick 12-ball 21 before getting out. READ: India vs Australia: A SWOT analysis of Australia s all-pace attack for first 3 ODIs

All Umesh has to do is, send these players back to pavilion as early as possible. While Umesh has toured Australia in the recent past, the last time Ishant played Down Under was back in 2008. It was the Commonweath Bank series that also included Sri Lanka, which was India won and Ishant was the third highest wicket-taker of the series with 14 wickets, behind Nathan Bracken and Brett Lee. Even an economical spell without wickets from Ishant will be a huge support for Umesh. The latter will then be able to bowl without any pressure and that will surely reflect in India s good results.

While Australia lack a prominent spinner in the ODI series, India has Ashwin. However, his numbers in Australia indicate that he has not had an impact in those conditions. With just two wickets in five matches is not good enough against the likes of Warner, Finch, Smith, Glenn Maxwell and other experienced Australian batsmen. India need him to replicate his sub-continent magic to trouble the Australians.

Opportunities: Shami s sudden hamstring injury opened doors for Bhuvneshwar Kumar. Bhuvneshwar, who has played just one match in Australia will try and take this opportunity to seal his name in the regular Indian ODI squad. The match was during the Carlton Mid One-Day International Tri-Series 2014-15 and was not a great one for the medium-pacer, as he managed to bag just one wicket and had gone more than four runs an over. The other bowler who will leave no stone unturned to make this series a memorable for himself is Barinder Sran.

Sran played both the warm-up matches at Perth, which India won comfortably against Western Australia XI. The first match was a T20, which India beat the opponents by 74 runs. India posted a total of 182 and in reply, WAXI were 26 for 2 in five overs and both the breakthroughs were made by Sran. The second warm-up match was a 50-over affair, which saw Sran taking no wickets. Although the left-arm pacer did not take any wicket, he was very economical giving just 22 runs from seven overs. He has got off to a decent start and now has to just carry the momentum if he gets picked in the playing XI.

Threats: Shami s absence will undoubtedly hurt the young Indian side. Shami has bagged 13 wickets in his nine matches on the Australian soil. Dhoni s teams usually Ashwin and Jadeja and with the hosts being superb players of spin, you can expect some fireworks from them during their battle with the Indian spinners. Although Ashwin was the leading Test wicket-taker of 2015, his economy differs in the limited-overs. He averages above 30 and is yet to have a five-wicket-haul in the ODIs. Since Akshar Patel performed decently in the warm-up matches against WAXI, he might just be included in the playing XI. Patel bagged two wickets in both the matches, while he batted in just one game, where he remained unbeaten on eight runs. READ: Mohammed Shami’s absence will significantly hurt India’s scope in Australia

Akshar may eventually turn out to be targets of hard-hitting batsmen like Warner, Finch and Maxwell. The Australians have played enough cricket against Akshar in the Indian Premier League (IPL) and they will be well aware of his weaknesses. Despite a string of poor performances in the recent times, Akshar has managed to earn selectors faith through some stellar performances in the domestic circuit. 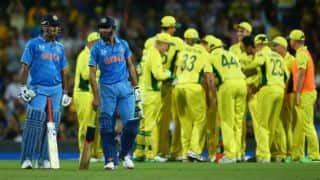 VVS Laxman: India in Australia, 2015-16 — I expect to watch an enthralling series 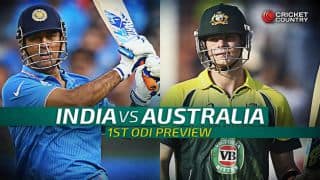