It was, without a doubt, the most keenly contested series in the long Indian winter. Let us check how the Indians had fared.

After a breathtaking onslaught, Ajinkya Rahane was perfectly happy to let KL Rahul get to his sixth fifty in seven innings in the ongoing series. Rahul flicked Steve O Keefe past mid-wicket for a two (he even ran an unnecessary third run, probably just for the sake of it) and pumped the air in ecstasy; and India claimed the Dharamsala Test against Australia in style, regaining the Border-Gavaskar series despite being 0-1 down. The victory also meant a seventh consecutive series victory for Virat Kohli (which put him at par with Steve Waugh and behind only Ricky Ponting). At this point India also hold the rubber against all other Test-playing nations a feat achieved by only Australia and South Africa (West Indies had also done the same without playing Sri Lanka and Zimbabwe when they were both Test-playing nations; that should probably count).

It was a phenomenal comeback for India after their obliteration at Pune. They even conceded a first-innings lead at Bengaluru before the spinners brought them back into the series. Australia were pushed to their limits to save the third Test at Ranchi before India cruised to an 8-wicket win at Dharamsala. It was, without a doubt, the most keenly contested series in the long Indian winter. Let us check how the Indians had fared.

Jadeja was fantastic with ball throughout the series, but perhaps his greatest show came at Ranchi: he claimed 9 of the 25 wickets to fall on a flat pitch and ran out a tenth. He also biffed his way to a magnificent fifty an innings which he improved upon at Dharamsala. Jadeja also took 5 wickets at Pune, 8 at Bengaluru, and 4 more at Dharamsala; he went for 2.17 an over and scored at a strike rate of 63; and he fielded magnificently. He also overtook Ravichandran Ashwin as the No. 1 bowler in ICC Test rankings in the progress, and deservingly so.

How good was Umesh? He always had the pace, but this time he bowled in the right channel and to a right length, and the numbers show his impact. He also used his bouncer sparingly, often hurried batsmen with the extra pace, and maintained the hostility despite trying conditions. The fact that he remained fit throughout the long season also bears testimony to the immense hard work he has put in. The metamorphosis from an unlucky bowler to a successful bowler is finally in place.

The only criticism one can dish out for Rahul is probably his inability to convert any of his 6 fifties to a hundred though, to be fair, three of his fifties were 64 out of India s 105, 90 out of 189, and an unbeaten 51 in a chase. Rahul also got his runs at an impressive strike rate of 56, and made sure India never had a collapse at the top of the order.

Pujara gets half a point less than Rahul for his inability to accelerate despite his big scores. He ended as India s leading run-scorer, but a strike rate of 39 was certainly not impressive for someone who had the opportunity to dominate the bowling on multiple occasions. He gets half a point for some excellent catches close to the bat.

Saha s show behind the stumps varied between the sublime and the is-it-a-bird-is-it-a-plane. He was generally faultless, and his few glitches came on pitches where it was difficult to keep wickets. He got a hundred at Ranchi and played two extremely crucial innings at Bengaluru and Dharamsala. As always, he finished as India s invisible man.

Ashwin has been so good of late that they have called him out-of-form despite his 21 wickets from 4 Tests at 27. Fully aware of the fact that Jadeja outshone him in the series, Ashwin was happy to play the support act. Amidst all that he ran through Australia at Bengaluru, and was potent without a lot of people realising. Unfortunately, his failure with bat had taken some sheen off his reputation as the world s leading all-rounder.

Barring that gutsy 52 at Bengaluru, Rahane was almost not there throughout the series till the Dharamsala Test, that is. He stepped into the gigantic shoes of Virat Kohli. He made some crucial bowling changes. He made sure the intensity was maintained throughout the series. He made the most of the mysterious Kuldeep Yadav. He showed gumption in the first innings. He held 4 catches, at least 2 of which were outstanding. And after India lost 2 quick wickets during the chase, he came out all guns blazing, treated the Australian fast bowlers with disdain, and probably made sure the vendors at the ground had to sell their food at discounted rates.

The think-tank took a risk by including Kuldeep for Kohli in the Test. They were richly rewarded way before they had expected to, on the first day. Not only did he deceive batsmen with his variety, he also kept them on a leash with his impeccable control, something probably not expected of a man thrown to the lions in a crunch situation. Apart from Smith, Matthew Wade seemed the only one to pick Kuldeep s googly. Of course, like all mystery bowlers, he will have to prove himself once the batsmen decipher him, but that can wait. He gets half a point for making people Google with the word Chinaman .

He got Smith in the second innings at Dharamsala. He had David Warner dropped in each innings. Despite not being at his best in the first innings, Bhuvneshwar tested the batsmen in the second in the only Test he got. However, his time will come once India plays in more favourable conditions.

Vijay did look out of sorts at times throughout the series. Of the 113 runs Vijay scored, 82 came in one innings, but that was the flattest wicket of the series, at Ranchi. He seemed set for a double-hundred that day before he threw it away with a reckless attempt. He gets an extra point for his 6 catches, at least 2 of which were difficult.

Law of averages? Perhaps, but Kohli would probably not rue his failure, not only because India have clinched the series, but also because he will also miss the beginning of the IPL. He has bigger things to take care of. He fielded superbly.

Yet another series passed by with Ishant bowling well without taking wickets. One can only wonder how long he will be persisted with. He gets half a point for his outrageous facial expression at Smith that sent social media into splits: they are still coming out with new memes.

Batted with purpose in the first innings at Bengaluru, but that was about it. The Australian fast bowlers exposed his technique towards the end of the series. He also loses points for his dropped catches.

It is easy to blame Mukund, but coming out of nowhere to take on a rampant side on a high is never easy. He will have to wait for one of the openers to miss out again provided he is retained in the squad.

The third Yadav of the side looked a shadow of the England series. He looked incapable of handling a rank turner while batting, but his lacklustre show with ball on the same pitch cannot be defended. None of the 2 wickets he got at Pune were earned.

Shreyas Iyer deserves a mention for his spectacular run out of O Keefe in the Dharamsala Test. 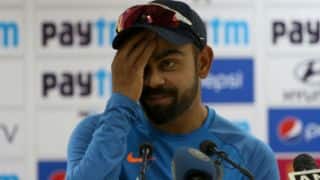