Finch has faced 30 dot balls from Bhuvneshwar this series, out all three times to him.

Australia’s limited-overs skipper Aaron Finch is in the middle of a batting funk, and Bhuvneshwar Kumar has his number like few bowlers have in ODIs.

Finch’s dismissal to Bhuvneshwar for 14 on Friday was the third ODI in a row that he’s fallen to the seamer this series, and lowered his batting average in one-day cricket since Australia resumed playing in November to 13.83. (LIVE UPDATES: INDIA vs AUSTRALIA, 3rd ODI)

In the first two ODIs, Finch was bowled by Bhuvneshwar for scores of 6 and in the third he was out lbw for 14, again beaten for inwards movement by a sharp inswinger that kept low and thudded into the front pad. That capped a wicket-maiden over for Bhuvneshwar, who overall bowled 18 dot balls to Australia’s captain on Friday.

That took his series returns against Bhuvneshwar to three dismissals in 37 balls, from which he has scored 16 runs for an average of 5.33. Tellingly, of the 37 balls from Bhuvneshwar that Finch has faced, 30 have been scoreless. (ALSO READ: Frustrated Finch promises natural aggressive game in 3rd ODI)

In T2oIs, since he smashed a record 172 versus Zimbabwe last July, he has gone 11 innings with a best of 47 while seven times being dismissed between 0 and 7. Test matches included, Finch has two fifties in 27 innings across all three formats since July 2018. 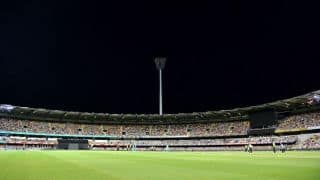