Kohli has been spot-on with several of his decisions, most notably pertaining to positioning of fields.

SYDNEY: Awash in pink on Jane McGrath Day, the Sydney Cricket Ground was bathed in precipitation as a seriously hot Saturday morning gave way to a far pleasant evening marked by continual cloudbursts, even if that came at the expense of an hour and a half of potentially gripping cricket.

India’s spinners had tied up Australia’s batsmen in tricky knots on day three of the final Test, the two vastly contrasting left-armers pushing their side ever so close to the series triumph that is now just a formality. Between them, Ravindra Jadeja and Kuldeep Yadav, playing his first game of the tour, took five wickets as Australia stumbled to 236/6, still 187 away from making India bat a second time. (ALSO READ: Kuldeep, Jadeja undo Australia’s spark on rain-truncated day)

The only wicket not to fall to a spinner was that of Marnus Labuschagne, the right-hand batsman drafted in for this game and batting at No. 3. That scalp went to Mohammed Shami, just beginning to get the 50-over ball to reverse, if only gently. It was as much Shami’s wicket as it was Ajinkya Rahane’s, the fielder holding on to a sharp catch at a short, squarish midwicket.

While Shami and Rahane were the executors, the mastermind of the dismissal was Virat Kohli. In the past, the Indian skipper has been prone to reactive ball-following, but on this tour of Australia, he has been a lot more proactive with his field placements. Or, maybe it appears that way because his fields have yielded results. However you look at it, there is no denying the fact that Kohli had a big hand in Labuschagne’s dismissal for a well compiled 38 marked by solid defence and pleasing stroke-play. (ALSO READ: The best and worst from Day 3 of Sydney Test)

With reverse beginning to make its presence felt and not much happening off the seam, India’s fields mirrored reality. There was no umbrella-like slip cordon; there was just a lone slipper, with a gully for company. The other attacking options were both in front of the stumps on the leg-side, two short mid-wickets almost within touching distance of each other.

Labuschagne was able to pick Shami off for the occasional single by playing through straightish mid-on, almost making the two short mid-wickets redundant. Soon, Kohli moved himself a little straighter to short mid-on, thereby cutting off that scoring area. Rahane, the other short midwicket, moved slightly to his right to open up a reasonably tempting gap between the two close catchers.

On cue, Shami delivered a full ball on Labuschagne’s pads. Aware that the down-the-ground route had been slammed shut, Labuschagne went a bit squarer with his flick, but the wrists didn’t come into play enough to keep the ball totally down. The reversing ball took the stroke a little more square than the batsman had intended, and there was Rahane, bending low to his right to pick up the ball almost off his bootlaces and sending waves of euphoria in the Indian ranks.

Kohli was particularly cock-a-hoop. Smart fields don’t always hold the guarantee of success, but when a wicket falls exactly one ball after you have made subtle changes, it triggers an adrenaline rush matched by few other events. The score board will read Labuschagne c Rahane b Shami 38, but it won’t tell the whole tale. Then again, the score board seldom does that, does it?

Throughout this tour, Kohli has visibly grown as a captain. That’s not being said against the backdrop of the 2-1 score line. India have played the better cricket on a more consistent basis, agreed, but Kohli too has been spot-on with several of his decisions, most notably pertaining to positioning of fields.

Even in Melbourne, the dismissal of Aaron Finch had a distinctive captaincy touch to it. Mayank Agarwal was placed at a very short mid-wicket to the right-hand batsman with a clear proclivity towards chipping the ball softly in the air in that direction. At first glance, it appeared a slightly optimistic punt because Agarwal seemed too close to the batsman to hold on to anything but a gentle lob, preferably from inside-edge on to pad. But Kohli had got not just the positioning but also the placement just right. Any further back, and the ball would have fallen tantalisingly short of even the sprawling, diving fielder. Even an inch to his right, and it would have been elusive to the fully outstretched left hand.

Finch obliged by flicking Ishant Sharma in the air, Agarwal completed the sequence by diving low to his left to pouch the offering. Like with Labuschagne on Saturday, that was a three-man effort too, smart planning complemented by faultless execution.

Captaincy is not an exercise by rote. It’s not about working long hours with the backroom staff, formulating game plans, and then following them to the T in the middle. It is in thinking on one’s feet, and shaking up pre-worked strategies according to the needs of the situation, that the true ability of a skipper comes to the fore. Funky fields are fine for a while just to con batsmen into thinking you are on to something when you actually aren’t, but they don’t serve any genuine practical purpose apart from providing the funk. It’s in the inspired flashes of genius that bring something meaningful with them that captaincy is elevated from precise science to fine art.

Already numerically India’s second most successful captain behind Mahendra Singh Dhoni, Kohli is gradually on the road to cementing his standing as a tactician too. He has shown his adeptness at customising his normally attacking batting to meet the needs of the situation and conditions, a facet that has revealed itself repeatedly during this tour. If he continues to allow his tactical and strategic skills as well to develop and flourish, he will be every bit the captain fantastic that the numbers attest to. 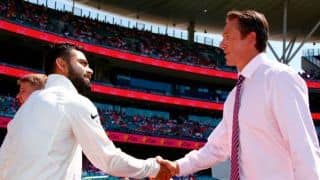