The best and worst from Day 2 of the Perth Test

The best and worst from Day 2 of the Perth Test

The best and the worst from day two of the second Test between Australia and India at the Optus Stadium in Perth.

The best and the worst from day two of the second Test between Australia and India at the Optus Stadium in Perth.

Mitchell Starc bowled a ripper of a delivery in the first session to get rid of Murali Vijay for a 12-ball duck with a fuller length delivery that swung in late and found space between Vijay’s bat and pad to crash into the stumps. It was a classic Mitchell Starc dismissal and had India 6/1 heading in to lunch. There could not have been a better delivery.

However, Hazlewood trumped his fellow Victorian to sent back Rahul for two, early in the second session with a pitched up delivery on the stumps. The opener shaped for a flick only to see the ball seam away after pitching. He was beaten all ends up and the timber was rattled. One up for Hazlewood over Starc.

Watch both the dismissals below and decide for yourself:

Does it get better than thispic.twitter.com/gLHeepo0WH

With India under the pump at 8/2, Virat Kohli walked in at the fall of Rahul and that walk hinted at intent. Off the second ball he faced, the Indian skipper latched onto an over-pitched delivery and with perfect timing executed a text book cover drive off Hazlewood. The shot pretty much laid the blueprint of what Kohli was going to do. At the close of play, he is batting on 82 off 181 balls.

This was all class from Virat Kohli on the second ball he faced!#AUSvIND | @MastercardAU pic.twitter.com/2iMu2L0u1m

Stat of the day – Hazlewood and golden ducks

The Perth Test is Hazlewood s 41st Test match, and for a someone coming to bat at No.10 and 11 on a regular basis he is a decent enough bat. He may have a Test batting average of just 12.50, but what was remarkable was he never got out for a duck in his Test career, until last week. In Adelaide, the tall and strapping fast bowler was undone by Mohammad Shami off the very first ball. His first golden duck in Tests. And today, Hazlewood nicked his first delivery to Rishabh Pant off Ishant Sharma, to register his second golden duck in one week.

Tweet of the day – Rahul and Vijay in the dressing room

Do we need say more?

Reprieve of the day – Hazlewood over-steps

No-ball calls, or the lack of it, against Ishant Sharma in Adelaide were picked up by the Australian media. Reportedly, Ishant had as many as 22 no-balls that was not called by the umpire/umpires. And in Perth, Ishant was called for a no-ball, when replays clearly suggested that he hadn t overstepped.

But Hazlewood also found himself in a similar good fortune when umpire Chris Gaffaney missed a big no-ball in the 48th over of India s innings – Hazlewood s 13th over. No damage was done however, as Hazlewood s good-length delivery at the fourth stump was left alone by Ajinkya Rahane. 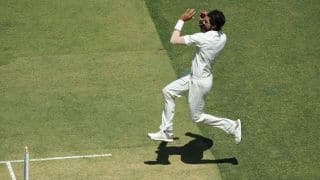