The best and the worst from day four of the second Test between Australia and India at the Optus Stadium in Perth.

Resuming the day at 132/4, Australian duo of Usman Khawaja and Tim Paine added 58 runs in the first session to extend the lead to 233 and that partnership seemed to be taking the game away from India. However, in the first over of the second session, Mohammad Shami turned it around taking 4 wickets in the session as Australia collapsed from a healthy, 192/4 to 207/9.

And the collapse was started with snorter of delivery from Shami to Paine. This was a bouncer and Paine had nothing he can do. It was aimed straight at his head and he tried to fend it off while jumping. The ball came off his glove and lobbed up for a simple catch to Virat Kohli who came running in to his left from second slip.

Ajinkya Rahane walked in to bat with India at 48/3 and with Australian bowlers Nathan Lyon and Mitchell Starc in the middle of a probing spell. Starc peppered Rahane with the short stuff early on, but he was not going to back down. Similar to how he got off to a breezy start with some enterprising shots in the first innings, Rahane took on Starc in the second innings as well.

After facing just 10 balls, Rahane was tested with a bouncer and he threw his bat at it and the ball flew towards Mitchell Marsh (sub) positioned at third man and went over him for a six.

KL Rahul was cleaned up by Starc early in the second innings as his torrid time Down Under continued. He was picked up by Hazlewood in the first innings, cleaned bowled. His second innings dismissal was the seventh occasion in his previous 11 innings that he got out bowled. But this is not the stat of the day.

“And they thought KL Rahul is a better opener than me” – Shikhar Dhawan #AUSvIND #INDvAUS #INDvAUS @SDhawan25 @imVkohli pic.twitter.com/WlKPaatcoS

Duel of the day

Tim Paine wins this one 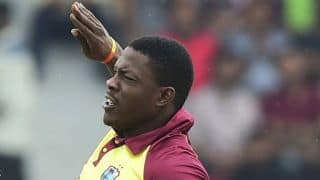 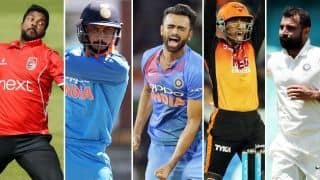