The Saurashtra giant has stacked up some towering numbers over the last month, none more impressive than the time he has spent in the middle while accumulating 521 runs in seven innings this tour

Aren t you bored yet? Nathan Lyon cheekily asked him, immediately after he had brought up his century in the final session of Thursday s (January 3) play at the SCG. (ALSO READ: Australia vs India Live Score, 4th Test match)

Cheteshwar Pujara smiled at the Australian off-spinner, choosing to keep his thoughts to himself. If he were a practiced user of the lip, he might have countered, Are you? Are you bored of seeing me at the crease? Are you tired of my broad blade? (ALSO READ: Cheteshwar Pujara s marathon, Rishabh Pant s landmark and other key stats from the SCG)

And Lyon, definitely echoing the sentiments of his bowling comrades, would enthusiastically, pleadingly, have replied, Yes, yes and yes. How can you not be, when you have seen this man scored three hundreds in four Tests and bedded down at the crease like his very survival depended on it. (ALSO READ: Rishabh Pant first Indian wicketkeeper to score a Test century in Australia)

It s fair to say that Pujara has ground Australia into submission this series. He hasn t brutalized, but he most certainly has traumatized the hosts. And he has done it the old-fashioned way, with dogged determination and peerless patience, living in his own bubble of faith and belief and soldiering on with the conviction that his best is some distance better than the best his opponents can throw up. (ALSO READ: Patient Cheteshwar Pujara surpasses Dravid, Sutcliffe for most balls faced in Australia)

The Saurashtra giant has stacked up some towering numbers over the last month, none more impressive than the time he has spent in the middle while accumulating 521 runs in seven innings this tour. He has occupied the crease for a mind-boggling 1,869 minutes, which is at least a good 1,000 minutes more than what any of Australia s batsmen have managed. Those 1,869 minutes translate to 31.15 hours; effectively, Pujara has batted the entire duration of one Test match and more. Sick, tired and bored of Pujara, Nathan? Of course.

Lyon has bowled the most to Pujara, but Mitchell Starc, Josh Hazlewood and Pat Cummins too have faced the full defensive fury of his bat in the early part of his innings, and the sweet timing off the blade when he has his eyes set and his mind on getting the scoring rate going. If there were such a thing as a bowlers union, they would have collectively gone on strike by now. They might point to Pujara s steadfast occupation of the crease as a health hazard; after all, only so much toil is possible in extreme heat, and especially so when confronted by an unforgiving, relentless aggregator with the mind of a machine and the heart of a warrior.

In fusing the mechanical with the all-too-human, Pujara has hit upon a formula that has worked awesomely for him. It s a formula unique to him; more importantly, it s a formula devised around his uniqueness. In as much as the quantum of runs he has scored, and the impact it has had on the series, it s that which will delight Pujara the most that he has succeeded by being himself, not trying to cow to extraneous pressure and mould his game to suit the expectations of others, if not necessarily the requirements of the team.

In Pujara s bloody-minded pursuit of his goal lies a life lesson for the less gifted. He doesn t paint the pretty-boy pictures, he doesn t wield his willow like a free-stroking brush that lights up the canvas with the most incandescent images. Pujara makes batting look exactly what it is bloody hard work against excellent bowlers, but doable if you put in the hard yards, avoid the short-cuts and steer clear of the compromises.

The bogey of overseas failures has now been shrugged away, he can no longer be accused of being a home-bred, home-performing hero. The dark days when his Test future dangled uncertainly can you even imagine that? are a distant memory, the gathering clouds of doubt instilled from the outer but mushrooming into strangulating entities exploded with a million waves of the willowy sceptre.

In Australia, they don t know what to make of Pujara, the smiling assassin for whom no one seems to have an unkind word. They love to hate, and occasionally love, Virat Kohli. They love being entertained by Rishabh Pant. They watch on in wonderment when Jasprit Bumrah works their batsmen over, amazed at the success he has courted despite his unusual action and his uncoachable run-up. But of Pujara, they know not what they feel. Except admiration for his dedication to his craft, and respect for the sincerity with which he goes about it.

Pujara is not a man on a mission of the pursuit of perfection. At the risk of sounding blas , perfection is overrated, its pursuit an exercise fraught with heartbreak and unforgettable disappointment. The chase of perfection comes with a huge price-tag; Pujara has been around long enough to know that while perfection is a wonderful attribute, it isn t a real-life trait, commonplace or otherwise.

Pujara s quest, instead, is to be the best version of what he can be. Just because he is driving the run-counter crazy doesn t mean he has made wholesale changes to his game, or found a mysterious but potent potion of mental tonic. Pujara is doing pretty much the same things he did before, when he was scoring bucketful of runs at home and not so many away. But when you do the same, correct things over and over again, driven by passion and patience but also by fair play and sportsmanship and decency and dignity, the cricketing Gods will smile down benevolently. Pujara s success is largely of his own making, but a little help never hurts.

His 18th Test hundred spanned eight minutes over nine hours, as Australia s bowlers wilted, until he fell victim to the nervous 190s. Pujara took particular note of how knackered Lyon in particular looked, as early as midway through day one. The arm wasn t getting as high up as previously, the tired fingers weren t imparting as many revs to the ball as they had in Adelaide and Perth. 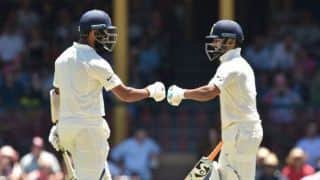