David gets an extra point for smartly using his resources in the only T20I they won and taking a brilliant catch running behind.

Steven Smith was ruled out due to shoulder injury before start of the series. He was seen carrying drinks and messages in the first match, but the management soon sent him home for recovery. At the helm was David Warner. He gave his all to revive Australia s hopes, but his leadership did not change the momentum: India won the Ranchi T20I by 9 wickets (DLS). However, it was in the second encounter that Australia thumped India by 8 wickets, thanks to Jason Behrendorff s four-wicket haul. The third and final match became a decider. As both teams headed to Hyderabad, they were welcomed by the uninvited rains. Their fun was further dampened, as the match was abandoned due to wet outfield. The series drew 1-1.

Let us rate each Australia on the basis of his performance.

David Warner (3/10): He got off to a rampaging start in the first match, smashing consecutive fours off Bhuvneshwar Kumar; but the Indian pacer outfoxed him with a knuckle ball. In the second match, when Australia needed a mere 119 runs, Warner played an uncharacteristic stroke. In all, he scored 10 runs in two innings.

He gets an extra point for smartly using his resources in the only T20I they won and taking a brilliant catch running behind.

Aaron Finch (7/10): Finch was the only bright aspect in an otherwise mediocre batting performance at Ranchi. Had he not scored 42, Australia would have been bundled out way under 100 runs. He tried to emulate the same in the second match, but Bhuvi varied his length to have him caught at extra cover.

Glenn Maxwell (0.5/10): Maxwell scored 17 off 16 deliveries in the only innings he batted. Promoting him at No. 3, Australia wanted him to take apart the Indians with his variety of strokeplay. However, Kohli introduced Yuzvendra Chahal to feed on Maxwell s confidence. The leg-spinner yet again won the race, making Maxwell his bunny for the fourth time in the limited-over series. After the failure, he was pushed down the order.

Moises Henriques (7.5/10): Henriques replaced Maxwell at No. 3, and Australia were at the doorstep of victory. He was sent to provide stability than aggression. The ploy worked as Henriques scored an unbeaten 62.

Travis Head (6/10): Like Henriques, Head failed in the series opener but made amends in the next match. His 109-run stand with Henriques gave his team a comprehensive 8-wicket win, levelling the series 1-1.

Marcus Stoinis (6/10): He did not get to bat in the only match he was drafted, but ended with impressive bowling figures of 4-0-20-1. He would have added more sparks had Australia selected him ahead of Daniel Christian.

Daniel Christian (1/10): When he came to bowl, India need 6 off the last over. With Shikhar Dhawan and Kohli at the crease, the task was nothing but a painful, uphill climb. India finished the match in 3 balls. Otherwise, he scored 9 off 13 before getting run out to a brilliant Kohli-throw.

Tim Paine (4/10): He batted only once, scoring 17 runs. But it was MS Dhoni s stumping that he gets extra points for. It was the first instance when Dhoni got stumped in the shortest format. Tim did well to inflict pain on Dhoni (this pun never gets old).

Andrew Tye (4/10): He could take only a wicket, conceding runs at 8. It would be unfair to judge bowlers on the basis of two matches in a batter-friendly format.

Jason Behrendorff (10/10): His first over in international cricket produced 5 runs. In his next assignment, he took 4 wickets Rohit Sharma, Shikhar Dhawan, Virat Kohli (his maiden duck in the format), and Manish Pandey. He ended with figures of 4 for 21, earning himself the Man of the Match award. 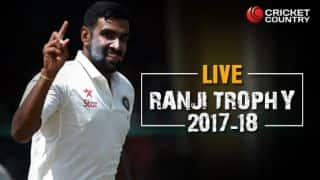