India got to 303 despite a middle order stutter, powered by Rohit Sharma's 137.

Solid start: Rohit Sharma started things off with a four off the first ball. In partnership with Shikhar Dhawan, he helped India get off to a good start as they scored fifty inside the first ten overs. To begin with, the two batsmen were only picking boundaries as they played some good cricketing shots. India eased into the game with this partnership, although there were sterner tests lying ahead of them.

Bangladesh pull things back: After India started well, Bangladesh pulled things back and restricted the rate of scoring. Shakib Al Hasan and Rubel Hossain were on song as they bowled in the tight channels to restrict India’s scoring rate. Dhawan was dismissed off Shakib for 30 and then Virat Kohli was caught behind off Rubel. Ajinkya Rahane scored 19 off 37 balls and was dismissed when he tried to play an aerial shot. When Rahane was dismissed, India were 115 for three in 28 overs, under pressure to get going. IND vs BAN, 2nd Q/F: Virat Kohli dismissed for 3 by Rubel Hossain

Suresh Raina’s vital knock: Suresh Raina’s innings of 65 off 57 balls infused much needed energy into the Indian innings. Raina took his time to get in, but was attacking in the batting powerplay. In the leadup to the game, he had said that he needs to play a few deliveries and get set if he foes in before the batting powerplay. He played some wonderful strokes which helped India get going and by the time he was dismissed, they were well on course to a big score.

The DRS debate again: When Raina was on 10, he was hit on the pads by Mashrafe Mortaza in the 34th over. The umpire was unmoved, and the Bangladesh captain referred the decision. On the first look, it seemed out as it hit him in front. However, the ball trackers showed that it had pitched a little outside leg and hence had to go to the umpire’s call. Had the umpire given it out, Raina would have been on his way as the DRS would have backed the umpire’s decision either ways. CONTROVERSY! Rohit Sharma saved as Bangladesh robbed in World Cup quarter-final

The no-ball: On 90, Rohit got a high full-toss from Rubel. He pulled it to square-leg, who took the catch quite comfortably. However, the umpire called it a no-ball for height. On seeing the replay, one may have felt it would have gone the other way for it was on his waist and not above it.

Rohit Sharma’s century: Rohit got his second century at the Melbourne Cricket Ground (MCG). It was an innings of character as he kept India together. Although Bangladesh were bowling well, he did not let it get to him and batted through the innings. While his first fifty came off 70 balls, the next came off only 38 balls. He gradually increased the tempo and that helped India get to the 300-mark. Rohit Sharma scores 100, only behind Ricky Ponting as he sets Indian record during ICC World Cup 2015 quarter-final 2

Ravindra Jadeja’s assault: Ravindra Jadeja picked boundaries in the end to help India cross the 300-mark. Rohit had been dismissed and India needed Jadeja to smash it around and help them overhaul that mark. He got his 23 runs in only 10 balls, which could be a crucial knock in the end. 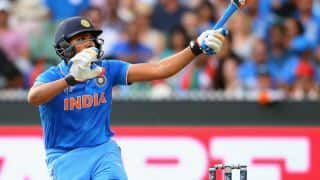