Currently, India are 79 for the loss of two wickets in 18 overs with opener, Rohit Sharma batting on 40.

India’s vice-captain, Virat Kohli failed to make an impact after he was dismissed for mere three by fast-bowler, Rubel Hossain as he was caught-behind by Mushfiqur Rahim, against minnows, Bangladesh, in the 2nd quarter-final of the ICC Cricket World Cup 2015 at the Melbourne Cricket Ground (MCG) in Melbourne on Thursday. Currently, India are 79 for the loss of two wickets in 18 overs with opener, Rohit Sharma batting on 40 and Ajinkya Rahane coming in. Live Updates: India vs Bangladesh 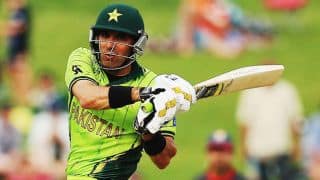