Kuldeep and Chahal would look to exploit the weakness of English batsmen to read wrist spin by sticking to the basics and bowling a nagging line.

While Virat Kohli & co. would be high on confidence aiming for an unassailable lead in the 2nd T20I, England will be desperate to put the scares of the last game aside and put up a more determined show at Sophia Gardens, Cardiff on Friday. India were all over England in the first T20I with Kuldeep Yadav and KL Rahul ruling roost, and unless England turn things around quickly, that is not going to change.

It will be safe to assume that the Indians would continue with the same lineup in the second game with KL Rahul at No. 3 and Virat at 4, a move that turned out to be a masterstroke by Kohli. He accommodated an unusual change by sacrificing his place and promoting Rahul, who eventually made the chase a cakewalk for the Men in Blue with his century.

Kuldeep has performed exceedingly well in T20s. He currently stands as the third-leading wicket-taker in T20Is played in 2018 with 36 scalps in 26 outings. With Bhuvneshwar Kumar going for 45 in his 4 overs in the last match, Kohli may be tempted to give Deepak Chahar his debut match at Cardiff in Bhuvi’s place. Chahar is the fifth-leading wicket taker in T20s (29 wickets in 21 matches), though the senior man is almost likely to retain his place.

While England need not worry about their one poor performance, they need to be wary of the Indian wrist-spinners. England have been a successful T20 side in recent times and have thrashed second-ranked Australia a couple of weeks ago. Carrying the same confidence in the upcoming battle, the English middle-order will look to upskill their attacking game for the upcoming challenge from the wrist-spinners, especially Kuldeep, who destroyed the English top-order with his subtle wrist variations in the first game. Kuldeep and Yuzvendra Chahal would look to exploit the weakness of English batsmen to read wrist-spin by sticking to the basics and throwing in the right mix of variety in their deliveries.

Jos Buttler and Jason Roy had shown guts the other night before the others just fell like a pack of cards. Buttler has been in phenomenal form over the last couple of months. He had a fantastic season in the Indian Premier League 2018 with Rajasthan Royals, with 548 runs at a strike rate of 155 and an average of 54.80. He will look to continue his great form and help his team present a better challenge on flat Cardiff deck. With a deep batting line-up and a bunch of all-round performers in the team, it is difficult to rule England out.

As far as bowling is concerned, England may want to give Sam Curran a chance in place of Liam Plunkett, who proved expensive for his 4-0-42-0. Curran was released by ECB to play for Surrey against Middlesex in the Domestic T20 Blast, which may serve as ideal match preparation efore a key encounter against the formidable Indians.

Predictions: India would look to roll on the juggernaut in the second game with their wrist-spin pair of Chahal and Kuldeep. England, on the other hand, will draw confidence from an expectedly good batting deck at Cardiff. All eyes will be on how the English batsmen face up to the Indian wrist spinners. One should ideally expect a tough fight between two fairly evenly matched sides in the shortest format of the game. 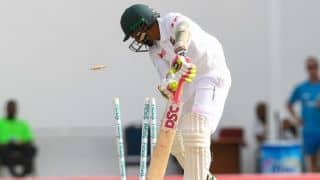