However, just like it has happened many times with Bell, since that series, he has struggled to get going.

Since The Ashes 2013 played at home, Ian Bell has struggled to do well. Bharath Ramaraj wonders whether England’s best batsman can comeback to form against India in the second Test at his happy hunting ground, Lord’s.

Ever since Ian Bell made his Test debut against the West Indies at The Oval in 2004, it has been crystal clear that here was one batsman throbbing with heavy dollops of skill and talent. Despite touching celestial heights on occasions, he has struggled to achieve that stamp of permanence which you associate with a great batsman.

Last year in The Ashes 2013, Bell, with filigree craftsmanship and lissom grace took one’s breath away and compiled three hundreds. He played late cuts with glee, as Michael Clarke had a forlorn look on his face. In fact, when with his sublime mastery those caressed strokes whisked away past bemused fielders to the boundary boards, he seemed to be toying with the Australian setup. For a moment, it felt like he could even bat like batsmen of yore without those fancy accoutrements and still essay a century.

However, just like it has happened many times with Bell, since that series, he has struggled to get going. He has notched up just 397 runs at an average of 28.35. These aren’t figures of a player who is the best batsman in the team.

There is a feeling that with Kevin Pietersen being dumped and Alastair Cook in wretched form, Bell is struggling to lead from the front with the bat. Pietersen was for the most part of his career, England’s best player and opposition ranks targeted him.  Nowadays, opposition camps seem to be targeting Bell and Cook, as, if both of the senior pros don’t score runs, it puts more pressure on the younger lot.

Curiously, it isn’t like Bell has looked out of form. Yes, he has got out to the delivery that shapes into him and ‘dry length’ bowling a few times. It must be remembered that even during the early part of his career such tactics have been used against him.

This isn’t the first time that Bell has gone through a lean patch. After 2010 and 2011 turned out to be an annus mirabilis for him, Bell struggled for runs for a long period. Actually, when England toured United Arab Emirates (UAE) to play Pakistan in 2012, he couldn’t buy a run. However, he waded through that difficult period to comeback to rip-roaring form.

The silver lining for Bell is that he has aggregated 1,205 runs at an average of 57.38 and has made four centuries at Lord’s. It is also the ground, where England will meet India in the second Test.

The era of tall pacers running in from the pavilion end and using the famous slope at Lord’s to nip the ball back into a right-hander seems to be a thing of the past. If not anything else, India certainly don’t have a Curtly Ambrose or a Glenn McGrath to do that. Of course, Ishant Sharma can perhaps match them in height, but not in terms of class. So, this is a great chance for Ian Bell to play a knock glittered in diamond and find back his touch. 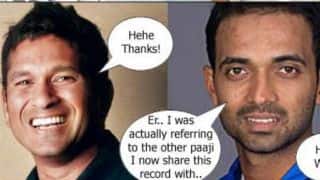 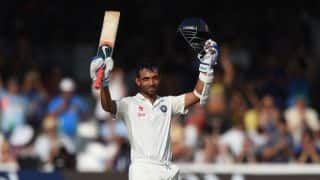 Indians on Lord's Honours board