Nothing can go wrong when you have your mother's blessings behind you. At least that is what we got to learn today. For the first time in international cricket, Indian players had their mother's name on their jersey back.

Nothing can go wrong when you have your mother’s blessings behind you. At least that is what we got to learn today. For the first time in international cricket, Indian players had their mother’s name on their jersey back. Chandrakala’s son Amit Mishra bagged a five-for while Saroj’s son Virat Kohli and Purnima’s son Rohit Sharma scored vital fifties to helped the Devaki-born MS Dhoni lift the trophy after winning the series against New Zealand 3-2. New Zealand, who had so far shown a good fight in this series, collapsed from 63 for 2 to 79 all out to concede the game to India. Full Cricket Scorecard, India vs New Zealand, 5th ODI

Mishra was phenomenal to say the least. The Kiwis were clueless against Mishra’s variations as India managed a 190-run victory, their biggest margin against a major cricketing side. This is their fourth biggest margin in terms of wins by runs. The top four were against Bermuda, Hong Kong and Bangladesh. This also happens to be India’s first major ODI series win in two years. India last won an ODI series barring Zimbabwe, in November 2014 against Sri Lanka. And under Dhoni, their last major ODI series win came in October that year, against the visiting West Indies. While India claimed the series 3-2, Suvajit Mustafi presents you with a couple of match highlights.

A delayed Mother’s Day celebration: Fans who tuned in to watch the match after the toss were in for a surprise when they watched Purnima and Sujata walk out to open the batting for India. It then occurred to them and reminded them of the ads by the broadcaster that have been running long, featuring Dhoni, Kohli and Ajinkya Rahane.

If a mother is behind, even Rohit Sharma can make 50 irrespective of form! He just brought 29th ODI 50!#indvsnz #INDvNZ pic.twitter.com/XXrTZYq4YS

Yes, Rohit’s mother’s name is Purnima while we have heard from the ads about the sacrifices Rahane’s mother made during his childhood. As a part of the broadcaster’s marketing campaign, the Indian side sported names of their respective mothers on their jersey. Dhoni at the toss said, “We are quite used to having the surnames from the Dad’s side, and what’s important is to appreciate the stuff that Mothers have done for us.”

On an Amavasya (new moon) day, Purnima’s (full moon) son shone bright and scored 70 from 65 balls. Okay. This bit was not needed. A unique initiative, indeed!

Ross Taylor and order of dropped catches: It was that kind of a day for New Zealand on the field. Ish Sodhi, who had dismissed Kohli at Ranchi, dropped Kohli’s caught and bowled chance when he was on 8. The Indian run-machine registered his 38th ODI fifty and made him pay by scoring 65. However the drop of the day belonged to Ross Taylor.

Yes, once again the former Kiwi skipper was in the middle of the action. Rohit was batting beautifully on 66 and looked set for a double ton (that is what he does in this time of the year). At short midwicket, Taylor dropped a relatively easy chance.

Good for Taylor that Rohit did not make it count and departed for 70 soon.

Dhoni and sweep shots: When Dhoni’s biopic’s trailer showed Sushant Singh Rajput (who played Dhoni in the film) playing a sweep shot, that bit received a lot of criticism because that is a shot that the Indian captain usually does not play. The paddle sweep apart, rarely have we seen Dhoni play a conventional sweep.

In the 29th over, off the bowling of Mitchell Santner, Dhoni powerfully swept one for a boundary. He was not done. Nine overs later, the ball after Kohli registered his fifty, Dhoni tried to employ another sweep off Santner but chose the wrong ball. The ball straightened after pitching and Dhoni missed with the leather striking him on the front pad. He was dismissed leg before for 41.

Don’t angry, Saroj Virat: Kohli’s fury is well-known. A much reserved man now, he has worked hard on keep his tongue and middle-finger in check but we got a glimpse of the primitive Kohli while he was batting with Kedar Jadhav.

In the 41st over when Kohli was batting with his Royal Challengers Bangalore (RCB) teammate Jadhav, Kohli played a tennis smash shot in the region of midwicket and yelled “two” but his partner was casual in his approach and refused the second run. Kohli was visibly livid. Jadhav was at the receiving end of his fury as Kohli gave him a mouthful and it was not forgotten for a while.

The well-read Visakhapatnam fan: No offence to anyone but Indian cricket fans in general are more obsessed with their cricketers than anything else. The idea of coming to the ground might be watching Kohli, Dhoni, Rohit smash sixes and the players waving at them. There was someone who stood out amongst the many passionate fans who turned in numbers at the ground.

Chris Donaldson still holds the national record in New Zealand in the 200m category. The 41-year-old Olympian is New Zealand’s strength and conditioning coach and guess what here is someone at Vizag, who idolises him.

This was brought to our attention from earlier today.A local fan paying homage to our trainer & former Olympian Chris Donaldson! #INDvNZ ^WN pic.twitter.com/iGy3A2P0b2

The all-time India XI openers club: Virender Sehwag was at his usual best in the commentary box. When Taylor dropped Rohit, Sehwag cold not stop referring Taylor as ‘tailor’, who is missing catches as he is busy with stitching order. Leave that. That is how weird and typical Sehwag can get. However, it was pleasing to see all commentators in their Diwali attire but Sehwag was in a bright navy blue pathan suit with white dots.

He posed for a selfie with fellow commentator and legendary batsman Sunil Gavaskar, which was later flashed in giant screen. It’s a happy club of openers. Gavaskar and Sehwag, though contrasting in playing styles, will walk into any all-time India XI as openers.

Umesh Yadav castles Martin Guptill: One of the highlights of this tour has been Umesh Yadav against Martin Guptill. The Indian pacer triumphed on most occasions silencing the Kiwi opener. In the previous game, Guptill’s counterattack helped him prevail over Umesh but the Vidarbha pacer came back strong in this match and almost produced the Delhi-ripper that cleaned up Guptill.

Umesh pitched it on good-length, kept Guptill on back foot and played for the incoming angle. The ball moved away, beat his bat, grazed his pad on its way to stumps. It had squared him off. What a ripper! New Zealand were forced to back foot right away.

Virat Kohli, Kane Williamson and co-incidences continue: Kohli and Williamson were skippers of their respective sides during the Under 19 World Cup 2008, where the former’s boys conquered the latter’s in the semi-final. Over the years, these two boys rose in stature and are regarded as two of the finest batsmen in the globe.

Williamson tried to play an inside out lofted stroke to an Akshar Patel tossed up delivery. Jadhav at wide long-on took the catch. The wicket triggered the New Zealand batting collapse. Even collapse is an understatement here.

Earlier in the day, Kohli went for an inside out drive against the leg-spin of Sodhi and found Guptill at long-off. The slowness of the surface got the better of both these champion batsmen in this case.

The ‘googly’: New Zealand were struggling at 66 for 4 when Taylor departed edging a Mishra ball straight into Dhoni’s gloves. Two balls later, Mishra bowled a loopy delivery at length good enough to drive and Watling was tempted to come in the front foot being fooled into believing that it was a leg-break. The stumps got rattled as the ball sharply spun back in between bat and pad. A Shane Warne moment. No, let us call it a Mishra moment. He now has 69 ODI wickets at 22.16! Undoubtedly, the best numbers by an Indian bowler with over 50 wickets in ODIs.

Mishara 5 for 18 won him the Man of the Match award and his overall scalp of 15 wickets from 5 ODIs saw him walk away with the Man of the Series award. Incredible.

(Suvajit Mustafi consumes cricket for lunch, fiction for dinner and munches numerous other snacks throughout the day. Yes, a jack of several trades, all Suvajit dreamt of was being India s World Cup winning skipper but ended up being a sports writer, author, screenwriter, director, copywriter, graphic designer, sportsmarketer , strategist, entrepreneur, philosopher and traveller. Donning so many hats, it s cricket which gives him the ultimate high and where he finds solace. He can be followed at @RibsGully and facebook.com/rivu7) 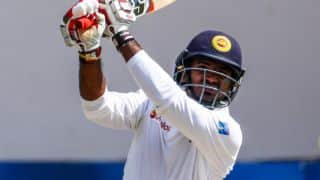 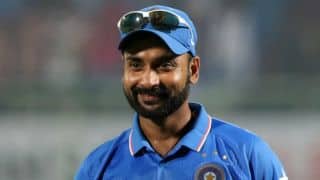 Amit Mishra: Anil Kumble's mental support is the biggest thing for me